Daily Skimm: Impeachment, Cuba, and When Four Seconds Is a Good Thing 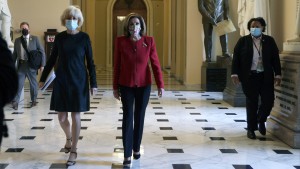 One Way or Another

Calls for President Trump to leave office are growing louder.

It's been less than a week since the deadly siege at the US Capitol. Now, House Democrats – who accuse Trump of inciting the mob attack – appear to be pulling out all the stops to try to boot the president before his term ends in eight days. This week, there are two efforts in play to remove Trump from the Oval Office.

First up: getting VP Mike Pence to invoke the 25th Amendment. That's the one that allows the VP and Cabinet to remove a president if he's deemed unfit for office. If invoked, the VP would take over. Yesterday, the House tried to unanimously pass a resolution calling on the VP to make it happen. But House Republicans blocked it, arguing an issue "of this magnitude" had to be debated. Today, Dems are taking it to a vote. The measure's expected to pass. And once it does, Pence gets 24 hours to invoke the amendment (something he's unlikely to do) or else.

The House will move forward with the impeachment process against Trump. For the second time in just over a year. While the first one relied on articles of obstruction of Congress and abuse of power, this one has a sole focus: incitement of insurrection. The charge accuses Trump of willfully making statements at a rally that encouraged "imminent lawless action at the Capitol." Including: injuring law enforcement, putting congressional members and Pence at harm, interfering with the election certification process, and carrying out other violent and destructive acts. Lawmakers also pointed to Trump's repeated claims of election fraud and his pressure on state officials to overturn the election results.

And when is this happening?

The House has it scheduled for consideration first thing tomorrow morning. They reportedly have enough support to impeach the president, since a handful of Republicans are also considering it. And under the 14th Amendment, any person "engaged in insurrection" would be banned from holding elected office in the future. The president has yet to speak out on all of this, which may be because he has lost his favorite platform.

President Trump is on track to become the first president in history to be impeached twice.

While some lawmakers are working around the clock to hold people responsible for last week's attack, officials are working just as hard to prevent it from happening again. Here's how they're taking action…

The FBI…In a memo from this week, the FBI warned law enforcement agencies nationwide of possible armed protests at all 50 state capitol buildings. They could start this weekend and go through Inauguration Day. The memo also states that an armed group may be planning to return to Washington, DC, for an uprising should Congress remove Trump from office. The info was reportedly shared with law enforcement agencies.

The National Guard...After the National Guard's delayed response to the Capitol Hill riots last week, officials don't appear to be taking any chances. The National Guard plans to have up to 15,000 of its personnel ready for President-elect Joe Biden's inauguration next week. US Army Secretary Ryan McCarthy had said DC was expecting about 6,200 Guard members last weekend. And they were to remain in the region for at least 30 days.

President Trump...Over the weekend, DC's mayor asked Trump to declare an emergency in the District. Yesterday, he did it. He's also ordered federal assistance to help reinforce the District's response efforts ahead of the inauguration.

Where the US is looking abroad…

Cuba. Yesterday, the Trump admin labeled the country a state sponsor of terrorism. In 2015, the Obama admin removed Cuba from the list in an effort to rebuild ties, ending decades of US efforts to isolate the communist island. Now, after restricting travel and bringing sanctions against the country, the Trump admin is reversing one of Obama's signature foreign policy achievements. Sec of State Mike Pompeo is accusing Cuba of harboring terrorists (like US fugitives from the '70s) and supporting Venezuelan leader Nicolás Maduro. But critics say the move is political – designed to undermine the incoming Biden admin's effort to improve ties with Havana. They also worry it could reduce credibility for the US's state sponsors of terrorism listing process, which includes only three other countries. A Biden official said the admin will decide what to do based on "national interest."

Parler. Yesterday, the conservative-favorite social media platform sued Amazon. Parler's been under scrutiny for not prohibiting hate speech or disinformation. So Amazon banned it from using its web-hosting services for violating its company rules. Unable to find another host, Parler went dark. And is now arguing the tech giant violated antitrust law, breached its contract, and interfered with its business relations with users. Amazon said there was no merit to the claims, and that Parler was clearly in "violation of our terms of service."

Twitter. Yesterday, its shares dropped over 6% as the social media company faces backlash from some lawmakers for its decision to ban @realDonaldTrump. Last week, Twitter was one of a number of companies that started banning or restricting President Trump's account or those associated with him after the deadly riots on Capitol Hill. But the move is worrying investors about what this could mean for the regulation of social networks. And Twitter's problems may only get worse. Democrats are taking over the Senate and may be more open to cracking down on Big Tech.

...Oh, and speaking of things experiencing a downfall, Bitcoin is feeling it too.

Who's top of mind in the security space…

William Burns. Yesterday, President-elect Joe Biden said he would nominate the former US ambassador as his CIA director. If confirmed, Burns – who's worked under Republican and Dem admins – would be the first career diplomat to lead the agency. After Trump clashed with the current CIA director, the hope is that having someone who's close with the next president lead the agency could restore morale.

Chad Wolf. Trump's acting Homeland Security Secretary is the latest admin official to announce he's leaving early after the Capitol siege last week. The announcement is raising concerns about security in advance of President-elect Joe Biden's inauguration – and about the challenge all these early exits could pose for the Biden transition team

Who everyone's talking about...

DeVonta Smith. Yesterday, the Heisman Trophy winner pulled off three touchdowns in the first half to help Alabama take the College Football Playoff National Championship. The 52-24 win over Ohio State came after an undefeated season with one of the best offenses in history. Roll Tide.

...Oh and speaking of football, New England Patriots coach Bill Belichick is sitting out the Presidential Medal of Freedom.

When lasting four seconds can be a good thing…