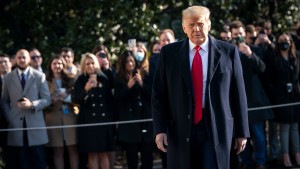 It's been exactly a week since the Capitol was under siege.

Feels much longer than that.

We know. Last Wednesday, pro-Trump supporters stormed the US Capitol, breaking into federal offices and occupying the Senate floor. Five people died, including an officer. The attack has lawmakers calling on President Donald Trump to resign. But over the course of the last few days, many developments have come to light. Including about...

The president...Yesterday, Trump made his first public remarks since the riots. He rejected responsibility for the protesters' actions and said people thought his comments urging his supporters to "fight like hell" were "totally appropriate." This, as he faces growing restrictions online, three of his Cabinet members have resigned, lawmakers have condemned his comments, and as a second impeachment is on the horizon.

The FBI...The day before rioters attacked the Capitol, FBI officials in Virginia received a report warning law enforcement about extremists traveling to Washington, DC, for "war." It also said they were reportedly calling for violence in an online thread, saying things like "be ready to fight." It's unclear how widely this was shared with law enforcement agencies, but it could raise further scrutiny against law enforcement for their handling of the riots.

Arrests...This week, a grand jury indicted three men in connection with the riots. Mark Leffingwell, of Seattle, was charged with several counts including assaults on police. Lonnie Coffman, of Alabama, was charged for possessing 11 Molotov cocktails and other weapons. And Jacob Chansley, of Arizona, was indicted for violent entry on Capitol grounds along with other offenses. Dozens more were also arrested. Meanwhile, several Capitol Police officers were suspended in connection to the riots, and about a dozen are under investigation.

Lawmakers…After sheltering in place at the Capitol last week, at least three of them tested positive for COVID-19. Reps Brad Schneider (D-IL), Pramila Jayapal (D-WA), and Bonnie Watson Coleman (D-NJ) were in the same room as Republican lawmakers accused of not wearing masks. Jayapal said it created a "superspreader event on top of a domestic terrorist attack."

A hero...While last week's riots led to a lot of negative news, a hero still rose from the ashes. The name to remember: Eugene Goodman. He's been identified as the Capitol Police officer who lured a mob of rioters away from the Senate chambers filled with lawmakers.

America is grappling with the aftermath of the deadly Capitol siege. And the possibility of additional attacks. But as our democracy is put to the test, may we all remember the people who fought to protect it.

Yesterday, the House voted 223-205 on a resolution calling on VP Mike Pence to invoke the 25th Amendment. The measure is considered to be nonbinding and was shot down prior to the vote by the vice president himself. In a letter to House Speaker Nancy Pelosi (D-CA), Pence said he didn't think it would be "in the best interest of our Nation or consistent with our Constitution." Now, the House is expected to switch to 'Plan B.'

Today, the House will move to impeach President Trump. They plan to charge him with "incitement of insurrection" for encouraging "imminent lawless action at the Capitol." It's expected to pass since Dems control the House, and have garnered some support across the aisle.

As many as 10 to 20 Republicans could reportedly vote to impeach the president. While some have been vocal about their desire to hold Trump accountable, others are just coming out of the woodwork. Among them: Rep. Liz Cheney (R-WY), the third-ranking House Republican, who believes there has "never been a greater betrayal by a President of the United States of his office and his oath to the Constitution." And Senate Majority Leader Mitch McConnell (R-KY) who's apparently pleased House Dems started the impeachment process. But has not commented on how he would vote.

What's getting a revamp...

COVID-19 vaccine distribution. Yesterday, the Trump admin announced all available doses of the coronavirus vaccine would be released in an attempt to speed up vaccination efforts. Reminder: Pfizer's and Moderna's vaccines require two doses, to be administered 21 and 28 days apart, respectively. And the gov was holding on to millions of doses for people's second round. But now it's saying 'let's give more people the first dose, ASAP.' And is pushing states to prioritize people 65 and older and those with high-risk health issues.

...Oh and speaking of major changes, international airline travelers will have to show a negative coronavirus test before boarding flights to the US starting Jan 26.

Lisa Montgomery. Last night, the Supreme Court cleared the way for her execution. Montgomery, the only woman on federal death row, was pronounced dead a few hours later. She was scheduled to be executed yesterday, but her case was held up in the courts as her lawyers argued she was too mentally ill to be put to death (see: the Eight Amendment). Montgomery is the first woman to be put to death by the fed gov in 67 years. Her attorney called the decision "far from justice."

Who's taking it back…

SCOTUS. Yesterday, it reinstated a fed requirement that women must visit a hospital, clinic, or doctor's office to pick up a pill used for medication-induced abortions. Because of the pandemic, a lower court had waived FDA rules and allowed the medication to be distributed by mail. Now, in a 6-3 decision, the Supremes sided with the Trump admin to stop mail deliveries of the pill despite coronavirus concerns. In her dissent, Justice Sonia Sotomayor (joined by Justice Elena Kagan) said the decision put an "unnecessary, unjustifiable, irrational, and undue burden" on women. This is the first abortion case to come before Justice Amy Coney Barrett.