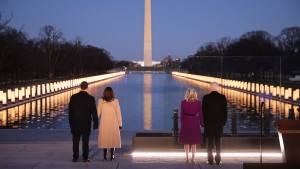 And soon-to-be President Joe Biden's already got big plans for what's to come. Now that he's about to take on his new role and some of his Cabinet nominees face confirmation hearings, the real work can begin. Here's a look at what's on his agenda for the first 100 days:

COVID-19 response...Biden plans to rejoin the World Health Organization, reversing the Trump admin's decision to ditch it last year. He also wants to pass a $1.9 trillion relief package that includes $1,400 stimulus checks for most Americans and a $400 weekly unemployment bonus. But the hefty price tag on this package could pose a problem for Biden as lawmakers have previously called out such high gov spending.

Vaccines...Biden promised to hand out 100 million coronavirus vaccine shots in his first 100 days – an ambitious but attainable goal, according to Dr. Anthony Fauci. Since December, about 11 million people have gotten at least one dose and supply is limited. The Biden admin may need to ramp up production (possibly through the Defense Authorization Act) and open up vaccine distribution sites that'll be funded by the federal gov (right now, state govs have the final say on distribution).

Immigration…He's expected to unveil legislation that would create an eight-year path to citizenship for about 11 million undocumented immigrants. If passed, it would be the largest bill to grant legal status to those in the country illegally since 1986. Biden also wants to work toward reuniting families that have been separated at the border. And is hoping to keep the dream alive for Dreamers by extending their protections after the Trump admin tried to nix the DACA program. But his plans might come across some challenges in the Senate, where Republicans have supported stronger immigration restrictions.

Climate change…He wants to organize a "climate world summit" calling on other countries to make more "ambitious national pledges" to decrease greenhouse gas emissions. And hopes to sign an executive order to plan and achieve net-zero emissions by 2050. Biden's also looking at reversing the Trump admin's rollback of several (think: over 100) environmental protections. But some of these reversals could face opposition from GOP lawmakers and the oil and gas industry.

Economy...To fund some of these big-ticket items, Biden said he would repeal part of President Trump's 2017 tax cuts that benefited some (read: wealthy) Americans while adding billions of dollars to the US's national debt. And he's promised that those making under $400,000 per household are not going to see their taxes increase. Biden also plans to initiate his "Build Back Better" economic recovery plan, it aims to create millions of jobs, invest in new tech, and improve infrastructure, among other things. Here's a look at what this could mean for your wallet.

Senate confirmations...Having his Cabinet ready is one of the first steps to make sure his legislative agendas reach the finish line. Yesterday, five of his Cabinet nominees who would head the treasury, defense, and state departments were in front of Senate panels explaining why they would be good for the job. And here's what they'll face if confirmed.

The Biden admin is practically here and ready to put forward their own policy ideas. But a lot of those plans involve hitting 'undo' on the past four years – something that may take a lot more than 100 days to achieve.

Today's presidential welcome might look scaled back compared to celebrations in the past. Because of the pandemic and security concerns, you're cordially invited to have a front-row seat to the ceremony from your couch. But there will still be plenty of pomp and circumstance for 46. Here's what to expect:

Who? The guests of honor are President-elect Joe Biden and VP-elect Kamala Harris, who's making history as the first woman, first Black person, and first South Asian American in that role. They'll be joined by future first lady Dr. Jill Biden and future second gentleman Doug Emhoff. Former Presidents Barack Obama, George W Bush, and Bill Clinton will also join the party. As well as about 1,000 guests (down from the 200,000 tickets usually offered).

What? The highlight of the whole shebang is the swearing in of Biden and Harris. And then, Biden will deliver his inaugural address, which is expected to focus on unity. The rest of the day includes things like a review of the military troops, a visit to Arlington National Cemetery to lay a wreath at the Tomb of the Unknown Soldier, and an escort to the White House.

Where? The bulk of the events are taking place in the Washington, DC, area. But you can join from anywhere. Here's where you can watch.

When? News coverage will start a few hours early. But the big event kicks off around 11:30am ET with things like the Pledge of Allegiance and the national anthem (hi, Lady Gaga). Harris will be sworn in just before noon ET by Justice Sonia Sotomayor. Then, Chief Justice John Roberts will help 46 take the oath of office. Later on, the "Celebrating America" TV event kicks off at 8:30pm ET with Tom Hanks as the host and a number of performers.

What's not happening? No inaugural balls or real parades. President Trump won't be there – the first time a president won't be there to pass the baton since 1869. And (again) no crowds, but there will be plenty of stars and stripes to represent those who were unable to attend the inauguration.

Steve Bannon. Overnight, President Trump pardoned his former chief strategist – a decision made hours before leaving office. Last summer, prosecutors charged Bannon for ripping off donors who supported the construction of the southern border wall. He pleaded not guilty and was out on bond awaiting trial. Now, Trump's move would wipe out any punishment for Bannon if he were found guilty. And provides another example of how the president has used his power to help his allies. Bannon is among the 73 pardons and 70 commutations Trump has signed off on during his last hours as president.

Sen. Mitch McConnell (R-KY). Yesterday, on his last full day as Senate majority leader, McConnell publicly blamed President Trump for the deadly mob attack at the US Capitol. He said the mob was "fed lies" and "provoked" by the president and "other powerful people." His statements break with years of standing by the president. And show deeper cracks within a Republican Party that's already divided following a contested 2020 election. The public rebuke also comes as the upper chamber anticipates an article of impeachment against Trump.

...Oh and speaking of the Capitol attack, 12 National Guard troops will no longer be reporting for inauguration duties after the FBI found that two of them had possible ties to right-wing extremist groups. The rest were removed for other reasons "out of an abundance of caution."

China. Yesterday, Sec of State Mike Pompeo officially called Beijing's treatment of Uighur Muslims "genocide." And said the country is committing crimes against humanity. It's the admin's latest move to pressure China, which has been accused of detaining more than 1 million Uighur Muslims and other ethnic minorities in forced labor camps. The US is the first country to use these terms to describe what's happening in Xinjiang. And now, the State Dept's calling on other justice systems to join the US and hold China responsible for these "atrocities." An advocacy group working for Uighurs' freedoms reportedly applauded the US's declaration. Meanwhile, China said it's "simply a lie" to disparage Beijing.

The US. Yesterday, the country topped 400,000 COVID-19 deaths – the highest death toll in the world. The grim record came nearly a year after the first recorded case in the US. Now, one analysis says the disease is killing more people each week than heart disease and cancer.

Moderna. Yesterday, it said it's investigating reports of "higher-than-usual" allergic reactions to its coronavirus vaccine. The announcement came after fewer than 10 people in San Diego, California, appeared to have suffered severe reactions to their shot. Now, California health officials are urging providers to stay away from using a specific batch of doses.

Who'll be the Super Star on the field...

Where you'll want to Gogh...