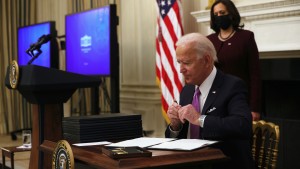 The Biden admin has launched its COVID-19 plan.

For over a year now, the coronavirus has upended American lives. Former President Trump had left the majority of pandemic relief plans up to states (think: vaccine distribution, mask mandates). But President Biden is taking a more hands-on approach that he says is "based on science, not politics." Yesterday, he introduced a 200-page long "full-scale wartime" plan. And signed 10 executive orders. Don't worry, we skimm'd them for you:

Masks…Biden signed a mask mandate – requiring them to be worn in airports and on public transportation (think: many planes, trains, ships, and intercity buses). Many airlines already had this rule. And to date, over 2,500 people have reportedly been banned for refusing to wear a mask. Biden's strategy kicks it up a notch by throwing the federal gov's support behind mask enforcement.

Testing...Biden signed an EO that establishes a board (creatively named COVID-19 Pandemic Testing Board) to oversee and improve testing at the national level. He'll also require international travelers to show proof of a negative COVID-19 test before arriving in the US.

Vaccines and PPE...Biden invoked the Defense Production Act to speed up vaccine manufacturing, testing, and personal protective equipment production. And he's pressing on with his goal to get 100 million people vaccinated within his first 100 days. But some think that's a low bar, considering the country's already on track to vaccinating 1 million Americans a day. It's also unclear how effective this EO will be considering that Pfizer and Moderna are already at max level production.

Reopening schools...Biden is expanding vaccine distribution to the unsung heroes of America: teachers. He's calling on HHS and the Education Dept to share resources with schools so they can reopen. The plan also offers schools complete refunds for PPE. And will create a national database to record things like COVID-19 cases and outbreaks in schools.

Health Equity Task Force...Biden established a task force intended to help vulnerable communities – including people of color who are disproportionately affected by COVID-19. It will aim to increase funding to community health centers and expand mental health services. While also working to research the long-term effects of the virus.

Thanks for the recap.

No problem. Don't forget about Biden's proposal for a $1.9 trillion coronavirus relief package. Part of that package also includes a $1,400 stimulus check and a $400 weekly unemployment bonus. But it's already getting some pushback from the Senate (which is tied 50-50 between Dems and Republicans). Sens. Mitt Romney (R-UT) and Lisa Murkowski (R-AK) aren't 100% on board with the hefty price tag. And Sen. Joe Manchin (D-WV) isn't too keen either, which may wreck the proposal's chances of passing.

Biden has long criticized Trump's approach to COVID-19. Now, it's up to him to show the American people his approach can turn the tide. There's no time to waste: the US could reach 500,000 deaths next month.

President Biden's Cabinet. Earlier this week, it got its first member after the Senate approved Avril Haines as director of national intelligence. The former CIA deputy director is now the first woman in history to serve as the DNI – a role that oversees 17 agencies and orgs and directly advises the president. Haines won't be the only one at the Cabinet table. Nominees for Treasury, Defense, State, Homeland Security, and Transportation secretaries are hoping to pull up their chairs. (We break down who they are here.) They've had their confirmation hearings, and some could get the stamp of approval as soon as today.

Baghdad, Iraq. Yesterday, twin suicide bombings at a busy market killed at least 32 people and injured 110 others. It's the capital's deadliest attack in three years. In 2017, Iraqi forces (backed by the US) defeated ISIS fighters. The area's thought to be safer since then. But the attack comes amid rising political and economic tensions in Iraq, reinforced by recent anti-gov protests and delayed elections. ISIS has reportedly claimed responsibility. And Iraqi security officials have been deployed to prevent any further threat.

London. Yesterday, it approved the removal of two statues with ties to slavery from its financial district. This comes after a statue of a slave trader was brought down during one of last year's Black Lives Matter protests. Now Brits are saying 'let's rep our history differently.'

When you don't have a dog waiting for you…

Put your Manet into this.