Daily Skimm: Back to the Past, COVID-19, and Nia Dennis 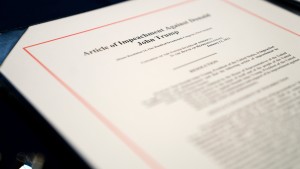 As the country moves forward with a new president, some things aren't staying in the past.

It's been less than a week since President Joe Biden took the oath of office. In that time, he's signed dozens of executive actions including on COVID-19, immigration, climate change, and the economy. But while he's got more on the docket, remnants of the Trump admin have yet to be resolved:

The election…For months, then-President Trump and his legal team tried to overturn the election results by claiming there'd been evidence of widespread voter fraud (there wasn't). But their efforts didn't stop at lawsuits (at least 60 of them), recounts, and pressuring state officials. Now, we're learning that Trump also reportedly pressured the Justice Dept to back Trump's election-related lawsuits in an effort to overturn Biden's win. And considered firing then-acting Attorney General Jeffrey Rosen to replace him with someone (hi, Jeffrey Clark) who'd help him overturn the results. After Justice Dept officials reportedly threatened to quit if Rosen got the boot, Trump apparently dropped the idea. And Clark said 'never happened.' Now, Senate Majority Leader Chuck Schumer (D-NY) is calling for an investigation, saying it was an "attempted sedition."

Impeachment…Nearly two weeks ago, the House voted to impeach Trump for "incitement of insurrection" after the Capitol siege. Today, that article of impeachment is headed to the Senate. Senators will be sworn in as jurors tomorrow, and the trial is expected to start the week of Feb 8. A two-thirds majority will be needed to convict the former president (think: at least 17 Republican senators need to join all 50 Dems). But some aren't convinced Trump's speech met the criteria for "incitement." Others are questioning whether it's constitutional since Trump is already out of office. Meanwhile, Biden's admin is trying to get its Cabinet ready and confirmed before the trial.

It's going. Last week, the Senate confirmed two Cabinet members: Avril Haines as director of national intelligence and former US Army four-star General Lloyd Austin as secretary of defense. Austin is the first Black Pentagon chief and he's hit the ground running. For his first directive, he's given military leadership two weeks to hand over a review of their sexual assault prevention programs. Important, since an estimated 20,000 military women experienced "unwanted sexual contact" in 2018. Two of Biden's other Cabinet picks (for Energy and Veterans Affairs) have their confirmation hearings this week.

As the US's new president onboards his Cabinet to tackle the issues the country's facing, the former president's last days are still top of mind. And the Senate appears to be caught in the middle

What's got people on high alert...

COVID-19. Last week, UK Prime Minister Boris Johnson said B117 (a coronavirus variant first found there) may be more deadly than previously thought. According to the CDC, at least 200 cases of this strain have been identified in the US. Speaking of the virus, it has reportedly reached every county in America. Over the weekend, the US hit over 25 million reported cases and hospitals are running out of space – over 40% of Americans live in areas with limited ICU capacity.

Russia. Over the weekend, more than 15,000 people took to the streets nationwide to support opposition leader Alexei Navalny. Last week, police arrested Navalny upon his return to Russia (after being poisoned in August). Russian officials said Navalny violated a 2014 jail sentence for embezzlement. But Navalny claims the charges were made up and called on people to take to the streets. On Saturday, they followed through – an estimated 15,000 people out in Moscow alone and more than 3,000 were reportedly arrested across dozens of cities. The US condemned the arrests. Russia reportedly downplayed them. But demonstrators plan to return to the streets until Navalny is released.

Larry King. Over the weekend, the longtime CNN host died at age 87. The cause of his death was not clear but he was hospitalized for COVID-19 last month. King was best known for hosting "Larry King Live" for over two decades before retiring in 2010. He's interviewed tens of thousands of people including presidents, celebrities, athletes, and more. Before that, he started his media career as a DJ and was on local radio. King battled several health problems and lost two of his children last year. CNN founder Ted Turner called King the "world's greatest broadcast journalist of all time." RIP.

Hank Aaron. Last week, the Baseball Hall of Fame legend died at age 86. He played for the Milwaukee and Atlanta Braves for decades and was known for beating Babe Ruth's home run record in 1974. Aaron ended his career with 755 home runs. During his time in the league, Aaron found success despite facing poverty, segregation, and racist threats. And spoke out about the hardships the Black community faces. Georgia's Gov. Brian Kemp (R) called Aaron an "American icon" and commended his work to "advance civil rights and create a more equal, just society." RIP.

Why you may want to open up all of your mail…

It could be worth $600. Some Americans have started to receive their stimulus payment a little differently this time: a prepaid debit card. And it will likely come in an envelope from the Treasury Dept. So don't throw it out.

Psst…we Skimm'd some smart ways to spend your stimulus money.

Who's hoping to kiss the Vince Lombardi Trophy…

The Tampa Bay Buccaneers and the Kansas City Chiefs.

Who's bringing her A game...