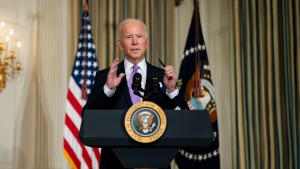 Since day one in office, Biden has signed dozens of executive actions ranging from immigration to climate change to the economy. Now, following last year's racial reckoning, Biden cited the George Floyd protests as a driving force behind the need for change. And took pen to paper on four executive actions aimed at tackling discriminatory housing, prison reform, and more. Here's what each action involves:

Housing...The president has directed the Department of Housing and Urban Development to make sure the Fair Housing Act is being fully enforced. And to look into how previous admins may have chipped away at it. Think: like when the Trump admin repealed an Obama-era rule that sought to minimize housing discrimination.

Prisons...Biden signed an executive order calling on the Justice Dept to not renew contracts with private prisons. He said this move would stop companies from profiting off of those incarcerated, with hopes to decrease incarcerations. The Obama admin announced similar plans in 2016, but the Trump admin quickly reversed the decision. Note: Biden's EO doesn't apply to ICE detention centers. On the campaign trail, the now-president vowed to end the gov's use of private facilities for any type of detention – including detaining immigrants (like ICE), which makes up a significant portion of private prisons and rakes in billions of dollars a year.

Tribal sovereignty and xenophobia…Biden also issued a memo encouraging federal agencies to develop a closer relationship with tribal govs through "regular, meaningful, and robust consultation." And urged them to work with these communities to form federal policy. Separately, the president also spoke against the anti-Asian sentiment that saw a rise amid the coronavirus pandemic. And called on the HHS sec to help improve things like language access and cultural awareness toward Asian Americans and Pacific Islanders.

Biden's often been criticized for several crime bills he supported as a senator in the '80s and '90s – some of which led to the mass incarceration of Black Americans. And although he seems to want to make strides in prison reform, the executive actions stopped short of addressing things like police reform and means to make law enforcement accountable. Especially since he's had a strong relationship with police unions in the past.

After a year of racial reckoning, Biden is pushing through executive actions he hopes will help the country heal and ease divisions. But dismantling systemic racism will take work, and only time will tell if the Biden admin is ready to tackle it head-on.

Russia and the US. Yesterday, President Biden had his first phone call with Russian President Vladimir Putin. And discussed having their teams work on a five-year extension of their last remaining major nuclear weapons agreement. In 2011, the New Strategic Arms Reduction Treaty (START) went into effect, setting a limit to the number of deployed nuclear weapons and missiles for each country. And it allowed for on-site inspections to make sure the rules were followed. The Trump admin and the Kremlin struggled to reach a compromise in order to extend the agreement – which is set to expire in less than two weeks.

...Oh and speaking of the Biden admin, it's also restarting US relationships with Palestinians, renewing humanitarian aid and support for a two-state solution between Palestinians and Israel.

Who's trying to plant seeds of change...

Indian farmers. Roughly two-thirds of Indians work in agriculture. And yesterday, tens of thousands of them protested in New Delhi against agriculture laws. Last year, parliament passed three pieces of farm legislation aimed at revamping the sector by allowing private companies to buy produce directly from farmers. But farmers, who've been protesting for months, say these laws will only hurt them (think: big corporations taking over small farms). Yesterday, they led one of the country's largest reported protests, using a national holiday and taking over the historic Red Fort to show their anger. They were met with tear gas and water cannons. At least one farmer reportedly died and dozens of police were injured.

Texas. Yesterday, a federal judge there temporarily blocked President Biden's 100-day pause on deportations. In one of his first orders of business, Biden ordered ICE to halt deportations of people who arrived in the US before Nov 1. But Texas AG Ken Paxton (remember him?) challenged it, arguing that it posed harm to the Lone Star State. And a judge agreed, saying it violated the agreement in place before Biden took office. Paxton celebrated it as a "victory." But a lawyer with the ACLU said the halt in deportations was necessary to prevent family separations and for people not to be "returned to danger needlessly."

...Oh and speaking of immigration, the Biden admin has officially revoked the Trump-era "zero tolerance" policy – which separated over 5,500 migrant children from their parents at the border.

Who's busier than ever...

Vaccine makers. Yesterday, President Biden said the gov's in the market to buy more COVID-19 vaccine doses – 200 million more to be exact. To be split equally by Pfizer-BioNTech and Moderna. If successful, Biden said it would be enough to vaccinate almost the entire US population by the end of the summer. And in the short-term, the admin said it would take steps to increase state vaccine doses by about 20% (think: 10 million doses per week) for the next three weeks.

Who's coming up roses…

Rosalind Brewer. The Starbucks COO is poised to become the only Black woman currently leading a Fortune 500 company when she starts her new role as CEO of Walgreens in March.