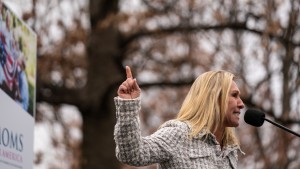 The Splintering of the Republican Party

The Republican Party is fracturing.

Throughout former President Trump's term, most Republican lawmakers stood by him – come hell or high water. They supported his baseless claims of election fraud and voted to block the certification of the election results. After Trump was impeached in the House for "incitement of insurrection" for his role in the deadly Capitol siege, nearly all 50 Republican senators voted against holding an impeachment trial. But cracks in the GOP are starting to show. Tens of thousands of registered Republicans have reportedly switched parties. And dozens of former officials from the Bush admin are reportedly saying 'we're done.' And someone else seems to be deepening those cracks.

Rep. Marjorie Taylor Greene (R-GA). The newly elected representative from Georgia's 14th Congressional District has been getting a lot of attention – and not for the right reasons. Greene is a known QAnon supporter (a far-right conspiracy theory group) and believes Trump won the election. She also has a history of racist, inflammatory, and false statements. She's suggested Muslims don't belong in the government. And that the Sandy Hook and Parkland shootings were staged – even harassing one of the survivors. She's claimed that the deadly 2018 California wildfires were started by space lasers controlled by a Jewish banking family. And recently, it's come out that she has reportedly 'liked' several social media posts calling for FBI agents and prominent Dems to be killed.

House Speaker Nancy Pelosi (D-CA) condemned House Republican leaders for sweeping Greene's actions under the rug and, instead, appointing her to the House Education Committee. Senate Minority Leader Mitch McConnell (R-KY) called Greene's beliefs a "cancer" for the Republican Party. And Sen. Rob Portman (R-OH) called on his party's leaders to "stand up" against her. Yesterday, a group of House Dems planned to do just that – they are looking to remove Greene from multiple House committees (Education and Labor, and Budget). Others are calling for her to be expelled or censured.

What is she saying?

So far, Greene has not shown remorse for her past comments. The congresswoman tweeted that she will "never apologize." And said the "real cancer" for the GOP is "weak Republicans who only know how to lose gracefully."

Republicans are not only dealing with a loss of power in Congress, but widening divisions in their party. Now, many eyes are on the GOP to see how it repairs the fractures...or not.

What'll be coming to a store shelf near you…

This over-the-counter COVID-19 test. Yesterday, the Biden admin announced a nearly $232 million deal to ramp up at-home coronavirus testing. In December, the FDA granted emergency use authorization to tests developed by Ellume – an Australian company. They provide results in 15 minutes and have shown to be about 95% accurate. Now, the White House is saying 'take our money.' Between now and July, Ellume's expected to send 100,000 tests to the US. And it'll build its own manufacturing plant in the US – which would increase the company's global production by at least 500,000 tests per day.

Myanmar. Several countries (Japan, the EU, and the US) and the UN are demanding the country return to democratic rule. Earlier this week, the military staged a coup, arresting Aung San Suu Kyi (the country's civilian leader) and several others. Military officials cited alleged fraud in the country's recent election, and said it will maintain control until new elections are held next year. The whereabouts of the arrested leaders are reportedly unknown. And internet and phone line disruptions have affected access to info on what's going on inside the country. The US has threatened to reimpose sanctions if order isn't restored.

Who's refusing to be silenced…

Rep. Alexandria Ocasio-Cortez (D-NY). Yesterday, she chronicled her experience of the January 6th attack on the Capitol during a nearly 90-minute Instagram Live video. She said she hid in a bathroom while a man shouted “where is she.” She described seeing a Capitol Police officer and not knowing if he was there to protect or harm her. And said that like for “so many other communities in this country” the presence of police doesn’t necessarily signal safety. She also came forward as a sexual assault survivor. And said that those who are telling her and others to move on from that day are using the tactics of abusers.

Dustin Diamond. Yesterday, the actor who played Screech for nearly 13 years on "Saved by the Bell" died at age 44 from cancer. His death came three weeks after his Stage 4 diagnosis. His former "Saved by the Bell" costars paid tribute on social media, with Mark-Paul Gosselaar sharing he'd miss Diamond's "brilliant sparks." RIP.

Who could be feeling peachy...