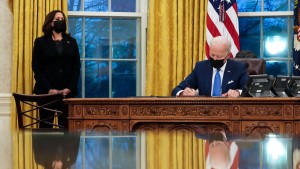 President Biden has once again pulled out the red pen.

Immigration reform. Yesterday, Biden signed three executive orders – taking steps to roll back former President Trump's immigration policies. As part of his campaign promises, these EOs add to the series of actions on immigration Biden has put in motion since Day 1. Here's what you need to know:

Family reunification…The Biden admin is creating a task force to help reunite families separated at the US-Mexico border. Reminder: Over 5,500 migrant children were taken from their parents under the Trump admin's controversial "zero tolerance" policy. About 1,000 of them have still not been reunited with their families. This new task force will work to fix that and help prevent it from ever happening again. But it faces an uphill battle: many parents have been deported without their kids, and there is no record of where they've gone.

Seeking asylum…Biden has tasked his admin to review asylum protocols, including former President Trump's "Remain in Mexico" policy. It required asylum seekers (more than 60,000) to stay in Mexico while their claims went through the courts, limiting their access to legal counsel. A full review will help decide whether to end or revise the program. And Biden has asked the Supreme Court to cancel hearings on the topic in the meantime. The admin will also revive an Obama-era program that allowed at-risk children to join family members in the US.

Policy review…Biden wants gov agencies to review several of the Trump admin's immigration policies. Including the "public charge rule" which allowed the US gov to deny green cards to immigrants who relied on (or were likely to rely on) housing assistance, food assistance or Medicaid, among other programs.

What people are saying?

During his term, President Trump enacted over 400 policies on immigration – an issue that was at the forefront of his first campaign. And while Biden's promised to roll them back, he's likely to face pushback from Republicans. Case in point: A fed judge already halted Biden's freeze on some deportations. So, the Biden admin's urging patience, adding that it "will take time and require a full-governance approach."

The Biden admin has put immigration at the top of its list in the hopes of creating real reform. But such a feat will take time – a resource many can't afford to lose.

Alexei Navalny's. Yesterday, a Russian court sentenced the opposition leader to more than two years in prison. Reminder: Last month, Navalny returned to Russia after being poisoned. Authorities immediately arrested him for violating a 2014 sentence from an embezzlement case. The country erupted into protests calling for his release. But now, a Russian court's ordering him to remain behind bars. The verdict sparked global condemnation, with the US calling for Navalny to be released "immediately and unconditionally." Several countries (like Poland, Lithuania, and Latvia) are urging the EU to impose sanctions on Russia. And Navalny issued his own rebuke, telling the Kremlin that "hundreds of thousands cannot be locked up." Navalny's lawyers said they will appeal the decision

Who's got the green light...

Alejandro Mayorkas and Pete Buttigieg. Yesterday, the Senate confirmed the duo to President Biden's Cabinet. Mayorkas is the first Latino and first immigrant to lead the Homeland Security Dept. He'll be tasked with rolling back Trump-era immigration policies (like the ones we mentioned above), and handling the response to the pandemic and national security threats. Meanwhile, Buttigieg will serve as the nation's transportation sec. He's the first openly gay Cabinet member to be confirmed by the Senate in US history. And is expected to hit the ground running on much-needed infrastructure updates (think: repairs for roads and bridges).

...Oh, and Antony Blinken got a new job too. Last week, he got approval to serve as the 71st secretary of state. He'll be tasked with putting President Biden's plans (think: on climate change and refugee resettlement) into action.

Who's out for delivery...

Jeff Bezos. Yesterday, the Amazon founder said he'll be stepping down as CEO. And will add to his cart the title of executive chairman of the board later this year. For nearly 30 years, Bezos has run Amazon, scaling it to the online retail giant it is today. Now, he hopes to take Amazon to new heights with "new products and early initiatives" and will focus on reaching for Blue (Origin) skies. His replacement, Andy Jassy, will get to upgrade his Prime membership – from cloud exec to CEO.

Where there are coronavirus updates…

The US. Yesterday, the Biden admin announced that 1 million COVID-19 vaccine doses will be shipped directly to about 6,500 pharmacies starting next week. The plan aims to address equity concerns and a slow vaccination rollout. And vaccine shipments will eventually expand to 40,000 pharmacies, including CVS, Rite Aid, and Walgreens. The announcement came as the number of COVID-19 vaccinations in the US surpassed the total number of confirmed cases.

The UK. Researchers there have found that the Oxford-AstraZeneca coronavirus vaccine significantly slows the transmission of the virus. In a new study, early data revealed that the vaccine may cut the spread of the virus by as much as 67%. It's the first time a COVID-19 vaccine has shown to reduce transmission. Researchers also found that a single dose of the Oxford-AstraZeneca vaccine was 76% effective at preventing the virus for three months. The positive results come as the UK deals with a spreading coronavirus variant

Who's gone but not forgotten…

Capt Sir Tom Moore. Yesterday, the 100-year-old WWII vet died after testing positive for the coronavirus. He became an unlikely icon after raising around $45 million for Britain's National Health Service by walking laps around his garden. Queen Elizabeth II, who knighted Moore in July, sent her condolences to the family. And Prime Minister Boris Johnson recognized him as "a beacon of hope for the world." RIP.

Who's giving us a lesson in history…