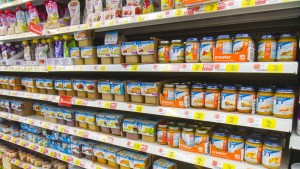 There are high levels of toxic heavy metals in some popular baby foods.

Yesterday, a congressional report revealed "significant levels" of metals like lead, arsenic, cadmium, and mercury in trusted baby food brands (think: Gerber, Beech-Nut, HappyBABY, and Earth's Best Organic). Concerning, since all of these metals are listed on the World Health Organization's top 10 chemicals of public health concern. Investigators said that companies knew what they were doing, often selling foods that surpassed current regulations. And cited that some baby food and their ingredients contained up to five times the mercury level allowed in bottled water. Exposure to these metals can have dangerous effects.

These metals have been tied to chronic disease and cancer. But exposure to toxic chemicals makes a baby's or child's developing brain especially vulnerable. Health officials say exposure can cause brain damage and can lead to a lower IQ, problems in school, and even criminal behavior later in life. The FDA noted that the toxic elements enter the food supply from natural sources: the soil, water, and air. So, it can be hard to completely avoid them. Pesticides used in farming can further increase exposure, but even organic products weren't off the hook.

Currently, the FDA doesn't have limits for heavy metals in most baby foods (except for infant rice cereal). And companies don't provide warnings to parents on their labels. On top of that, three other baby food brands (Sprout Organic Foods, Parent's Choice, and Plum Organics) refused to cooperate in the investigation – leaving investigators "greatly concerned" they had something to hide. The FDA says it's reviewing the findings and taking it "seriously." Now, investigators are calling on the agency to require manufacturers to test finished products, report the findings, and phase out the ones that contain high levels of heavy metals.

So, what can parents do?

Experts say parents can minimize the risk by avoiding rice cereal or products made with rice flour. Including the popular healthy-sounding puff snacks – which can be rice-based. And the same goes for sweet potato products. That's because these crops can absorb more pollutants during growth. Experts also recommend swapping them for unprocessed fruits and veggies, and to add in a variety of grains.

There's a lack of transparency between the food industry and its consumers. And a failure by the FDA to keep companies in check. Now, parents are left with serious doubts on how to ensure their children are safe and healthy.

Where the US is making changes…

Yemen. Yesterday, the Biden admin announced it will no longer support Saudi-backed offensive operations in Yemen. In 2015, a civil war broke out between the Iranian-backed Houthis and Saudi-backed forces. And the US began to quietly help Saudi Arabia (an ally) in the fight by providing intelligence support and billions of dollars worth of weapons. But the war has led to thousands of civilian deaths, and a humanitarian crisis that's got Yemen on the verge of famine. Lawmakers from both sides of the aisle pushed for the US gov to end its support of Saudi Arabia – especially after the murder of Jamal Khashoggi. But former President Trump vetoed the effort. Now, President Biden's saying "this war has to end," and has fulfilled a campaign promise to cut off US support. But that the US will continue to have Saudi Arabia's back in the event of an attack. Saudi Arabia said 'thanks for that,' reportedly endorsing a "comprehensive political solution" to the crisis in Yemen.

Who lawmakers have been focusing on…

Rep. Marjorie Taylor Greene (R-GA). Yesterday, the House booted Greene from two committee assignments. Democrats had pushed GOP leadership to remove her from the House Education and Labor and House Budget Committees, citing her history of racist, inflammatory, and false statements. But when the GOP didn't hop to it, Dems took matters into their own hands by scheduling a vote. Ahead of the vote, Greene said her comments "were words of the past." But all House Democrats and 11 Republicans voted to remove her. House Majority Leader Steny Hoyer (D-MD) said the move was a "moral responsibility." But some Republicans think that even if Greene was in the wrong, it should be up to party leadership (not Dems) to determine committee assignments.

Rep. Liz Cheney (R-WY). Earlier this week, House Republicans said she could keep her leadership role in the lower chamber. Cheney, the third-highest-ranking House Republican, came under fire last month for being one of 10 House Republicans to vote to impeach former President Trump. But many Republicans rallied behind her, voting 145-61 to keep her as Republican conference chair. After the vote, Cheney said it was important the GOP remain united against "really dangerous" Dem policies.

What's on a positive trend…

Coronavirus cases. Earlier this week, the CDC said cases in the US have dropped by nearly 14% since early January. But that doesn't mean you should let your guard down...especially on Super Bowl Sunday. The CDC's urging people to not tailgate indoors, and take measures to stay in the safety huddle.

PS: On this week's episode of "Skimm This," The Athletic's Rhiannon Walker explains how the NFL plans to keep its players, coaches, and fans safe. Plus, what this means for future sporting events (read: Tokyo Olympics) taking place this year.

What's serving up more than burgers and frites...