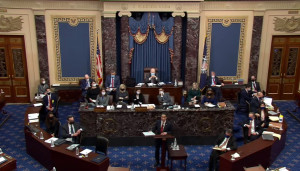 I didn't watch it.

We get it, it's hard to C-SPAN and Zoom. Last month, the House voted 232-197 to impeach Trump – charging him with "incitement of insurrection" following the Capitol attack that left five people dead, roughly 140 officers injured, and our democracy wounded. Now, the Senate's taking over. On the first day, senators voted on (and approved) the rules of the trial. Then, they spent hours debating whether it's constitutional to hold an impeachment trial for a president who's no longer in office – hearing arguments from both sides:

On the other side...The former president's legal team argued it would set a bad precedent for future officials. And said that Dems have turned the Capitol attack into a partisan issue so that they don't have to face Trump "in the future." They claimed that a trial isn't necessary because Trump's comments ahead of the riots are "free and robust political speech." And argued that the impeachment article should be dismissed because it's a Senate trial of a now private citizen.

Memorable moments...Democratic impeachment managers opened their case with a 13-minute video montage that intertwined graphic scenes of the Capitol attack, Trump's comments, and lawmakers fleeing to safety. It gave senators a stark reminder of the chaos that took place just last month in the same chamber.

Six Republican senators (including one who changed his vote) sided with all 50 Dems in saying 'yep, we're good' to continue with the trial. Many Republicans were displeased with the Trump legal team's opening remarks – Sen. Bill Cassidy (R-LA) called it "disorganized" and "random." Some Democrats reportedly showed their emotion, shaking their head as Trump is heard saying "we love you" to protesters in a video or simply being unable to look as they relived the violence of Jan 6 on-screen. As for Trump, he apparently wasn't too happy with his defense team. But his lawyers say an acquittal is still on the table. And despite the criticism, his team believes they "had a good day."

Today, the 100 senators will continue to hear arguments from both sides (each side has up to 16 hours to argue their case over the next two days). A two-thirds majority (think: 67 votes) is needed to convict Trump. If convicted, the Senate can hold a separate vote to bar the former president from ever holding office again – a move that's unlikely to happen.

Many lawmakers are looking to hold former President Trump accountable for the deadly Capitol attack. For Dems, a conviction could mark a formal public rebuke of Trump. One that they attempted to get just 371 days ago. And for Republicans, a not guilty verdict may create a moment of clarity for the party as it fractures internally.

What's pulled out the microscope…

The World Health Organization. Yesterday, a group of WHO investigators said it is "extremely unlikely" that the coronavirus leaked from a lab. And that the virus "most likely" originated in animals before spreading to humans through an intermediary host. The update came about four weeks after researchers began their mission to uncover the deadly origin of the coronavirus. Now, they've largely debunked a theory that made the rounds (including in political spheres). And Chinese officials are reportedly saying 'are we done here?'

Attacks on Asian Americans. Since the start of the pandemic, xenophobia toward people of Asian descent has been reported nationwide. Now, recent cases are showing that Asian Americans continue to be under attack, especially in California's Bay Area. Last month, an 84-year-old man from Thailand was killed in San Francisco. Shortly after, three others were attacked on the same day in Oakland's Chinatown area. Officials are investigating whether these incidents were racially motivated. And the California county DA announced the creation of a special response unit amid the rise in attacks. Former President Trump's rhetoric on the pandemic has also, in part, been linked to the violence in the last year.

While cats are sprouting up on Zoom...