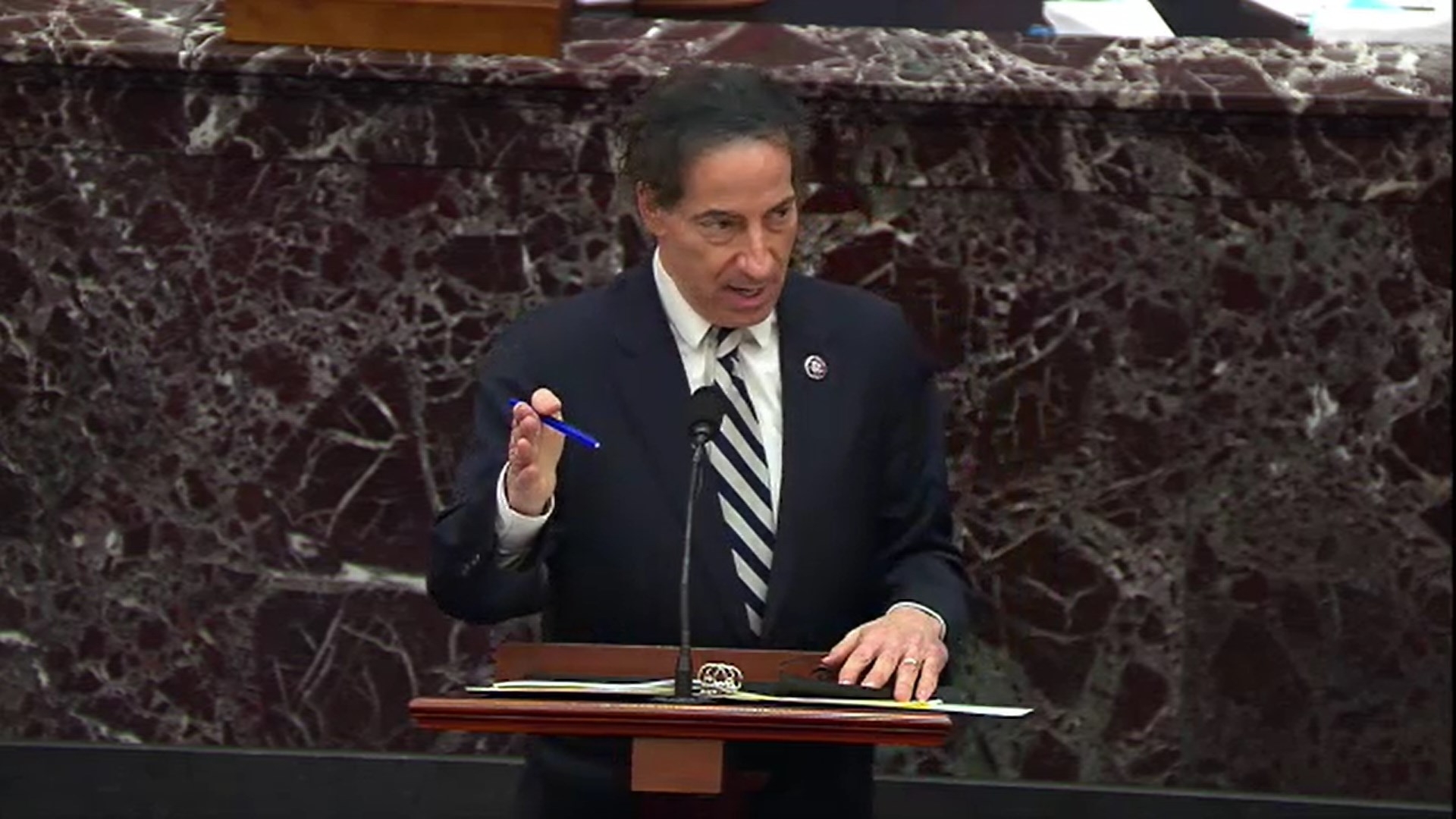 House Democrats wrapped up their case against former President Trump.

Yesterday, House impeachment managers tried to seal their message: that Trump incited the Jan 6 Capitol siege. They showed videos of rioters saying things like "we're fighting for Trump." And argued that the former president was "not a man who showed remorse," pointing to his speech telling rioters: "We love you. You're very special." Lead impeachment manager Rep. Jamie Raskin (D-MD) told senators that if Trump's ever elected into office again and there's another attack, "we'll have no one to blame but ourselves." Meanwhile, Republican senators appeared unmoved by the arguments. And several GOP lawmakers were reportedly in and out of the chamber throughout the day.

Trump's defense team is up. Today, they're expected to argue that Trump's comments are protected by the First Amendment. His lawyers could claim (once again) that the whole trial is unconstitutional because Trump's OOO. And they could do it all in one day. Meaning, Trump could be acquitted as soon as tomorrow. It's a decision that could have larger implications.

The Republican Party's fracturing. Dozens of former GOP officials are reportedly fed up with Trump's rhetoric and Republican lawmakers' refusal to stand up to him. Now, over 120 GOP officials including former Reagan and both Bush admin officials are reportedly working to form a third party. And to prioritize "principled conservatism" that would aim to endorse center-right politicians and leave Trump's politics behind.

President Trump's second impeachment trial has highlighted the trauma from the Capitol attack that's still fresh for many people. But despite that, many lawmakers appear to be leaving the door open for Trump to make a return to the political sphere.

Earlier this week, we wrote about the pandemic's effects on the state of women and mothers in the workforce. And how it disproportionately impacted women of color.

We spoke with Vice President Kamala Harris on this week's episode of "Skimm This" about how the Biden administration plans to tackle what it sees as a "national emergency."

Q: This year, women in particular are in a financial, social, and career crisis – that's being called a "shecession." What are you and President Biden doing to get women back to work?

A: When you lift up the economic status of women, you lift up the economic status of families and communities and all of society benefits. So that's how the president and I look at what we need to do around women in the workforce. One, it's a matter of equity and fairness. Two, it's a matter of how everyone as a society will benefit, how the economy as a whole will be better when women are in the workforce, when they are paid equal pay for equal work. And when they have the benefits that all working people should have such as paid sick leave and family leave.

PS: Want to learn more about how women are faring in this economy? We're going deep on all things "shecession" in today's Skimm Money newsletter. Sign up now to get it in your inbox.

What had a first date with the stock market…

Bumble. Yesterday, the dating app had its buzzy public debut. Many swiped right, with its shares opening at $76 bringing the company valuation to $14 billion. In 2014, Whitney Wolfe Herd left Tinder to create Bumble, giving women the power to make the first move. Now, the app's got more than 12 million monthly active users. And at age 31, Wolfe Herd is the youngest female founder and CEO to take a company public. Wolfe Herd thanked "the pioneering women who paved the way for us in the business world."

...Oh and speaking of dates, time to make one with your taxes. Filing season is here.

Who's saying 'sucks to get Sussexed'...

Meghan Markle. Yesterday, a UK judge ruled in her favor against the Mail and its parent company Associated Newspapers. In 2019, Markle sued the British tabloid for publishing excerpts of a private letter to her estranged father. Over the course of her relationship with Prince Harry, Markle has been the target of ruthless and racist coverage. Now, a judge said the newspaper's move was "unlawful" because it interfered with Markle's "reasonable expectation" that the letter was private. Markle commended the decision, saying "we all deserve justice and truth."

Who's come under scrutiny…

Yoshiro Mori. Today, he resigned as the president of the Tokyo Olympic organizing committee. The move came after Mori made sexist comments, saying women talk too much in meetings and have a "strong sense of rivalry." His remarks sparked international backlash as people called for his resignation, hundreds of Olympic volunteers quit in protest, and corporate sponsors began to speak out. Now, Mori's stepped down and apologized for all the "trouble" he's caused. It's not clear who'll take over Mori's role to oversee planning for the Olympics this summer.

Chris Harrison. "The Bachelor" host's been getting pushback for defending contestant Rachael Kirkconnell – who attended an antebellum plantation-themed formal in 2018. After pictures surfaced of the party, Harrison spoke out against cancel culture and dismissed the photos as old news. Critics are accusing him of defending racist behavior. Especially as it comes during the franchise's first-ever season with a Black male lead. Harrison has apologized, saying "I will always own a mistake when I make one." And yesterday, Kirkconnell broke her silence on the matter, writing "I was ignorant, but my ignorance was racist."

Who helped start a conversation...