Daily Skimm: Qatar, US Airstrikes in Syria, and the Return of the Rugrats 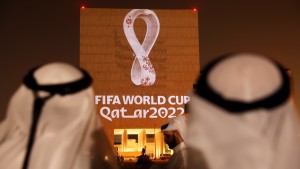 Thousands of migrants have reportedly died while preparing for the World Cup.

The soccer tournament is one of the most popular sporting events in the world (think: over 3.5 billion people watched in 2018). And next year, the event's set to take place in Qatar. In 2010, the country won a bid to host the event – but it wasn't without controversy: FIFA was accused of taking bribes to make it happen. Qatar then began investing over $200 billion for things like new infrastructure and stadiums. And called for backup from migrant workers to help with the construction.

Over the last 10 years, migrant workers from countries like Bangladesh, Pakistan, India, and Nepal have traveled to Qatar. They've helped construct dozens of projects like a new airport, roads, hotels, and even a new city to host the World Cup final. Human rights orgs say migrant workers see the opportunity as a chance to work and provide money for their families back home. But according to a report from The Guardian, things have gone very wrong.

Over 6,500 migrant workers have reportedly died of things like dehydration and heat exhaustion while working toward the 2022 World Cup. Migrant workers make up over 90% of the workforce in Qatar. And there have been reports of employers mistreating migrants when they arrive: housing them in dirty and unsafe conditions, underpaying them, and confiscating their passports. The UN has found that migrants have worked under "extreme" heat stress. The number of true deaths could be higher since countries like the Philippines and Kenya haven't shared death tolls.

It's hard to believe.

Believe it. Qatar authorities have said they protect their workers from the heat by limiting working hours between June and August. But migrant workers have reportedly said that's not always the case, and that employers have refused to provide them with proper documentation to get medical help. In 2019, Human Rights Watch called for an investigation into Qatar's treatment of its migrant workers but has said it's seen little progress. As for FIFA, it said it has a "zero-tolerance policy to any form of discrimination and to wage abuse," and has reportedly said that Qatar's trying to improve conditions. But human rights orgs are saying 'no, not really.' FIFA's still holding the World Cup there next year.

For many in both the developed and developing world, the World Cup is an opportunity to escape, cheer on their favorite soccer teams, and gather with family. But that joy appears to be coming at a deadly cost, and pressure is mounting on FIFA to ensure it never happens again.

What's got the world's attention…

The US. Yesterday, President Biden ordered an airstrike in eastern Syria. Since last week, three attacks in Iraq have injured five Americans, including a US service member. The Biden admin had warned it would respond when it was ready, and now it has. The Pentagon said the airstrike hit facilities used by Iranian-backed militant groups – which the White House blames for the recent attacks – to move and store weapons. And that it consulted with its coalition partners before carrying out the attack. The airstrike wasn't meant to escalate tensions with Iran, but to show "President Biden will act to protect American and Coalition personnel." But a spokesman for Iran's Foreign Ministry reportedly denied having any ties to the attacks against American forces and "strongly condemned" the US for trying to hold them responsible. The airstrike reportedly killed at least one militant member and injured several others. This is the Biden admin's first known military action.

John Geddert. Yesterday, the former US Olympic gymnastics coach died by suicide after he was charged with two dozen crimes. Geddert was due to turn himself in for charges including sexual assault, human trafficking, and lying to police. He'd served as the head coach of the 2012 US women's Olympic gymnastics team and worked closely with disgraced doctor Larry Nassar. Geddert's recent charges stemmed from Nassar's case, with prosecutors saying he turned a blind eye to Nassar's abuse. He was also accused of sexually assaulting a child under the age of 16. And faced 20 counts of human trafficking by using "force, fraud, and coercion" against the athletes for his financial benefit, like making them perform when they were injured and subjecting them to physical and emotional abuse. Michigan's AG said this is "a tragic end to a tragic story."

Where some health experts are worried...

New York City. This week, two research teams published early studies revealing that a new coronavirus variant (B1526) is spreading all over the Big Apple (and parts of the Northeast). While variants aren't typically cause for concern, some health experts are ringing the alarm on B1526. The reason: it can contain at least two different mutations and can reduce the efficacy of vaccines and antibody treatments. But some health experts criticized the studies, saying they weren't peer-reviewed and caused unnecessary panic. In the meantime, researchers will keep tabs on the variant.

Jennifer Granholm. Yesterday, the former Michigan governor got the Senate's green light to serve as the Biden admin's energy sec. Her track record on jobs and clean energy in Michigan earned her some big fans in the upper chamber. And she reminded lawmakers that clean energy can create jobs. Granholm said she's ready to "get to work.