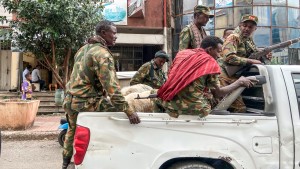 There may have been crimes against humanity in Ethiopia's Tigray region.

In November, Ethiopian Prime Minister Abiy Ahmed claimed that the regional ruling party – the Tigray People's Liberation Front (TPLF) – attacked a military base and tried to steal equipment (think: weapons and artillery). So he launched a military operation in the country's northern Tigray region – reportedly with the help of soldiers from neighboring Eritrea. Thousands of people are believed to have been killed. UNICEF said the conflict's displaced at least 280,000 people. Now, two reports – one from The Associated Press and one from Amnesty International – are shining a light on the alleged war crimes that have taken place in the region.

They accuse Eritrean soldiers of killing hundreds of unarmed civilians – including going door to door, searching and killing men and boys in the holy city of Axum. Amnesty International spoke to dozens of survivors and witnesses, and found new mass burial sites using satellite imagery. The human rights org said the atrocity is "among the worst documented so far" in the conflict. And the AP has reported that survivors face starvation as crops were burned and shops and homes looted during the conflict. And humanitarian officials have reportedly said they feared "hundreds of thousands might starve to death" if people in Tigray don't get help.

The US called on Ethiopia to pull its troops from the region, saying it's "gravely concerned" by the reports. But Ethiopia reportedly claimed Amnesty International used "scanty information." And Eritrea said its report was made up of "outrageous lies." Ethiopia has apparently tried to keep journalists far away from the region, which seems to have made it harder for officials to understand the full scope of the alleged massacre.

After months of conflict, the world is finally getting a glimpse of what may have happened in the Tigray region. And how it may have amounted to war crimes. Here's how you can help.

What's a hot topic of debate...

The minimum wage. For weeks, members of Congress have been debating President Biden's $1.9 trillion COVID-19 relief package and all it entails. Especially a $15/hr minimum wage provision that would bump up nearly 2 million Americans' paychecks (note: it's been $7.25/hour since 2009, despite rising inflation). But a nonpartisan report found that the move could cost over 1 million jobs. Over the weekend, the Democratic-controlled House passed the bill (and the minimum wage hike). But some Republican senators aren't for it – they think a gradual increase to $10/hr would help address inflation and wouldn't cost as many jobs. Now Dems are exploring other options for the wage hike.

Where people are calling for justice...

Hong Kong. Yesterday, hundreds of people gathered outside a Hong Kong court for one of the largest protests in months. Reminder: Last summer, China passed a national security law, which allowed police to crack down on Hong Kong's pro-democracy protests. And in January, authorities arrested dozens of pro-democracy activists – claiming they'd tried to overthrow the gov by holding unofficial primaries. Now, 47 people – including some of the city's most prominent activists – have been charged with violating the law, and could face life in prison. And could also remain in jail for months until their trials begin. The US and world leaders are standing by them.

Former French President Nicolas Sarkozy. Yesterday, he was found guilty of corruption and sentenced to a year in prison – a first for a president in France's modern history. In a trial that lasted several months, prosecutors argued that Sarkozy bribed a judge with a cushy job in Monaco in exchange for access to confidential info on a separate case against him. The former president, who's denied any wrongdoing, can ask to stay home for his sentence (with an electronic bracelet). But his lawyer said he'll appeal the ruling.

Who's a national treasure…

Pamela A Smith. On Sunday, she took over as head of the US Park Police – making her the first Black woman to ever lead the 230-year-old federal agency. Now, she oversees efforts to police the country's national parks and landmarks.

What kicked a national anthem policy to the curb...