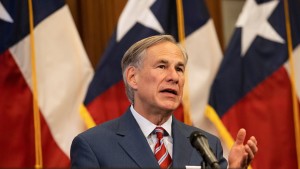 The US's battle against the coronavirus has taken one step forward, two steps back.

Yesterday, Texas Gov. Greg Abbott (R) said it's time for the state to be "100 percent" open. So he is nixing the mask mandate and will allow all businesses to open to full capacity – effectively doing away with most of its coronavirus restrictions. Abbott did acknowledge that COVID-19 is still a thing. But the state has suffered high unemployment amid the pandemic as businesses have struggled. The governor said restrictions are "no longer needed" and that everything can open up starting March 10. Mississippi said 'yeah, what he said' and followed suit.

I can't tell if this is good news or bad news.

It's raising concerns. Especially for Texas, whose residents have been reeling from a deadly winter storm that forced people to shelter together – potentially causing a superspreader event. Less than 7% of Texans are fully vaccinated. In Mississippi, that number's 7.5%. And earlier this week, the CDC reminded everyone that contagious COVID-19 variants are spreading and sprouting – and it's raised concerns about vaccines' efficacy against them. But both states appear to be saying 'you're on mute' to federal health officials who warned against easing restrictions.

You said we took a step forward too?

Maybe. Yesterday, President Biden said every American adult should be able to have a vaccine by the end of May – much sooner than his earlier July timeline. For that, you can in part thank the recent lovefest between Merck and Johnson & Johnson. The two rivals are joining forces to boost vaccine supply – days after J&J's one stop-shot was given the green light. Now, Merck will help produce and package J&J's vaccine, which could double its better half's production rate. But there are caveats.

Like the fact that it could be hard to reach herd immunity without vaccinating kids. And that it's unclear how these vaccines are doing against some of the more concerning variants circulating. Which is why things like masks and social distancing are still so important.

Since the pandemic began, the question has been 'when will this nightmare be over?' We still don't have an end date – but rolling back proven strategies to reduce the virus's reach won't get us any closer.

The US. Yesterday, it issued sanctions in response to the poisoning and arrest of Russian opposition leader Alexei Navalny. Last year, Navalny was poisoned with Novichok (an illegal nerve agent) – which had many Putin-g two and two together. But the Kremlin denied responsibility, saying if it had tried to poison Navalny it would've "finished the job." Yikes. Earlier this year, Russian authorities arrested Navalny, sparking nationwide protests. Now, the US is responding with sanctions against people like the head of Russia's security services to "send a clear signal" that chemical weapons aren't going to fly. Russia condemned the sanctions and said it would respond.

Who's out of the running...

Neera Tanden. Yesterday, the White House withdrew its nomination for the liberal think tank CEO to serve as director of the Office of Management and Budget (OMB). For weeks, the nomination had many on the Hill scratching their heads, since President Biden had called for unity...and Tanden was a polarizing figure, alienating Republicans and Democrats alike. Now, it's clear Tanden doesn't have the votes, so the White House is saying 'back to the drawing board.' It's looking for a new OMB director nominee but says it's still hoping to put Tanden in the admin in some capacity.

Vernon Jordan. Earlier this week, the civil rights leader died at the age of 85. Jordan grew up in Atlanta during the period of segregation and devoted his life to ending racial discrimination, especially in education. In 1961, he escorted Charlayne Hunter through a white mob at the University of Georgia – a place he helped desegregate. In the political realm, he chaired former President Bill Clinton's transition team and remained a close adviser to the Clintons. The NAACP called him "an icon to the world and a lifelong friend." RIP.

Neville "Bunny Wailer" Livingston. Yesterday, the three-time Grammy award winner died at age 73 in Jamaica after being hospitalized from a stroke. A pioneer in Reggae music, Wailer was one of the founding members of The Wailers – playing alongside legends Bob Marley and Peter Tosh before the group broke up in 1974. He's known for hits "Cool Runnings," "Ballroom Floor", and his album "Blackheart Man." In 2017 he was awarded Jamaica's Order of Merit, one of his country's highest honors. Jamaica's prime minister said Wailer's performances "touched the hearts and souls" of fans in Jamaica and globally. RIP.

What's not all green eggs and ham…

These books. Yesterday, Dr. Seuss Enterprises said it's no longer publishing six of the author's children's books because they exhibit racist and insensitive imagery. The decision was made with the help of educators in an effort to represent and support "all communities and families."