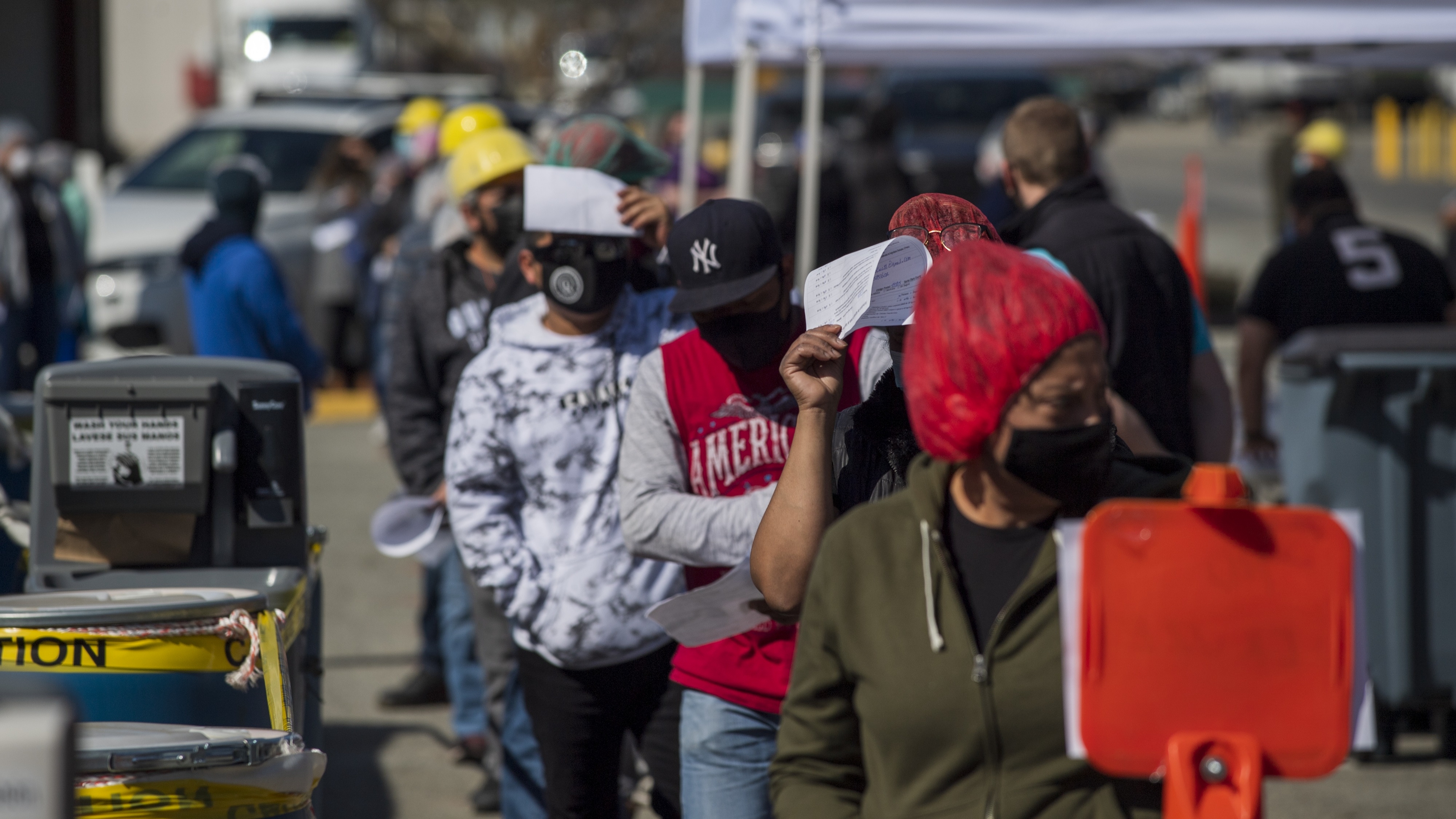 Coronavirus vaccines are not always going to those most in need.

Last week, the FDA gave the thumbs up to a third COVID-19 vaccine. Johnson & Johnson joined Pfizer-BioNTech and Moderna in successfully offering shots to Americans. And President Biden said there should be enough doses for every American adult by the end of May. The developments come as only 16% of Americans have received at least one COVID-19 dose. And as people are ringing the alarm about vaccine inequity. There are a few reasons why that could be...

Allocation…The CDC recommends states prioritize vaccinating nursing home residents and health care workers. But hasn't offered much other guidance, largely leaving states to figure out how to distribute millions of doses. Most states have reportedly developed a game plan based on county population. And rural areas, which typically have older populations, are getting overlooked as urban cities get preference. It's forcing some seniors to drive long distances to get their shots.

Jumping the line…There are reports of wealthier Americans going to extreme lengths to get vaccinated ahead of schedule. Case in point: health care provider One Medical has been accused of inappropriately handing out vaccines to those close to company execs. A California scheduling site has also been under scrutiny. And Florida Gov. Ron DeSantis (R) is facing a potential investigation after being involved in the decision to launch invite-only vaccine clinics in wealthy communities.

Distrust…Already, many Black Americans lack faith in the US's health care because of its systemic racism. Now, studies show Black Americans are getting vaccinated at much lower rates despite having higher death rates from the virus. It comes as the head of Biden's COVID-19 Health Equity Task Force warns that anti-vaxxers are targeting Black Americans on social media.

CDC Director Dr. Rochelle Walensky said they're "working really hard" to make sure there's vaccine equity. Like, working with FEMA to review census data and with federal health care centers. The Biden admin's coronavirus relief plan – which is being debated in Congress – also includes $20 billion for vaccine distribution. Meanwhile, Interpol is warning that there are fake COVID-19 vaccines floating around after authorities in China and South Africa seized thousands of doses.

Americans have long waited for vaccines that can help bring the world back to normalcy. But those who the system often forgets are being left behind again. Now, it's up to lawmakers to figure out how to make sure vaccines are going to those who need them most.

PS: We spoke with CDC Director Dr. Rochelle Walensky on this week's episode of "Skimm This." Hear what she had to say about the new vaccine, two pieces of advice for every governor, and what it will take for schools to reopen.

What's caught in the middle...

The World Health Organization. Yesterday, two dozen scientists published an open letter calling for a new investigation into the origins of COVID-19. Here's what ideally happens in an epidemic: WHO scientists swoop in, analyze how a virus originated, and publish reports to try to prevent it from happening again. But this virus has gotten political. In January, a team of WHO scientists finally got into China to do their digging – but they've been reportedly restricted in what they can access. Now a team of scientists, including from the US and France, are saying 'we want better.' They think the current investigation has been discredited and want a do-over that can more independently figure out the origins. But the WHO is saying 'be patient' – and that when its report comes out in the next couple of weeks it will include key info.

What's got birth control on the mind…

Chile. Earlier this week, The New York Times reported that the country recalled nearly 277,000 packets of oral contraceptives since August. The reason: faulty packaging and missing or crushed pills – which were all provided by the public health care system. But the gov was quiet about the recall, and reproductive rights activists say the lack of communication led to at least 140 unintended pregnancies. Now, some are telling the gov, 'explanation please.' And the birth control manufacturer's been hit with a $92,000 fine. Activists argue the gov's failure is leaving women without a choice, since abortion there is only allowed in cases of rape or when the mom's health is at risk.

Venezuela. Over the course of the country's eight-year economic collapse, contraceptives have become inaccessible for many women – leading to unplanned pregnancies at a time when people can barely scrape by to feed their families. Some Venezuelans make just a few dollars a day, and condoms cost about $4.40. Birth control, which was once affordable and available, has become difficult to find (or too expensive) amid the country's failing health care system. Now, abortion activists say there's been an uptick in the number of women looking for abortions, most of which are illegal – and that all this could be putting their lives at risk.

Who's duking it out…

The royals. A report this week came out accusing Meghan Markle of bullying her former staff, including driving out two former assistants. A spokesperson said Markle was "saddened" by the "attack on her character." And called it a "calculated smear campaign." But the drama didn't let up. Buckingham Palace said it was "very concerned" and that it would investigate the claims. The timing of all this airing of dirty laundry has many asking questions. That's because of...

What else is Coming 2 America...