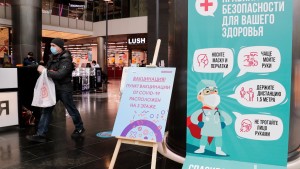 Well, if diplomacy is when countries negotiate to get what they want, vaccine diplomacy is doing that with (you guessed it) vaccines – by sharing and distributing doses. It's been around since the creation of the first ever successful vaccine (smallpox in 1796) but has become top of mind during the COVID-19 pandemic. At least four countries have been making major vaccine moves as part of their diplomatic relations:

China…The country's approved five vaccines – all developed locally. And has administered 65 million doses to its citizens. But it's looking to give 500 million vaccine doses to at least 45 countries in nearly every continent (including Hungary, Chile, and Egypt). Some experts say this move is a major step in gaining political and economic influence as China works to compete with the US and others on things like 5G and other infrastructure projects (see: the Belt and Road Initiative).

Russia…It was the first country to approve a COVID-19 vaccine (Sputnik V). But health experts and many Russian citizens (over half the population) are skeptical either because of how quickly it was rolled out or because there isn't much info on it. So far, less than 3% of the population's been pricked. But the country reportedly supplies more than 388 million doses to 20 countries (including Mexico, India, and Brazil). And is in talks to send out another 365 million doses. Which has some EU countries saying 'we want in.' As with China, Russia has some Big Competitive Energy with the US. And the thinking is that gaining favor through vaccine diplomacy could help give it an edge.

India…The country is a huge vaccine manufacturer – reportedly creating nearly 60% of the world's vaccines before the coronavirus even came into play. In January, it rolled out its own COVID-19 vaccines (Covaxin, Covishield). And began giving vaccines to its neighbors like Nepal, Bangladesh, and Myanmar. The move was seen as an effort to push back against China's influence in the region. But as one of the most populated countries in the world, one analysis shows India has only fully immunized about 0.5% of its population.

The US…It currently has three vaccines in circulation (Pfizer, Moderna, and Johnson & Johnson). Hundreds of millions of doses have been ordered, and more could be coming soon. The US has administered more vaccines than any other country, fully inoculating 12% of Americans. And has pledged $4 billion to COVAX – an initiative that's bringing vaccine access to poorer countries. But it's still lagging behind in the vaccine diplomacy race. Now, it plans to send over 4 million doses to Mexico and Canada. But there seems to be a catch. Or two.

First, the US considers it a "loan" to Mexico and Canada. Meaning, the two countries may have to share their excess vaccines with the US in the future. TBD how that works out. Second, the US is planning to send doses of the AstraZeneca vaccine – one that has yet to be approved by the FDA. And that's faced some heat lately (hi, EU) after 37 people reported blood clots after getting pricked. Health experts, EU regulators, and the vaccine maker all say 'don't worry, the vaccine is safe.' (Note: some contraceptives or being pregnant can put you at a higher risk for blood clots.) But the US says it wants to ensure its "neighbors can contain the virus."

Vaccine diplomacy isn't just about sharing – it's a way that countries can win friends to further their national agendas. And in this case, it could be crucial to ending the pandemic. The US has lagged behind in the race so far but it's now playing catch up. TBD if it's got a shot.

Delaina Ashley Yaun, 33. Xiaojie Tan, 49. Paul Andre Michels, 54. Daoyou Feng, 44. And the four other lives lost who've yet to be identified in this week's senseless shootings in Atlanta. RIP.

Armie Hammer. Yesterday, a 24-year-old woman publicly accused the actor of rape and physical and emotional abuse. The woman, who identified herself as Effie, said she was in an on-and-off relationship with Hammer. And that in 2017, he "violently raped" her in Los Angeles. It's the latest allegation against the actor. Since January, at least two other women have come forward with stories alleging sexual, physical, and emotional abuse. And an Instagram account – under the name House of Effie – posted screenshots of alleged messages from the actor, reportedly expressing disturbing sexual fantasies of cannibalism and rape, affairs, and sexual misconduct. Now, Los Angeles police are confirming they've been investigating Hammer for sexual assault since last month. Hammer's lawyer called the latest accusation "outrageous."

Xavier Becerra. Yesterday, the California attorney general narrowly got the Senate's approval to serve as the Biden admin's Health and Human Services sec. Becerra will be the first Latino to lead the dept, playing a major role in the country's vaccine rollout. And sheltering migrant children at the southern border.

What has us saying 'well this is moo'...

Cows' diets. This week, researchers said that feeding cows seaweed can cut their methane emissions by 82%. It's no secret that agriculture is a contributing factor to climate change – it makes up 10% of US emissions. And about half of it is from cows belching and farting (yes, ew), which releases methane – a potent greenhouse gas that can warm the planet 80 times as quickly as CO2. But kelp is on the way: researchers are saying feeding cows seaweed is "effective at reducing greenhouse gases." And are now looking at ways to get seaweed to farmers, stat. Cow pose.

Who's editing herself out...