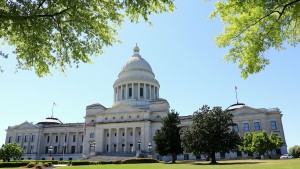 New laws in Arkansas are raising alarms for the LGBTQ+ community.

Last week, Arkansas Gov. Asa Hutchinson (R) signed a bill into law allowing health care workers to refuse treatment on moral or religious grounds. It's known as a "conscience" or "refusal" law. Since the 1970s, such laws have let health care officials say 'I'll pass' on performing (or helping perform) abortions or other procedures that go against their religious or moral beliefs. At least 46 states have refusal laws – and former President Trump tried to implement a similar rule nationwide in 2019. Now, new versions of these laws could be targeting LGBTQ+ patients.

Starting this summer, health care providers in Arkansas can legally decline to perform non-emergency procedures that violate their beliefs. Meaning, pharmacists could refuse to fill birth control or PrEP prescriptions, doctors could reject giving hormone treatments or performing gender reassignment surgery, and counselors could decline therapy to a same-sex couple.

Critics like the Human Rights Campaign, the ACLU, and the Arkansas Chamber of Commerce say it targets an already vulnerable group and could exacerbate the discrimination in health care the LGBTQ+ community already faces. Gov. Hutchinson defended the new measure, saying it doesn't target a specific group of people – just certain services. And reminded people that there are federal laws banning discrimination on the basis of sex and gender. But this isn't the only law Arkansas has passed against the LGBTQ+ community.

Like Mississippi and Tennessee, last week, Gov. Hutchinson also signed a law banning transgender women and girls from playing on women's sports teams. He said it would "promote and maintain fairness." (Because all sports play fair, right NCAA?) And yesterday, Arkansas lawmakers passed a bill that would ban gender-affirming medical care to transgender youth (think: puberty blockers, transition surgery). If the governor signs it, Arkansas will be the first state in the country to approve such a ban. But at least 25 states have intro'd over 60 bills targeting trans youth just this year.

Amid a pandemic and a growing mental health crisis, new laws across the country are targeting a community that already faces severe discrimination. And in Arkansas, that means going so far as to potentially block treatment that could mean life or death for some people.

History of Anti-Asian Racism in the US

Two weeks ago today, a gunman killed eight people at three spas in or near Atlanta. Six of the victims were women of Asian descent. The news rattled the country, especially as major cities across the nation saw a nearly 150% rise in anti-Asian hate crimes last year.

All of this has sparked calls to "Stop Asian Hate" and Americans across the country are showing up to support the Asian American Pacific Islander community.

And one way to do that is by understanding the long history of discrimination the AAPI community has faced in the US and utilizing the resources here to do something about it.

What people are plugged into…

Derek Chauvin's trial. Yesterday, it began with opening statements in Minneapolis. Chauvin's accused of killing 46-year-old George Floyd when he pinned him to the ground and knelt on his neck for about nine minutes last Memorial Day. Before the trial started, Floyd's family and lawyers knelt in front of the courthouse for that amount of time. And one of the family lawyers called the trial a "referendum on how far America has come" in its fight for equality and justice. Here's what happened:

Reliving this horrific time in America's history is hard. Here are some resources that can help.

Where the crackdown is getting worse…

Hong Kong. Today, China cut the number of directly-elected seats in Hong Kong's legislature by nearly half. In 2019, Hong Kong saw months of pro-democracy protests in the semi-autonomous Chinese territory, gaining national attention. But this move is seen as Beijing's latest effort to curb Hong Kong's pro-democracy movement, raising concerns about China's growing influence in the territory. Earlier this month, Beijing added more seats to the committee that elects Hong Kong's leader. Now, the new legislature will be expanded to 90 seats (from the original 70). And 20 of them will be elected by the public (instead of 35). And those who want to run for election will need to be vetted by a committee to make sure they're "patriots."

What else people are paying attention to…

COVID-19. Yesterday, the CDC said the Pfizer and Moderna coronavirus vaccines were 90% effective in preventing COVID-19 two weeks after the second dose. But despite over 51 million people in the US being fully vaccinated, COVID-19 cases are back on the rise as variants continue to spread and restrictions are eased across the country. CDC Director Dr. Rochelle Walensky said she's worried of an "impending doom" if people don't take the necessary precautions to limit the spread of the virus. So wash your hands, practice social distancing, and consider double masking.

What ship has (finally) sailed...

The Ever Given. Nearly a week after it got stuck in the Suez Canal, the 200,000-ton cargo ship was freed. Big deal, since the canal is one of the most important oil routes in the world. And the blockage reportedly cost the industry nearly $10 billion in trade a day. Now, investigators are looking into how this happened, especially since it had another accident in 2019.

When a not-so-haunted house opens…

So does a Schitty motel.