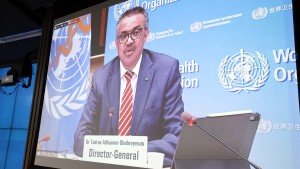 Scientists are looking at the past to prepare for the future.

Sure is. Yesterday, the World Health Organization released its report on the origins of COVID-19. For months, dozens of countries pushed China to let the WHO investigate how the pandemic got started. After a series of delays, China let in 13 WHO researchers earlier this year to do some digging. But there were restrictions. The scientists couldn't access raw data like biological samples. And when writing up the report, Chinese scientists – reportedly affiliated with the government – got a say in the conclusions.

That there were four ways the virus could have gotten to humans: 1) direct transmission from an animal, 2) transmission via an intermediate animal host, 3) via frozen food, or 4) a lab accident. The report says (2) is most likely – that it jumped from bat to another animal before infecting humans. And dismissed the lab accident as the least likely option. But the WHO director-general said that the lab theory "requires further investigation" and that "all hypotheses remain on the table." It was the WHO's most confrontational comments yet toward China. And came as the US and more than a dozen other world leaders criticized the study for the lack of access to data. But even as the world still reels from COVID-19, leaders are looking ahead.

Yesterday, the leaders of more than two dozen countries, the European Council, and the WHO released a joint statement calling for an international treaty to address future pandemics. The treaty would take cues from international collaboration after World War II and work to provide universal and equitable access to vaccines, medicine, and PPE – unlike what we're seeing now. Because, as world leaders are warning, the question isn't if we'll see another pandemic, but when.

The world's been waiting to find out the origins of the coronavirus. But with unsatisfying answers, world leaders are now focusing on a different question: 'what do we do when this happens again?'

What we're learning more about…

George Floyd's death. Yesterday marked day two in Derek Chauvin's murder trial. The courtroom heard testimony from six people, including from four witnesses who were minors at the time of Floyd's death. They all shared the emotional toll it has taken on them, with one saying "there was nothing" she could do. The teen who recorded the viral video of the incident said she's spent many nights "apologizing" to Floyd for not doing more to save him. A nine-year-old witness remembered feeling "sad and kind of mad" at how Chauvin kneeled on Floyd's neck. Another witness, who's an EMT and firefighter but was off-duty at the time, testified that police prevented her from checking Floyd's pulse. The trial continues today with more witnesses.

Anti-Asian violence. Earlier this week, a 65-year-old Asian American woman was attacked in broad daylight near New York City's Times Square. Video shows a man kicking the woman, stomping on her face, and reportedly shouting anti-Asian slurs. She suffered serious injuries and is recovering at the hospital. The video also shows several bystanders doing nothing to intervene, one even closing the door as the woman struggled on the ground. NYPD has released photos of the suspect and is investigating the attack as a hate crime. It was the fifth known anti-Asian attack in New York in just the past week – and came amid nationwide calls to "Stop Asian Hate."

The US has a long history of anti-Asian racism. Here's what you need to know about the country's past discrimination against the AAPI community and how you can help combat it.

What could be getting its legal team ready…

Georgia. The state's been hit with three lawsuits over its new voting restrictions. Last week, Georgia Gov. Brian Kemp (R) signed a Republican-led state bill that limits the use of ballot drop boxes, shortens the early voting period for runoffs, and imposes new ID requirements for absentee ballots. Republicans said the changes would help build election integrity and prevent fraud. But voting rights activists are calling it voter suppression and filing suits – with the latest coming from the ACLU, the NAACP Legal Defense and Educational Fund, and the Southern Poverty Law Center on behalf of several groups.

The Final Four. On the men's side: it's Houston vs. Baylor and UCLA vs. Gonzaga. And on the women's: Arizona vs. UConn and South Carolina vs. Stanford. Next up: the semifinals, happening this weekend.