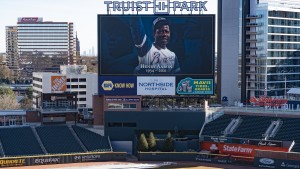 Georgia. On Friday, MLB said it's moving this summer's All-Star Game and draft out of Atlanta because of the Peach State's new voting restrictions. Last month, GA approved a sweep of changes including limiting the use of ballot drop boxes, shortening the early voting period for runoffs, and making it a crime to hand out food and water to voters. Republicans said it would prevent fraud and improve election integrity. But voting rights activists are calling it voter suppression and filed three suits against the state. Now, MLB's saying it "supports voting rights for all Americans" and is taking the All-Star Game elsewhere.

Georgia's Governor Brian Kemp (R) denounced the move that'll cost the state an estimated $100 million, saying MLB "caved to fear" and "liberal lies." But the decision didn't come out of left field. For days, Dems had called on orgs and businesses to speak up against the new law. Commissioner Rob Manfred said the decision came after he spoke with former and current players, and groups like the Players Alliance – an org of Black players formed after George Floyd's death. And he had President Biden's support.

MLB has yet to announce a new host city for its All-Star Game and draft. But its decision could be a warning to the 43 states that are reportedly trying to curb voting access through at least 250 bills. Meanwhile, the PGA Tour said it couldn't move this summer's Tour Championship in Atlanta because of financial commitment to its charities and the local community, and said it "fully supports efforts to protect the right of all Americans to vote." And Augusta National, which leads the Masters Tournament – an event that's had slow racial equity progress – is expected to address the issue this week.

Georgia's politics on voting restrictions are moving into extra innings. And while the battle stretches on, eyes are also on other states and orgs to see how they play defense or offense when it comes to voting laws.

Editor's Note: An earlier version of this newsletter incorrectly stated the PGA Tour operated the Masters Tournament. We apologize for the error.

"Vaccine passports." On Friday, Gov. Ron DeSantis (R-FL) issued an executive order banning the document (a pass for the fully vaccinated to live like it's 2019). He said it would "create two classes of citizens based on vaccinations." The order puts a stop on any gov entity from issuing a COVID-19 vaccine passport. And prevents businesses in the state from requiring any kind of document from their patrons. The ban comes as the country ramps up vaccinations – 18.5% of the nation is now fully vaccinated. But the fed gov has largely stepped out of the ring on the issue of vaccine passports – leaving it up to the private sector to figure it out.

Wastewater. On Saturday, the Florida gov issued a state of emergency after a reservoir that holds hundreds of millions of gallons of wastewater sprung a leak. Problem because the water contains small amounts of radioactive materials like uranium and radium and the situation's being called an "imminent hazard." The potential flooding (if the reservoir's structure collapsed) could create a 20-foot wall of water in a matter of minutes, flowing into nearby communities. Officials have evacuated more than 300 homes as they scramble to prevent a "catastrophic flood situation."

Jordan. Over the weekend, the gov accused former Crown Prince Hamzah bin Hussein (King Abdullah II's half-brother) of conspiring to destabilize the kingdom and placed him under house arrest. After intercepting Hamzah's communications, the gov said he and several others took part in meetings in which the king was criticized. Hamzah – who had previously spoken out about how the country is governed – denied any wrongdoing, and said the gov had no one to blame but itself for its "corruption" and "incompetence." Meanwhile, the king is hoping to solve this situation internally – especially since Jordan is seen as one of the most stable countries in the region.

US Capitol Police. On Friday, one officer was killed and another injured after a man rammed into a police barricade outside the Capitol building. And then got out of his car with a knife and started lunging toward police. The suspect was shot and killed at the scene. There is still no clear motive behind the attack – the latest since the insurrection in January. The head of the Capitol Police union is calling on Congress to increase security, saying it's "struggling to meet existing mission requirements." And President Biden ordered flags at half-staff in honor of Officer William Evans.

Who people are thinking of...

DMX. Over the weekend, the Grammy-nominated rapper suffered a heart attack and was hospitalized. His manager said he was still unresponsive and in a "vegetative state." Friends and family of the artist shared prayers and support on social media.

Who dribbled into a win...

Stanford. Yesterday, the Cardinal beat Arizona 54-53, winning the 2021 NCAA women's basketball tournament for the first time in nearly 30 years. Today, it's the men's turn – with Gonzaga facing Baylor for the top title.

...Oh and speaking of basketball, it's almost Game Time.

Where history was (finally) made...