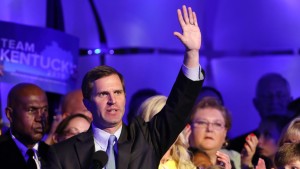 Kentucky is making it easier to vote.

You've got me in a good mood and it's not even Friday.

We love to hear it. Yesterday, Gov. Andy Beshear (D) signed into law a bill expanding voting access. The new law calls for three days of early voting, sets up more in-person voting centers, and creates an online portal to register and request absentee ballots. Kentucky's now the only state with a Republican-controlled legislature to expand voting rights – at a time when one analysis found that legislation has been introduced in 47 states trying to restrict voting.

Beshear called it a "a good day for elections'' and commended Republican and Democratic lawmakers in Kentucky for coming together to "stand up for democracy." It's not the first time Beshear's addressed voting rights during his term: In 2019, he restored voting rights to more than 140,000 nonviolent felons after they completed their criminal sentences. But critics are still saying 'it's not that hard,' especially since Kentucky had some of the most restrictive voting laws before yesterday's change. And voting rights advocates are saying 'do more, please.'

For one, Kentucky's new three day early-voting period is reportedly still one of the shortest in the country. (Note: Before this law, KY was among six states that do not allow the process at all.) And polls close at 6pm on Election Day – the earliest time in the country. So KY's expanded voting laws are still more restrictive when compared to recently-turned-blue Georgia's latest overhaul on voting laws. A move that caused backlash, including costing the Peach State the MLB All-Star Game.

The pandemic has pushed dozens of states to expand voting access for safety reasons. Now, Kentucky stands out as a red state willing to cement progress on voting accessibility, even as others are eager to turn back the clock.

AstraZeneca. Yesterday, European regulators said there's a "possible link" between the AstraZeneca coronavirus vaccine and rare blood clots, mostly in women under 60. Last month, about a dozen European countries temporarily suspended the shot amid reports of blood clots. The drug company said 'all's good' and health experts warned against pausing vaccinations. Now, an EU health agency says the shot should come with a warning of possible blood clots in people with low blood platelets. But the agency's still encouraging the shot, adding the benefits "outweigh the risks of side effects." The UK's recommending people under 30 get alternative vaccines – joining countries like Canada and Germany which have also made similar moves.

Who's getting into the virtual world...

The US State Dept. Yesterday, it reportedly announced a new diplomacy program centered around video games. The goal is for youth in the US, Middle East, and North Africa to form connections as they create social impact games. And for them to develop STEM and leadership skills in the process. Now, this program's creating a league of legends with 2,700 students in the US, Israel, the UAE, and Bahrain. They'll reportedly have 10 weeks to create a video game based on the social issue of their choice. Players, time to (Mine)craft.

Tom Brady. This spring, the Super Bowl champ will be expanding from NFL games to the NFT craze. He's launching Autograph – an NFT platform that'll allow celebs, athletes, and other entertainers to create digital collectibles. Reminder: NFT stands for non-fungible token. Meaning, it's one of a kind, irreplaceable, and completely digital. Musicians, athletes, and artists have been scoring big – earning upwards of millions of dollars from selling their memorabilia, music, or art as NTFs. Now, Brady's jumping in with his own game plan.

Psst...here's what to know about investing manias like NFTs before jumping in wallet-first.

Who's sticking his neck out for his species...