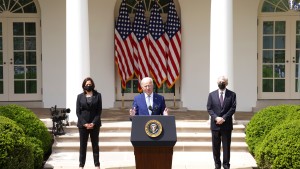 Yesterday, the president issued several executive actions to confront what he called the country's gun violence "epidemic." It's the Biden admin's first move on gun control. And follows deadly shootings in Georgia, Colorado, and – most recently – in California, South Carolina, and Texas. But despite the president calling gun violence an "international embarrassment," his actions aren't expected to result in immediate change.

What do they do?

Tell the Justice Dept to focus on a few things. That includes ghost guns. These self-assembled (sometimes 3D-printed) weapons are on the rise in major cities. But they don't have serial numbers so they can't be traced. Biden wants the DOJ to come up with a plan to crack down on them. He also wants to crack down on stabilizing braces, which turn pistols into rifles – and were allegedly used by the gunman in Boulder. And "red flag" laws. These allow families or officials to ask a court to remove someone's firearm if they present a danger to themselves or to society.

Right – a lot of the announcements involved Biden telling the DOJ to handle it. He also wants the Bureau of Alcohol, Tobacco, Firearms and Explosives to publish an annual report on weapons trafficking. And to invest $5 billion over eight years into community programs fighting violence. Beyond that, he said Congress needs to "go further."

Anti-gun violence advocates said it's 'about time' for some of these moves. Some critics wondered whether this will change anything. Others said the efforts infringe on their Second Amendment rights.

More than 100 Americans die each day at the hands of guns. And it's still unclear what the tangible impacts of yesterday's announcement will be.

Derek Chauvin's murder trial. This week, America heard from experts on the former police officer's actions and George Floyd's death. Prosecutors are trying to prove that Chauvin's excessive force led to the 46-year-old Black man's death last year. And the defense is trying to prove Floyd's opioids and underlying health problems killed him, not Chauvin. The trial's expected to last until the end of this month. Here's a recap of week two so far:

Northern Ireland. It's been experiencing a spike in violence over the past week. Reminder: Northern Ireland is part of the UK, and the Republic of Ireland is part of the EU. And while the UK officially left the EU last year, the process complicated the relationship over the border between Northern Ireland and Ireland. Things have been boiling over since Protestant unionists want to be part of the UK, while Catholic nationalists want a united Ireland. Earlier this week, violence escalated along the so-called peace wall that separates the two. Protesters set buses on fire, and threw Molotov cocktails across the wall. Yesterday, police fired a water cannon for the first time in six years to disperse crowds. Over 50 police officers have been injured. Now, the US, UK, and Northern Ireland, and Ireland are calling for calm.

PS: if you're struggling to get pregnant, we Skimm'd the fertility methods that could help.

What's showing us the power of the digital world…

An NFT we can get behind.

What there's a shortage of...