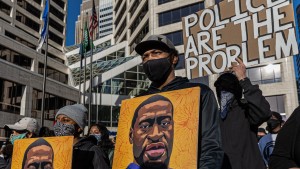 Tell me what I need to know.

The former Minneapolis police officer is accused of killing 46-year-old George Floyd by kneeling on Floyd's neck for 9 minutes and 29 seconds. It happened on Memorial Day last year – a day that's renewed America's racial reckoning. Over the last three weeks, the jury (and the rest of the country) heard from 45 witnesses, including paramedics, police officials, bystanders (some who were minors at the time of Floyd's death), and loved ones. Many shared the emotional toll the Black man's death had on them, saying they wish they could've done more to save him. One person we didn't hear from: Chauvin himself. Yesterday, his defense team and the prosecution gave their closing arguments. Here's how that went:

The defense...Throughout the trial, it has focused on undermining Floyd's credibility. They've argued that Floyd could've died from his pre-existing heart disease, drug use, or even from carbon monoxide poisoning from the police car's exhaust. In their closing arguments, the defense team said the prosecution failed to prove "beyond a reasonable doubt" that Chauvin should be found guilty.

The prosecution...The team brought in several medical experts to dispel the defense's claims. One said any healthy person would have died when "subjected to what Mr. Floyd was subjected to." Prosecutors played a video of Floyd saying "I can't breathe" 27 times as police restrained him. In their closing arguments, they told the jury Floyd didn't die because his heart was "too big" (as the defense argued), but because Chauvin's was "too small."

The jury deliberates Chauvin's fate. He's facing three charges: second-degree murder, third-degree murder, and second-degree manslaughter. Here's how the jury could rule: acquittal (innocent of one or all charges), conviction (guilty of some or all charges), or they could be stuck at a standstill with no unanimous verdict (hung jury) – which could lead to a mistrial. If convicted, Chauvin could be looking at 12.5 years behind bars. The judge could decide to give him more or less time. And while it's rare for an officer's trial to get this far, eyes aren't only on the courtroom.

Over the weekend, Rep. Maxine Waters (D-CA) told protesters in Minnesota "we've got to get more confrontational" if Chauvin isn't convicted – comments that Republicans said were inciting violence. The judge in the trial said it could give Chauvin's defense team the opportunity to appeal the verdict. Minnesota, which has already seen nightly protests over Daunte Wright's death, is bracing for even more unrest. Minneapolis has called in additional security (think: 3,000 National Guard soldiers), stores have boarded up, and schools plan to go remote starting tomorrow. Cities across the country like Washington, DC, and Philadelphia are also taking extra security measures.

The end of Chauvin's trial is near. Depending on what the jury decides, the US could be looking at a stain on our country's justice system or an opportunity to address police reform and systemic racism.

Walter Mondale. Yesterday, the former Democratic vice president died at 93. Mondale (aka "Fritz") served under President Jimmy Carter between 1977 and 1981 – and was known for his longstanding support of social justice issues. He was considered the first VP to be treated as a true partner to the president and helped steer the Democratic Party in the aftermath of the 1960s. After serving as veep – and as a senator and Minnesota's attorney general – Mondale ran for president in 1984. In that bid, he became the first presidential candidate to select a woman, Geraldine Ferraro, as his running mate. The first-ever female VP Kamala Harris credited Mondale with opening "a new door to the future." Former President Carter called him the "best vice president" in US history. RIP.

The Biden admin. Yesterday, ICE and CBP (Customs and Border Protection) directed staff to stop using terms like 'alien' and 'assimilation' when referring to immigrants. For years, immigration advocates have said the terms are dehumanizing to immigrants. Now, the Biden admin is calling on immigration agencies to use "noncitizen," "migrant," "undocumented noncitizen," or "undocumented individual" instead. And to replace "assimilation" with "integration." The move is part of the Biden admin's bigger effort to break away from former President Trump's immigration stances. ICE and CBP said they'd work to use more inclusive language and bring dignity to the people they interact with.

Alexei Navalny. This week, the Russian opposition leader was hospitalized amid concerns over his deteriorating health. Remember, he's the one who was sent to a prison camp (for over two years) after recovering from being poisoned. Navalny recently went on a hunger strike to protest the prison's lack of medical care. Now, he's gone more than two weeks without food and his doctor worries he could die any day. Russia says 'he'll be fine, we're giving him vitamins.' And the US has warned of consequences if Navalny dies.

Who's got tech updates...

Apple. Recently, it said it will let Parler back onto its App Store – about three months after it booted the app following the Capitol riots. Apple says Parler has improved its guidelines around violent content and can be downloaded once it releases an update.

Tesla. Yesterday, two fed gov agencies said they're investigating a Model S crash near Houston, Texas, that killed two people over the weekend. It's unclear if the car's Autopilot played a role, but no one was in the driver's seat when the crash happened.

...Oh and speaking of company updates, Peloton says it won't recall its Tread+ treadmill despite there being 39 accidents tied to it.

Who's got real Ingenuity…