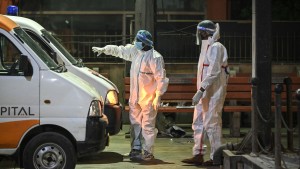 India's COVID-19 cases are at an all-time, worldwide high.

Today, India reported over 332,000 cases – setting another global record for the highest daily increase of infections since the beginning of the pandemic. For reference, the US's highest record surpassed 300,000 in January. India is the second-most populous country in the world and the coronavirus has caused its health care system to break down. Hospitals are at capacity, there aren't enough ambulances, and people are dying as the country's oxygen supply for ventilators runs out. On top of that, PPE is scarce – reportedly leading many to resort to the black market for used gloves, masks, and even drugs. And that's not all.

New variants are stoking fears things could get worse. India's detected several COVID-19 variants, including the UK, Brazil, and South Africa strains. And B1617, the "double mutant" variant first detected in India, is raising alarms. Note: It's common for a virus to change and mutate. But scientists say this could make the variant more contagious and weaken a vaccine's effectiveness. Right now there's reason to be hopeful that some vaccines (like Pfizer's) can combat the India variant. But India's got its own vaccines.

And those would be?

Covaxin and Covishield. The gov rolled those out in January. And recently it approved Sputnik V – Russia's vaccine. But despite being home to the biggest vaccine manufacturers in the world (and producing 60% of the world's vaccines), less than 2% of India's population is fully vaccinated. That's in part due to vaccine hesitancy. And the international community is worried. China said it would step in to help. And an Indian vaccine manufacturer is pleading for the US to lift its ban on exports so that the country can receive raw materials to create more vaccines. Meanwhile, several countries (like the US, UK, and New Zealand) added India to its travel ban list.

COVID-19 has debilitated country after country. While some may be seeing the light at the end of the tunnel, India is struggling amid new variants. And many are pleading for help.

The DC statehood bill. Yesterday, the Democratic-controlled House passed legislation to make Washington, DC, the 51st US state. In the federal district, DC's residents can vote in the presidential election. But they have no representation in the Senate – despite having a larger population than Vermont and Wyoming. For years, DC residents (86%) have wanted to get equal representation in Congress and expand voting rights to a population that's 46% Black. But Republicans say 'this isn't in the Constitution' and argue the bill's a ploy for Dems to get more congresspeople on their side (DC's largely blue). Now, the bill heads to the Senate, where it's expected to fail for the second year in a row.

The anti-Asian hate crimes bill. Yesterday, the Senate overwhelmingly passed it with bipartisan support. The bill gained traction after six Asian women were killed in the Atlanta area last month. And as a report showed major US cities saw a 150% rise in anti-Asian hate crimes last year – partly attributed to former President Trump's xenophobic language during the pandemic. Now, the DOJ could be asked to review coronavirus-related hate crimes, and the measure would help fund states and local govs to identify hate crimes. Sen. Mazie Hirono (D-HI), who sponsored the bill, said it "sends a clear and unmistakable message of solidarity" to the AAPI community. The bill heads to the House, where it's expected to pass on to President Biden for his signature.

PS: We've got tips for how to be an ally in the fight against racism. It can start with acknowledging the history of anti-Asian racism in the US.

Andrew Brown Jr. On Wednesday, the 42-year-old Black man was shot and killed by sheriff's deputies in Elizabeth City, North Carolina. Authorities say they had a search warrant for Brown, but didn't provide further info on what led up to the shooting. Witnesses say that police shot at Brown multiple times as he tried to drive away and he hit a tree. Brown's death sparked protests, and came less than 24 hours after Derek Chauvin's murder conviction. Now, the community is calling on the sheriff's office to release the deputy's body camera footage. At least one deputy involved is on leave pending an investigation.

Who got into the Earth Day spirit...

World leaders. Yesterday, several heads of state pledged to cut greenhouse gas emissions at a climate summit. It came after President Biden promised to decrease US emissions by at least half by 2030 – nearly double what the US had agreed to under the Paris climate deal. Now, countries like Japan and Canada are upping their sustainability game. And even Brazil's president (who hasn't prioritized conservation) seems to be turning over a new leaf. About time because the clock's ticking.

Who has big plans this weekend…

Hollywood. Mark your cals: the Oscars are this Sunday. We spoke to NYT media reporter Nicole Sperling on this week's ep of "Skimm This" about how COVID-19 and streaming impacted this year's awards. Plus, what to binge before the show starts.