Daily Skimm: Armenian Genocide, the Oscars, and a Long Stay in a Cave 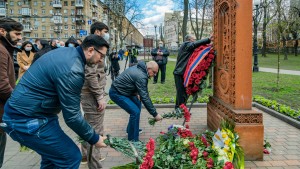 The US has officially acknowledged the Armenian genocide.

At the turn of the 20th century, the Ottoman Empire was crumbling and many distrusted the loyalty of the Christian Armenians in the east. On April 24, 1915, Ottoman forces rounded up and executed hundreds of Armenian intellectuals. Many were deported to places like Syria, with countless dying in the trek. In all, an estimated 1.5 million Armenians were killed in what many consider the first genocide of the 20th century. That includes the 29 countries that have acknowledged the genocide. Now, more than a century later, the US is joining the list.

On Saturday, Biden marked the annual Armenian Genocide Remembrance Day by officially declaring the mass killings a "genocide." He said America honors "all those Armenians who perished." And that acknowledging the genocide could help prevent history from repeating itself. Biden's statement fulfilled a campaign promise he made last year to officially recognize it – something Congress did in 2019. The move had been encouraged and supported by Armenian American activists for decades. And Biden's decision broke with previous presidents who didn't want to strain relations with Turkey – a NATO ally.

Already, the US and Turkey don't have the best relationship. Now, tensions are dialed up. That's because Turkey has long denied what happened was genocide. The country argues that the numbers are inflated and that people died as a result of civil unrest, not systemic ethnic cleansing. It's been a crime in Turkey to even bring up what happened. Turkish officials are condemning Biden's move, calling it "simply outrageous" and have promised to respond in the coming months. Meanwhile, the US embassy in Ankara and consulates are closing in Turkey today and tomorrow out of concern for potential protests.

Biden is breaking with tradition in his willingness to acknowledge a century-old genocide. But it's unclear if the US will be taking stronger stances on other massacres.

India. In the last few days, India's set and broken daily records for COVID-19 cases. Today, it broke another (read: over 350,000 cases). The rising number of cases – driven by things like variants and large gatherings – has crumbled the country's health care system, and India's called for international help. Yesterday, the US said it's sending drug treatments, rapid coronavirus tests, and PPE to the country. As well as raw materials for it to create more vaccines. And the UK is sending over 600 medical devices like ventilators and oxygen equipment and said it'll "continue to work closely" with the Indian gov in its fight to end the pandemic.

Johnson & Johnson. On Friday, the CDC and FDA agreed to give the company the green light to resume its single-shot COVID-19 vaccine after an 11-day pause. Earlier this month, six women reported rare blood clots in the brain that led to "stroke-like" illness. J&J decided to pause its vaccine rollout in Europe and the US held off on giving out the vaccine as it investigated. Last week, EU regulators said 'it's good to go.' Now, health officials in the US say the shot is safe to use. And Dr. Anthony Fauci says it's important for as many people as possible to continue getting vaccinated.

...Oh and, speaking of people getting vaccinated, one analysis found that more than 5 million people in the US have skipped their second COVID-19 vaccine dose – a move that could leave people at a higher risk of infection from variants.

Isaiah Brown. Last week, the 32-year-old Black man was shot and injured by a sheriff's deputy in Virginia. It came less than an hour after the same deputy gave Brown a ride home after his car broke down. Authorities say the deputy then responded to the same area for a "domestic incident" involving Brown. Family lawyers for Brown say the deputy allegedly mistook Brown's cordless house phone for a gun, shooting him. And say Brown's in the hospital "fighting for his life," after reportedly being shot ten times. Authorities released the body camera video of the shooting on Friday. The deputy has been put on admin leave and the shooting is being investigated.

Who's waking up with some new hardware...

These Oscar winners. Last night, Hollywood's biggest night saw women of color make history. Chloé Zhao became the first woman of color to win best director for "Nomadland." And Youn Yuh-jung became the first Korean actress to win an Oscar. Mia Neal and Jamika Wilson made their (makeup) mark as the first Black women to win for makeup and hairstyling. Other highlights include: the Oscar for best "Da Butt" dance going to Glenn Close. And Frances McDormand's latest role as a she wolf. But Regina King knows it's been a year. And Twitter knew Chadwick Boseman deserved more.

While some are seeing stars and a Pink Moon…

Others prefer staying in the dark.