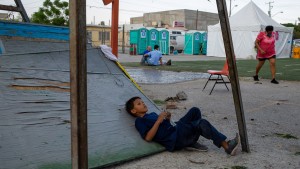 The number of unaccompanied children at the border is falling.

In March, officials reported nearly 19,000 unaccompanied children crossing into the US via Mexico – the highest number since 2019. And Border Patrol held over 5,700 kids in its custody. The surge quickly overwhelmed border facilities, leading to inhumane conditions that reportedly left kids sleeping on the floor, not seeing the sun, and waiting days for a shower. The Biden admin's response prompted criticism from both sides of the aisle. Now, the number of children in Border Patrol custody has fallen to 677 – an 88% drop in five weeks.

An all-hands-on-deck approach. FEMA helped convert convention centers, military sites, and camps into over a dozen shelters for children. HHS has called for federal volunteers to help process minors' cases. VP Kamala Harris is speaking to leaders of Mexico and Guatemala to address the root causes of immigration. And the Biden admin's more than quadrupling the refugee cap for the country. But only after getting backlash from Dems and human rights advocates for keeping the Trump admin's record low number. Some of the changes have helped to speed up children's cases and get them into HHS custody, where caseworkers have been working to place more than 22,500 kids with sponsors or family in the US. And there are other reunions taking place.

This week, four families separated by former President Trump's "zero tolerance" policy will be reunited. Among them, two moms – one from Honduras and another from Mexico – who haven't seen their kids in person since 2017. Trump's policy has separated about 5,500 children from their families. And about 1,000 of them are still not together. But the Biden admin's only made progress on four families out of the hundreds – months into the new admin. Homeland Security Secretary Alejandro Mayorkas said this week's reunions are "just the beginning." And the ACLU is pushing the Biden admin to locate hundreds of parents and create a pathway to citizenship for these families.

The situation at the border is seeing some relief. But the gov still has thousands of unaccompanied children in its care to place in homes. And hundreds of families to reunite.

PS: We've been tracking Biden's campaign promises on immigration and other issues. Check it out.

Andrew Brown Jr. Yesterday, the 42-year-old Black man's family and others gathered in Elizabeth City, North Carolina, to remember his life and call for justice. Last month, sheriff's deputies shot and killed Brown as he tried to drive away when police went to serve a search warrant at his home. According to an independent autopsy, Brown was shot four times in the arm and once in the back of his head. Body cam footage of the shooting has yet to be released publicly after a judge ordered a hold until the NC State Bureau of Investigation finishes its inquiry. The FBI opened a civil rights investigation. But civil rights advocate Rev. Al Sharpton, who gave the eulogy, called for the video to be released. Brown's son, Jha'rod Ferebee, remembered his father as his best friend. RIP.

Mexico City. Last night, an overpass carrying a subway train collapsed there, killing at least 23 people and injuring 65 others. Seven people are in serious condition. The city's mayor said a "support beam gave way" and caused a subway car to plunge toward a busy boulevard. The collapse happened on the city's newest subway line, which has raised structural concerns in the past. In 2013, officials shut down part of the line so the tracks could be fixed. Now, the Mexico City Attorney General's Office has reportedly started an investigation into the deadly accident.

What's got climate change on the mind...

The EPA. Yesterday, it proposed a rule to curb hydrofluorocarbons (HFCs) – powerful greenhouse gases typically found in AC units and fridges. HFCs were thought to be better than the alternative, but they're actually thousands of times stronger than carbon dioxide at warming the Earth. So the EPA's proposing a rule to cut down production and use of HFCs after Congress agreed last year to cut all pollutants down by 85% by 2036. Critics say the rule could add up in costs as businesses shell out to update their appliances. Supporters say companies have already been transitioning out of HFCs – and that the change will help US companies remain competitive.

Verizon. Yesterday, it hung up on its media business, selling it for $5 billion to Apollo Global Management. It includes AOL and Yahoo, which Verizon recently bought for about just under a combined $9 billion in 2015 and 2017, respectively. But the sale isn't a complete dead line, since Verizon will still keep a 10% stake in the new company.

Whose foundational love story is coming to an end...

Bill and Melinda Gates'. Yesterday, the billionaire couple said they were divorcing after 27 years because they can no longer "grow together as a couple." While the details of the split aren't clear, the two will remain co-chairs and trustees of the $50 billion Bill and Melinda Gates Foundation.

PS: We spoke to Melinda Gates about her career back in 2019. Check it out.

Why Wakanda is truly forever...