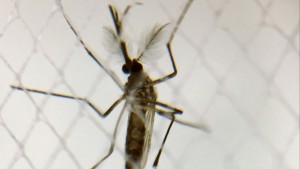 Don't swat away this story just yet. Mosquitoes are some of the deadliest animals in the world, infecting tens of millions of people with dengue, yellow fever, malaria, and Zika. Oxitec – a British biotech company – is trying to change that. As part of a pilot program, the company's releasing about 12,000 genetically modified mosquitoes a week in the Florida Keys over the next 12 weeks. The goal is for these 'GMMs' to eventually kill off disease-carrying mosquitoes, like the Aedes aegypti.

How does it work?

A killer gene. Since female Aedes aegypti are the ones that bite humans and spread diseases, Oxitec created male Aedes aegypti with a gene that kills them off. Once the two mate, the gene is passed on to their offspring, killing the young females before reaching adulthood. These male mosquitoes can also glow under a special red light – making them easily identifiable by scientists, while keeping the killer gene lineage going. Eventually, the Aedes aegypti mosquito population would die. But not everyone's buzzing about the news.

This experiment – considered an alternative 'insecticide' – has had about a 90% success rate in countries like Brazil and Malaysia, according to the company. But it's taken Oxitec a decade to get a stamp of approval from US regulators. Some scientists are eager to see if it works but others worry the mosquitoes could lead to an increase in antibiotic-resistant bacteria. And Keys residents have been protesting the experiment (billboards and all) over concerns it could harm the Florida ecosystem.

Technology is rad. Mosquitoes, not so much. Now, Florida's looking to eliminate a species of mosquitoes altogether. And depending on its success, it could help curtail the spread of mosquito-borne diseases.

What's telling the LGBTQ+ community 'I see you'...

Where the sirens are going off...

Jerusalem and Gaza. For weeks, tensions between Israelis and Palestinians have been boiling over the possible evictions of Palestinian families in East Jerusalem. Yesterday, amid an Israeli national holiday, some Palestinians threw stones at Israeli police from within the Al-Aqsa Mosque compound. The police then entered the compound – Islam's third holiest site – firing tear gas, rubber bullets, and stun grenades. The clashes left hundreds of Palestinians and more than a dozen Israeli police officers injured. Things escalated from there. Hamas fired dozens of rockets from Gaza into Israel, including six as far as Jerusalem. Israel retaliated with airstrikes into Gaza, by one count killing at least 20 people – including nine children. The UN is calling for an end to the violence. But fighting between both sides has continued into today.

What could be better than summer camp...

Getting vaccinated. Yesterday, Pfizer's COVID-19 vaccine got FDA approval for emergency use in children ages 12-15. The vax is expected to go to 'science court' tomorrow, where the CDC will decide whether to give it the green light. While kids have largely been spared from serious coronavirus symptoms, getting millions more Americans access to a vaccine could give the US a better shot at reaching herd immunity.

The Golden Globes. Yesterday, NBC said it won't air the show next year amid criticism that its organizer (hi, Hollywood Foreign Press Association) has no Black members. The HFPA says change is a "top priority." But Hollywood is tired of waiting.

Facebook. Yesterday, 44 US attorneys general called on the social media giant to stop its plans for a kid-version of Instagram because it could affect their developmental health. Facebook says 'kids are online anyway' and that it's working with child experts on the new platform.

Where every vaccination Counts...