Daily Skimm: Wind Turbines, Israel and Gaza, and Women in the Media 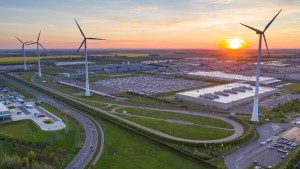 So are we. Yesterday, the Biden administration approved the first-ever large-scale offshore wind farm in the US. The project, dubbed Vineyard Wind, aims to install 84 wind turbines 12 nautical miles off the coast of Martha's Vineyard and Nantucket, Massachusetts. The whole thing is expected to take about two years before it's operational, cost $2.8 billion dollars, and create nearly 3,600 jobs. And the turbines could power 400,000 houses every year.

So is the Earth. The move brings the US one step closer to shifting toward renewable energy – something we are way behind on. Think: there are currently only seven offshore turbines in the entire country. And Europe's got 5,000+. This project has been decades in the making – suffering delays in funding and objections from the previous admin. But President Biden's promising to speed things up – especially since he hopes to get the US to net-zero emissions by 2050. Now, all of this could help the US produce over 30,000 megawatts of electricity by 2030. And cut down the country's dependence on fossil fuels.

Maybe. But not everyone is celebrating the move. Fishermen are worried that the turbines would make it dangerous for them to do their jobs and would cut off access to fishing in those areas. Environmentalists are concerned that the numerous wind machines could kill birds and negatively impact wildlife habitats. So far, developers have reportedly agreed to pay $37.7 million to commercial fishermen in MA and RI to cover their future losses. But many aren't taking the bait.

Biden's wind project marks a historic upgrade for the US energy sector. And it's just the beginning, as turbines could start sprouting along the coast from Maine to North Carolina. But some think the fan-fare isn't all it's cracked up to be.

Israel and Gaza. Today, violence between Israelis and Palestinians continued. Tensions have been high for weeks over the potential evictions of Palestinian families from East Jerusalem. After Israeli police stormed the Al-Aqsa Mosque compound – Islam's third holiest site – during Ramadan, Hamas responded with rockets. Now, both sides are trading near-constant airstrikes. Yesterday, Israel struck a high-rise building in Gaza it said was housing Hamas militants after reportedly warning civilians to evacuate. Hamas launched hundreds of rockets at Israeli cities. Many were intercepted by Israel's Iron Dome defense system but some reached coastal Israeli cities, killing three people. Meanwhile, Gaza health officials say a total of 43 Palestinians – including at least 12 children – have been killed. And UN officials fear things are heading toward a "full-scale war."

Rep. Liz Cheney (R-WY). Today, House Republicans will vote on whether to remove her as the House Republican Conference Chair (aka the no. 3 GOP leader in the chamber). Cheney's been in the hot seat ever since she voted to impeach then-President Trump for his role in the Jan 6 Capitol riots. And has broken with many Republicans in condemning Trump – most recently saying she would not "sit back and watch in silence" while the GOP joins Trump's crusade "to undermine our democracy." Now, Republicans look set to boot her from the role. And could replace her with Rep. Elise Stefanik (R-NY), who's defended Trump throughout his impeachments.

China. Yesterday, it reported the slowest population growth in a decade. China is the most populated country in the world. But its former one-child policy and the rising costs of raising children could push it to lose that title to India. Economists warn that there aren't enough workers to subsidize older generations in China. And that a shrinking population could complicate China's vision for economic dominance. Meanwhile, China's Communist leaders are apparently looking at raising the retirement age to better meet labor demands.

Who's driving off into the sunset together…

The Biden admin, Uber, and Lyft. Yesterday, the White House announced it was partnering with the ride-sharing companies to provide free rides for all Americans to vaccination sites. Vroom.