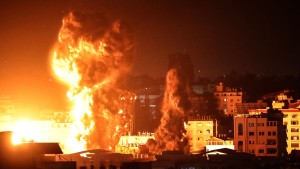 All eyes are on the Middle East.

Give me a recap.

The recent conflict between Israelis and Palestinians has been ongoing for a week now. Over the weekend, things got worse. Hamas – the Palestinian militant group that runs Gaza – launched over 100 rockets into Israel (most were intercepted by its Iron Dome). And Israel fired right back. Yesterday, Israeli airstrikes killed at least 42 Palestinians in Gaza. It was already the deadliest day of the conflict so far. But Israel struck again with fighter jets targeting the Gaza Strip. The conflict's also affected the media.

On Saturday, Israeli forces bombed a high-rise building that held offices for The Associated Press, Al-Jazeera, and others. While journalists received a warning before the strike, outlets' pleas for Israel not to attack were moot as forces claimed Hamas assets were in the building. At least one Palestinian journalist was reportedly injured. The AP and press freedom groups condemned the strike, calling it an evident attempt at censorship. Al-Jazeera added it was an attack on journalists' "duty to inform the world."

The UN Security Council met to discuss the "devastating cycles of violence" and said it was working with both sides for an immediate cease-fire. But Israel says it'll keep attacking "with full force." Human Rights Watch has accused Israel of "apartheid and persecution" against Palestinians. And the International Criminal Court is monitoring potential war crimes from both sides. Meanwhile, the US seems to be divided on the issue. President Biden has stood behind Israel and its right to defend itself from Hamas' rocket attacks. And some Democrats are standing by Palestinians.

The recent conflict has killed over 200 people – a majority of them Palestinians, including many children. And the world is watching as civilians on both sides continue to be the victims of leaders who refuse to stand down.

Where red tape is getting in the way…

India. Since March, the second-most populous country has been battling a second wave of COVID-19 that's left medical oxygen and hospital beds in short supply. In total, India's seen over 24 million coronavirus cases and more than 266,000 deaths. The Indian diaspora, international charities, and Hollywood have banded together in support, raising millions of dollars. But changes to a national law (approved last September) have made it difficult for local Indian orgs to receive that money. Now, NGOs reportedly need affidavits, notary stamps, and an account in the gov-owned bank in order to accept international donations – all of which the Indian gov says help keep tabs on foreign funds. But it's leaving critical aid in limbo at a time when India needs it most.

PS: Here's how India's COVID-19 outbreak is affecting the rest of the world.

Who's officially in the upper ranks…

Rep. Elise Stefanik (R-NY). On Friday, she became the House Republican Conference Chair (aka the No. 3 GOP leader in the chamber). She is replacing Rep. Liz Cheney (R-WY), who got booted by House Republicans for not falling in line with the party's support of former President Trump. Now, Stefanik says the GOP is "united" again. And will work with Trump to win back the House in next year's midterm elections.

Who doesn't know what to do with their masks...

Americans. There's been quite the confusion ever since the CDC announced fully-vaxxed people could leave their masks at home (with a few exceptions). While some are breathing in the spring air mask-free, others are glad they kept that back-up mask in the bottom of their bag. That's because some states, cities, and retailers still require them. The country's largest nurses union condemned the new guidance, saying it puts them and others at risk of the virus. But the CDC's still defending its decision, saying it's based on new data showing vaccines are working. But reminded everyone to follow local gov rules.

What's worse than the Sunday scaries...

Tax Day. Yep, that's today – the last day to file your 2020 taxes. And if your Monday's too packed to pull out the calculator, learn how to file an extension here.

Psst...if you're expecting a tax refund, here are a few smart ways to use it.

The Basketball Hall of Fame.