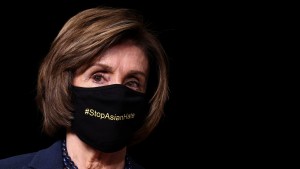 The COVID-19 Hate Crimes Act is on its way to President Biden's desk.

The US has a long history of discrimination against the Asian American and Pacific Islander community. The bill, passed by both chambers of Congress, came in response to the rise in hate crimes against the AAPI community during the pandemic. In many major US cities, anti-Asian hate crimes rose nearly 150%. And a report from Stop AAPI Hate found that there have been more than 6,600 hate-related incidents between March 2020 and March 2021. A few months ago, a gunman killed eight people – including six women of Asian descent – in the Atlanta area. And attacks against Asian Americans in broad daylight keep happening. Now, the government is taking action.

What's in the bill?

The COVID-19 Hate Crimes Act would order the Justice Dept to put hate crimes at the top of its review list – especially those against Asian Americans. And would provide local law enforcement agencies with more resources to better document this type of violence. It would also call on HHS to work with communities to raise awareness of hate crimes against the AAPI community, especially about COVID-19. And would set up an online reporting system – which could help victims coming forward. President Biden is expected to sign it into law later this week.

In a bipartisan agreement, most House Republicans supported it after behind-the-scenes negotiations. Rep. Grace Meng (D-NY), who helped introduce the bill, said that the Asian American community hasn't just been dealing with a pandemic – they've also faced "the virus of hate and bigotry." But over 100 Asian and LGBTQ+ groups have questioned whether the law would change the root problem of this hate. And are worried additional reporting wouldn't be enough to prevent the ongoing violence.

Racism against Asian Americans is nothing new in the US. But as calls to support the AAPI community and "Stop Asian Hate" have grown louder over the past few months, the government is finally taking a major step to do the same.

PS: We spoke to Stop AAPI Hate co-founder Manjusha Kulkarni about the org's impact following unprecedented surges in hate against the AAPI community throughout the pandemic.

Andrew Brown Jr. Yesterday, a prosecutor said three sheriff's deputies in Elizabeth City, North Carolina, won't face charges for shooting and killing the 42-year-old Black man. Last month, deputies tried to serve warrants at Brown's home. But they shot Brown multiple times as he tried to flee the scene in his car, killing him. His death came less than 24 hours after Derek Chauvin was convicted for George Floyd's murder. And prompted days of protests calling for justice. After reviewing body cam footage, the DA said the shooting was "justified," and claimed Brown used his car as a weapon, putting deputies in danger. But Brown's family says 'that's not true' and is calling Brown's death an "execution." And want the Justice Dept to get involved. Now, the decision's sparked new protests calling for change.

Skimm More: We explain why police convictions are rare.

The WHO. Earlier this week, it revealed that clocking in too many hours at work is killing hundreds of thousands of people a year worldwide. The first-of-its-kind analysis looked at data from 194 countries from 2000 to 2016. And found that working 55+ hours/week led to an increased risk of stroke and heart disease. The org says working from home during the pandemic probably isn't helping either. So take this as your cue to use your PTO.

PS: Another possible side effect of overworking: burnout. Maybe you're feeling that right now. We called up a psychologist to help.

Who's giving a health update...

Medical experts. A US task force says all adults should get screened for colorectal cancer starting at age 45 – five years earlier than the current guidance. That's because more and more younger people are getting diagnosed with it – and it's the third-leading cause of all US cancer deaths.

Who will be found on the big screen…