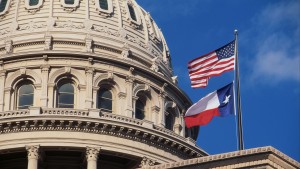 Texas is going big on handguns.

Yes, well. The Lone Star State has over 1.6 million active handgun license holders. Over the last decade, it's made it easier for Texans to arm up – like allowing rifles without licenses in public and cutting costs and training requirements for permits. The state already has some of the loosest gun laws in the US. But now, it's going a step further. This week, the Republican-controlled legislature approved a bill that'll allow anyone over 21 (except convicted criminals and felons) to carry a handgun in public without a permit. Gov. Greg Abbott (R) is set to sign it into law. But not everyone is on board.

Supporters – including the embattled NRA – refer to this bill as "constitutional carry" and point to the right to bear arms under the Second Amendment. They also argue that removing permit requirements would help people better defend themselves in public. But there are many critics – including Texas law enforcement. Police say it would put them and the public at risk, especially since the state doesn't require background checks for private sales. Gun control advocates also point to the Sutherland Springs church shooting (where 26 people were killed) and the recent El Paso Walmart shooting (where 23 were killed). Meanwhile, some of Texas's new covid transplants may be saying 'we're not in California anymore.'

What do you mean by that?

For several years now, tens of thousands of Americans from liberal states (like CA) have moved to Texas in search of greener (read: bigger and cheaper) pastures. And companies have either moved their HQs or made plans to relocate there. But the slew of conservative efforts pushed through by the legislature may have them doing a double take. First, Abbott banned gov agencies from requiring face masks, threatening cities and officials with fines if they didn't cooperate. Then, the governor signed the heartbeat bill into law – one of the most restrictive abortion measures in the country. The state gov is also working on banning schools from requiring lessons on critical race theory and limiting transgender kids in sports and from accessing gender-affirming health care.

Texas is poised to become the latest (and largest) state with a "constitutional carry" law. And it comes as many are calling for gun control amid a growing number of mass shootings in the US.

Who's got an update on office space...

Sec of State Antony Blinken. Yesterday, he announced the US would reopen its consulate in Jerusalem. Reminder: In 2018, the Trump admin moved its embassy from Tel Aviv to Jerusalem. It was a move that Israelis welcomed as recognition of Jerusalem as their capital, but one that angered Palestinians who claim the city as part of a future state. The next year, the US merged its Jerusalem consulate into the embassy to "increase the efficiency and effectiveness" of diplomatic relations. But the office had been a major means of communication between the US and Palestinians. Now, Blinken – who's in the area to help enforce a ceasefire – wants to reestablish the consulate as a separate office. The goal: for the US to use that space to improve communication with Palestinian authorities and better provide aid. It's unclear when this will happen but Israeli officials need to sign off.

Thing to Know: Consulate v embassy. An embassy – a country's main HQ for diplomacy – typically goes in another country's capital. But there can be multiple consulates (think: branches of the embassy)

Florida Gov. Ron DeSantis (R). This week, he signed a bill that gives Florida the power to fine social media companies if they ban or suspend political candidates from their platforms. Remember when Facebook, Twitter, and YouTube blocked former President Trump after the Jan 6 Capitol attack? Well, DeSantis is saying 'not in my house' and cracking down on Big Tech censorship. But Silicon Valley isn't hitting the 'like' button. And tech companies and critics are raising First Amendment concerns and say that it gives the gov too much power over online speech. The fight between Big Tech and Republicans could be going viral with more states possibly following suit.

What'll have doctors stocking up on post-visit lollipops...

Moderna. Yesterday, the biotech company said its COVID-19 vaccine is 100% effective among kids ages 12 to 17. After a lengthy study, Moderna found no major safety concerns and said headaches, fatigue, and chills were the most common side effects. Now, Moderna's two-dose shot could be the second option for kids in the US as young as 12 (after Pfizer). But before 'Team Pfizer or Team Moderna' becomes the talk of recess, the FDA's gotta approve it.

The New York Daily News. The newspaper is getting slammed after publishing a cartoon this week portraying NYC mayoral candidate Andrew Yang as a tourist. Yang has lived in NYC for 25 years. And the move happened on one of the last days of AAPI Heritage Month, amid a wave of anti-Asian hate crimes. The Daily News defended itself, saying the cartoon is a "comment" on Yang's lack of NYC knowledge, not his race. Yang's wife called the portrayal a "racist disfiguration."