Daily Skimm: Juneteenth, SCOTUS Rulings, and the VS Collective 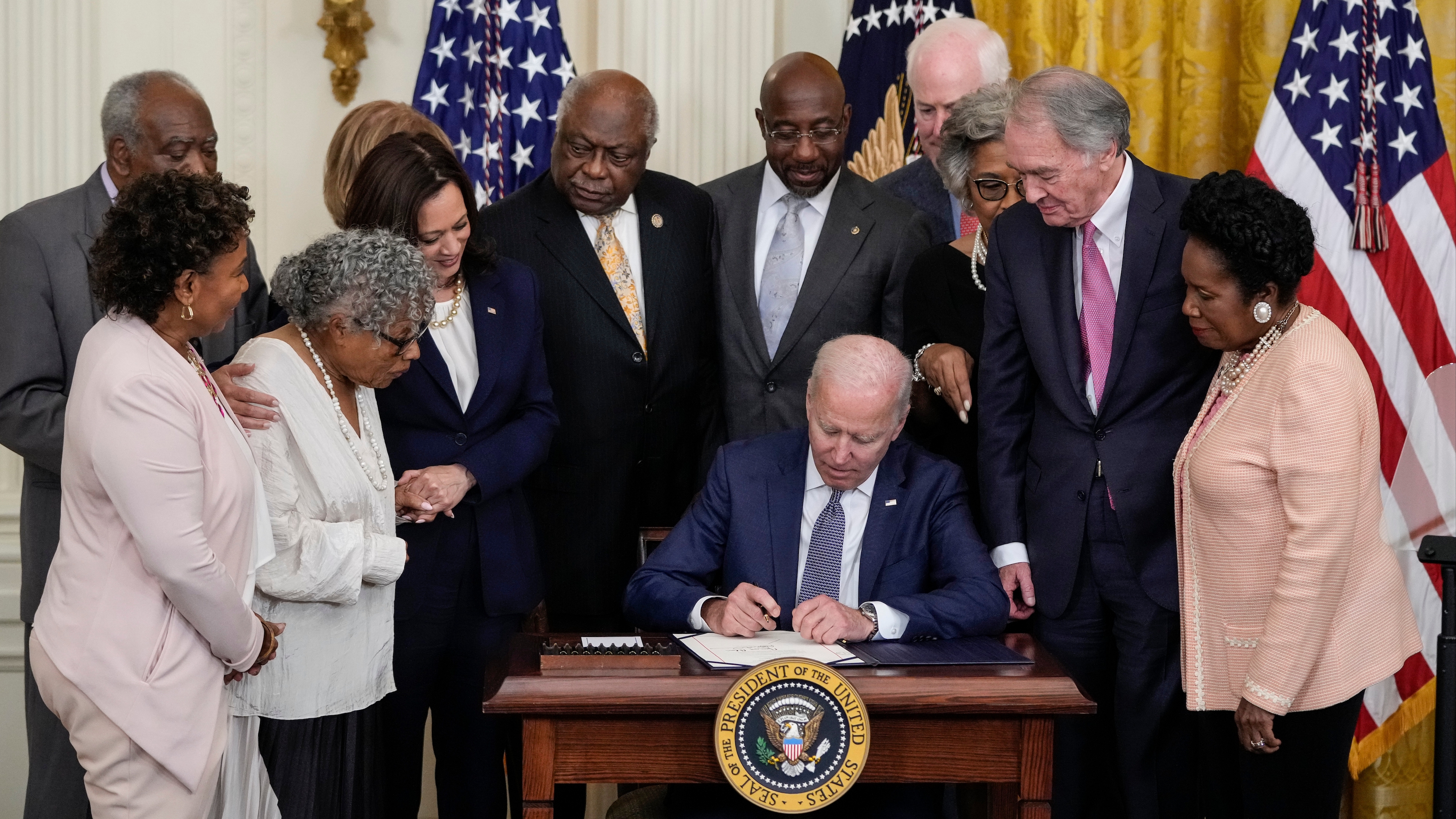 Juneteenth is officially a federal holiday.

On June 19, 1865, news of the Emancipation Proclamation finally began to reach enslaved people in Texas – more than two years after President Lincoln signed it. Black Americans have long honored Juneteenth. And until this week, 48 states and DC recognized it but only four (TX, NY, VA, WA) gave state employees the day off. Now, after a unanimous vote in the Senate and a less unanimous vote in the House, President Biden signed Juneteenth into law. It's the US's 11th federal holiday and the first since MLK Day was added in 1983. And since Juneteenth this year falls on a weekend (tomorrow), it will be observed today, with 2 million federal employees getting a last-minute day off. But while Juneteenth is a day to celebrate, there's still a lot of progress to be made. Looking at you...

States...The US doesn't have any federal requirements for teaching Black history, leaving it in the hands of states, schools, or teachers. So far, more than a dozen states intro'd or passed bills to ban critical race theory – which explores the idea that systemic racism is present in US history and institutions. And a number of GOP-led states have introduced and passed bills to restrict voting rights including shortening the early voting period, reducing ballot drop boxes, and adding more requirements for absentee ballots – disproportionately impacting Black and minority voters.

The fed gov...The Biden admin is also struggling to make moves. Senate Dems are pushing for a sweeping voting rights legislation, but they haven't made any progress. Biden also failed to pass the George Floyd Justice in Policing Act by his May 25 deadline. And Sen. Rand Paul (R-KY) is holding up a bill that would make lynching a federal hate crime because it might "conflate lesser crimes with lynching." Let's not forget the delay on the $20 Harriet Tubman bill either.

Bank accounts…Because of systemic racism in housing, education, and employment, many Black families' wealth has been stalled for decades. The average wealth of a white family is at least seven times more than that of a Black family. And it's even worse for Black women. There also hasn't been much progress on reparations. But Evanston, Illinois, became the first US city to make it available to its Black residents. And California launched a task force to study and recommend reparations.

Making Juneteenth an official federal holiday is a step in the right direction. But Black Americans are still being left behind as lawmakers find common ground on symbolic moves rather than actual change.

Now that Juneteenth is officially a federal holiday, here are some ways to honor it:

The Affordable Care Act. Yesterday, the Supreme Court threw out a lawsuit challenging the health care law for a third time. It all stems from the individual mandate – part of the ACA that requires everyone to have health insurance, or pay a penalty. In 2017, Congress set that penalty to $0 – basically nullifying the mandate. And since the mandate was a key reason SCOTUS greenlighted the law in the first place, Texas and 17 other Republican-led states sued, arguing that without the mandate the law was unconstitutional. Now, the Supremes are passing on the case, saying the $0 penalty doesn't hurt the states – which means health care stays in place for nearly 31 million Americans. President Biden said it's time to "keep building" on the law and expand health care to more people. Some Republicans are going back to the drawing board to try to enact health care policy changes in Congress.

Same-sex adoption. Yesterday, the high court ruled local govs have to work with foster care agencies even if they reject same-sex couples. In 2018, city officials in Philadelphia learned that Catholic Social Services (CSS) wouldn't consider gay couples for adoption. So they stopped placing children with the agency. CSS sued, citing the First Amendment right to freedom of religion. Now, the Supremes agree, saying religion can be an exception. It's the latest ruling upholding religious freedoms. And comes during Pride Month. A Philadelphia city official called the ruling a "difficult and disappointing setback." And LGBTQ+ advocates said it was a defeat in the fight for equality.

What's got plans for your medicine cabinet…

The Biden admin. Yesterday, it announced a $3.2 billion plan to develop antiviral pills for COVID-19 and other illnesses. While people get antibiotics for all sorts of reasons (hi, gross pink eye), it's much harder to develop a pill to fight viral infections. Enter, America's checkbook. Last year, the Trump admin's Operation Warp Speed promised to pay up if big pharma developed COVID-19 vaccines. Spoiler alert: that panned out. Now, the Biden admin wants to use the same playbook to get companies to invest in antiviral pills to treat COVID-19, the flu, other viral illnesses. The goal: hedge our bets on COVID-19, give the vaccine hesitant something to be not-so-hesitant about, and prep for the next viral problem. But antivirals are hard to get right – and it's still unclear if this initiative will succeed.

What scientists haven't ironed out…

Wrinkles. A study this week revealed that it's probably impossible to stop aging. By looking at a ton of data on other species, scientists decided that even as life expectancy grows, the (upper) limit for humans probably does exist. Womp womp.

What's (finally) getting on board...