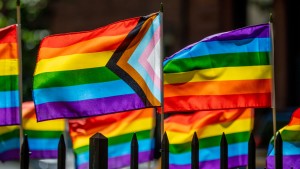 LGBTQ+ Rights Around the World

While many countries are celebrating Pride Month, some are setting up roadblocks.

Give me the good news first.

For years, people have celebrated Pride across the globe – doing things like waving flags, marching, and pushing for legislative change. And parts of the world seem to be turning a corner. Northern Ireland and Costa Rica legalized same-sex marriage last year. Thailand, Japan, and Switzerland could soon too. The EU established itself as an "LGBTIQ Freedom Zone" to protect the fundamental rights of LGBTQ+ people. And Canada's gov is hoping to criminalize conversion therapy – something UN officials say can amount to torture. But gay and transgender people don't always get to experience the same protections in some countries.

Tell me what you know.

Some governments are showing their true colors. Hungary's been passing legislation that cracks down on the LGBTQ+ community (see this and this). The latest: making it illegal to show minors content that 'promotes' homosexuality. In Poland, several towns declared themselves "LGBT-free zones." And at least 69 countries still criminalize same-sex relations. In the US, some states intro'd (or passed) bills that stop gender-affirming medical care for trans youth or forbid trans children from playing on sports teams. And 2021 is on track to be the deadliest year for trans people yet.

A few things. In the US, the House passed the Equality Act that would ban sexual orientation and gender identity discrimination. Athletes and celebrities have also come out as members of the LGBTQ+ community. The Biden admin could be the most LGBTQ+ inclusive in history. And the number of Americans who support gay marriage has reached 70% for the first time. While that number's on par with other countries' views (like Italy, Philippines, or Mexico), there are dozens of others (including India, Kenya, and Russia) that need to catch up. And the UN is urging change.

The LGBTQ+ community has seen some progress. But there's still a lot left to achieve as states and countries continue to push restrictive legislation that hurts an entire group and adds to queer stigma.

President Biden. Yesterday, he announced a new plan to tackle gun violence. Last year, homicide rates reportedly rose 30% compared to the year before. Gun violence specifically also saw a rise. Things like pandemic stress, economic hardship, and pushback against police have factored into the rising crime rate. Now, Biden says the trend could continue as the country fully reopens this summer. And pledged a "zero tolerance" crackdown on gun dealers who break the law. He's also opening up federal aid for communities to boost their law enforcement. And to expand summer programs to keep youth out of trouble as well as help people find jobs. But Republicans have criticized Democrats for the rise in crime, linking it to calls for defunding the police.

The Supreme Court. Yesterday, it ruled that a Pennsylvania school district violated a student's First Amendment rights. In May 2017, 14-year-old freshman Brandi Levy posted a Snapchat full of 'f*cks' after she didn't make the varsity cheerleading squad. It was sent to 250 people. And a screenshot was shared with school officials. The school suspended Levy from cheerleading for a year, saying it was apparently to help promote a healthy "teamlike environment." But Levy sued, saying they had no right. The Supremes agreed, reminding schools that students don't lose their constitutional rights "at the schoolhouse gate.

Who found her voice...

Britney Spears. Yesterday, she pleaded with a Los Angeles judge to end her court-ordered conservatorship. Since an apparent mental health crisis in 2008, Spears' dad has controlled much of her personal life and career (think: restricting visitors, negotiating business deals, and overseeing medical decisions). In response, fans have launched the #FreeBritney movement, expressing concerns over the singer's well-being. Spears had reportedly voiced concerns about the conservatorship for years. But she'd mostly stayed silent on it in public. That changed when she took the mic yesterday on:

The CDC. Yesterday, it said there's a "likely association" between rare heart inflammation and some COVID-19 vaccines. The health agency reviewed hundreds of cases among teens and young adults who received the Pfizer or Moderna vaccines. And suffered from symptoms like chest pain, trouble breathing, and heart palpitations. The majority have recovered. But the CDC's saying 'we're looking into it.' Now, the FDA says it'll add a warning to the Pfizer and Moderna vaccines about the rare heart condition. But health experts want people to know that the benefits of getting vaccinated outweigh the risks.

While New York City's still waiting for the votes to come in...

California's also heading to the polls.

What happens to be disproportionately white...

While this vet is getting some overdue respect...

So is Alan Turing.