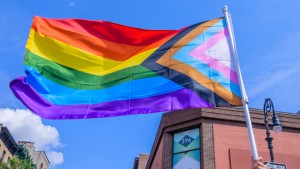 It's the end of Pride Month, and there are a few things to celebrate.

You're not the only one. 70% of Americans support same-sex marriage. And 5.6% of American adults identify as LGBT. The country could be seeing the most LGBTQ+ inclusive admin in US history, including the first openly transgender official confirmed by the Senate (hi, Dr. Rachel Levine). By one count, 981 elected officials nationwide are members of the LGBTQ+ community. This week, SCOTUS handed the LGBTQ+ community a win. We're (finally) seeing an openly transgender woman compete at the Miss USA pageant. Starting tomorrow, Wisconsin will have gender-neutral options for parents on birth certificates. New York will let people use a non-binary sex designation on their state driver's licenses. And California's sending a message to states with anti-LGBTQ+ laws.

It is. But progress hasn't been linear. 2021 broke records for the most anti-trans bills introduced (over 100) – some of which have become law. Arkansas and Tennessee banned gender-affirming treatments for trans youth. Alabama, Mississippi, and Florida banned trans athletes from competing in female sports teams at public schools. SCOTUS sided with a Catholic adoption agency that wouldn't work with same-sex foster parents. Sexually active gay and bisexual men face restrictions to donate blood in the US. This year is on track to be the deadliest year for trans people yet – especially for Black transwomen. And LGBTQ+ activists are calling out companies (like CVS, Walmart, AT&T) for using Pride Month as a front for their support of the LGBTQ+ community when their internal policies say otherwise – aka rainbow-washing.

You can: Call your elected officials and encourage them to take action on LGBTQ+ rights bills. Talk to your HR department and ask what they're doing to protect LGBTQ+ employees. Donate to orgs like The Trevor Project, National Queer Asian Pacific Islander Alliance (NQAPIA), Human Rights Campaign, GLAAD, and the Matthew Shepard Foundation. Volunteer at local LGBTQ+ community centers. Get educated on queer stigma. And dedicate yourself to being an ally and creating an inclusive atmosphere (like sharing your gender pronouns).

Pride Month may be coming to an end, but for a community that's been fighting for civil rights for decades, peer support is needed 365 days a year.

Where the search continues...

Florida. Search and rescue teams have been working tirelessly to find survivors after a section of a condo in Surfside, FL, collapsed last week. The death toll is now at 12 and 149 are still unaccounted for. Crews and officials say they're still holding out hope they'll find survivors. The federal gov is reportedly investigating the cause – which is still unknown. And President Biden and first lady Jill Biden are planning to visit the site of the collapse and meet with families tomorrow.

Who could be going to the 'big house'...

Jacob Zuma. Yesterday, South Africa's highest court sentenced the country's former president to 15 months in jail. Zuma led South Africa from 2009 to 2018. His tenure was racked with corruption allegations over scandals ranging from multi-million-dollar upgrades to his private home to reportedly accepting bribes from a French defense firm when he was deputy president. And investigators took note. But Zuma defied court orders to appear at an inquiry and answer questions. Now, the court is saying he's guilty of contempt. Zuma has less than five days to turn himself in or police will detain him.

United Airlines. Yesterday, the company announced it's buying 270 new planes – the airline's biggest purchase and the largest from any airline carrier in the past decade. UA also shared plans to create 25,000 more jobs by 2026. It's a big rebound for the company after a turbulent year for airlines. But with demand for travel picking up, UA's hoping to stay aflight.

Who everyone's rooting for...

Randy Moore. Next month, he'll be the first African American to lead the US Forest Service in its 116-year history.

Who said 'cheese' for Vogue…