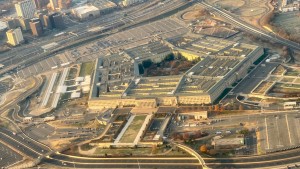 The Pentagon's force is no longer with Microsoft.

Yesterday, the Pentagon announced it canceled its cloud-computing contract with Microsoft – aka the Joint Enterprise Defense Infrastructure (JEDI). In 2019, the tech company beat out Amazon, IBM, Oracle, and Google to win the $10 billion contract. It would've helped the Defense Dept update its cloud-computing systems, store lots of classified data, and ramp up its AI game. Important, as the US tries to compete with China. And necessary, since portions of the military reportedly still use computer systems from the '80s and '90s – costing the Defense Dept billions. But Amazon sued, claiming then-President Trump's rocky relationship with former CEO Jeff Bezos (who also owns The Washington Post) cost them the deal. Now, the Pentagon's going (Han) Solo...for now.

So does this mean Amazon (Obi)won?

No. The Pentagon did a lot of introspection during the pandemic and decided to go in a different direction. So it said 'goodbye' to the (last) JEDI. And 'hello' to Joint Warfighter Cloud Capability (JWCC). It will allow multiple companies to join in on (and share) the cloud project. The OGs Microsoft and Amazon will get the first shot at securing the deal – which is expected to last up to five years and to be worth billions. But other companies, like Oracle, could also qualify. This comes as the US continues to struggle with its cybersecurity. And as officials warn of growing cyber threats to US infrastructure.

The race is on for tech companies. But the US military's tech seems to be stuck in the stone age amid cybersecurity threats and constant hackings. And it's up to the DOD to protect the country.

Israel's citizenship law. Yesterday, PM Naftali Bennett's gov failed in its effort to extend a controversial citizenship law for the first time since 2003. The law banned Palestinians in the West Bank or Gaza married to Israeli citizens from getting citizenship or residency. Supporters said the law would help protect national security and the Jewish state. Critics called it a racist policy that divides families. The bill requires a simple majority in Parliament for renewal every year. But yesterday, far-right leader Bennett couldn't bring his coalition gov to seal the deal. That's in part because members of former PM Benjamin Netanyahu's Likud party broke with their previous support of the law and voted against it. The goal? To embarrass Bennett.

Where history's being made…

Canada. Yesterday, PM Justin Trudeau named Inuk leader Mary Simon as governor general. She will be the first ever Indigenous person to take on that role. She'll represent Queen Elizabeth II in Canada and will outrank Trudeau. Her appointment comes as Canada faces its dark history of systemic abuse of Indigenous communities. Since May, Indigenous peoples have discovered about 1,000 unmarked graves at former residential schools often run by the Catholic Church. Now, Trudeau says Simon will help "build a brighter tomorrow." Simon called her appointment "an important step forward" toward reconciliation.

Who's officially not on the roster…

Sha'Carri Richardson. Yesterday, the US's track and field team chose not to send the running star to the Tokyo Olympics. Last week, the US's anti-doping agency suspended Richardson for one month and disqualified her from the 100-meter race after she tested positive for marijuana. (Richardson apologized and said she used it after the death of her mother.) The US team could still have let her run in an Olympic relay race set to begin after her suspension. But it chose not to, saying that doing so would take a hit on its credibility for enforcing rules.

Eric Adams. Yesterday, the former police captain and Brooklyn borough president won the Democratic primary for NYC mayor. Now, he's the favorite to win the general election in November, which would make him the city's second Black mayor.

Whose class will probably have a waitlist...

What may help college students with their hangovers...