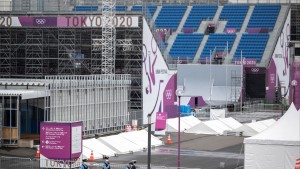 There won't be fans at the Tokyo Olympics.

It's not. The pandemic has hit the Olympic Games hard. First, officials pushed the event back an entire year. Then, they put a cap on the number of spectators. But the Games are having trouble setting sail – just two weeks before the Olympic cauldron's lit. Yesterday, Japan declared a state of emergency because of a rise in COVID-19 cases. Olympic organizers are now banning fans from Tokyo-area stadiums and arenas. The move could cost the gov hundreds of millions of dollars.

What about vaccines, though?

Athletes, journalists, and staff aren't required to be fully vaxxed to enter the country. Still, the International Olympic Committee estimated that about 80% of those sporting or reporting have gotten pricked. But only about 15% of Japan's population can say the same. Officials have blamed the slow rollout on a shortage of doctors and nurses. And because it needs to import all of its vaccines. Now, officials worry that letting fans attend could make things worse. Especially with delta (the more contagious variant) on the rise. Already, at least two members of the Ugandan team have tested positive for the delta variant upon arriving in Japan. And things aren't much better stateside.

Delta is already the dominant strain in the US. And vaccination rates are lagging. With summer tourism in full swing, White House health officials are reminding Americans that vaccines offer the best protection. Of all the people who died of COVID-19 last month, 99.2% were unvaccinated. With delta in the mix, some pharma companies are taking things up a notch. Pfizer and BioNTech are starting to develop a vaccine that'll target the specific variant. And have plans to get FDA approval for a booster shot (think: a third dose). That way, your antibodies can keep the pep in their step all summer long and beyond.

The Tokyo Games have had to jump several hurdles to get to this point. Now Japan's making changes two weeks before the opening ceremony. But it's got many wondering if we're jumping the gun on a return to normalcy.

What'll be entering a new chapter…

The US. Yesterday, President Biden put an Aug 31 end date on the nearly 20-year war in Afghanistan, days earlier than his original September 11 deadline. The US put boots on the ground after the 9/11 attacks to end the Taliban's rule and take down al-Qaeda. But America's longest war has claimed the lives of more than 2,300 US troops and and an estimated 35,000 or more Afghan civilians. Now, Biden said the US can't sacrifice any more American lives in an unwinnable war. He's called on Afghanistan's leaders to "come together" and move their country forward. The president added that the US will continue to provide assistance (think: billions of dollars in humanitarian aid). But critics say Afghanistan could fall into a civil war without a strong US presence.

The FDA. Yesterday, it signed off on a label change to a recently-approved Alzheimer's treatment (Aduhelm). It's the first Alzheimer's drug in nearly two decades – and the first approved medication to slow the illness. But health officials wanted more evidence that the drug actually worked – especially since the FDA was pretty quick to give it the okay without convincing data. Now, the FDA's in favor of clarifying some confusion about who the drug is for. And said it's only for mild- or early-stage Alzheimer's patients, but that it hasn't been tested in those with the advanced disease. The change means 1 or 2 million people could qualify for the medication, down from 6 million.

What came with more bad news…

The heat dome. Last week's extreme heat wave over western Canada is believed to have killed about 500 people and led to dozens of wildfires. And there's more: scientists say the high temps (think: over 120°F at times) likely also killed 1 billion marine animals – including mussels, starfish, and clams. They're also warning that the devastating effects to marine life could affect water quality – since shellfish do their part to keep things clean.

Who's flipping the Scripps...

Zaila Avant-garde. The 14-year-old just became the first Black American to win the Scripps National Spelling Bee in its 96-year history. She also happens to be a star basketball player, holding three Guinness World Records for dribbling. Can you spell 'prodigy'?

Thing to Know: Murraya. A genus of trees and the word Zaila spelled correctly to win her title. Use it in a sentence? Sure. The murr-aya learn about Zaila the murr-ay-am impressed

While you Marvel about "Black Widow"...