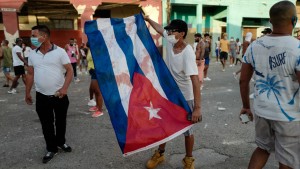 Ever since Fidel Castro's revolution more than 60 years ago, Cubans have been living under a communist government. Nearly 1 million people emigrated to the US, leaving the island and its troubles behind. Those who've stayed have dealt with oppression and economic instability – driven in part by US sanctions. The pandemic's impact on tourism hasn't helped. And the country's been seeing food and medicine shortages as well as rising inflation (which could reach at least 500% this year). Earlier this week, Cubans took to the streets in frustration, calling for an end to the communist gov. At least one person died during a clash between protesters and police. And 140 others have been arrested or reported missing. The US is paying close attention.

Where does the US stand on Cuba?

In 2016, President Obama became the first sitting US president to visit Cuba in 88 years. And called on Congress to lift the embargo put in place by JFK. He chipped away at years of sanctions. And eased travel restrictions for Americans, bringing economic opportunity to the island. But in 2017, President Trump hit 'undo' on the changes. On the campaign trail, then-candidate Joe Biden promised he'd "go back" to Obama-style relations. But once in office, the White House said Cuba wasn't on the president's priority list. Earlier this week, President Biden said he stands with the Cuban protesters. But many want him to do more.

It depends on who you ask. Republican lawmakers are calling on Biden to step up his support of protesters, including by providing satellite internet access to Cubans so they can share their messages to the world. Some – like Cuban-American Sen. Marco Rubio (R-FL) – are calling for the sanctions against "communist tyranny" to stay in place. House Dems want the opposite, including a reversal of Trump's sanctions. Sen. Bernie Sanders (I-VT) – who has praised parts of Cuba's regime – also called for an end to the embargo. But Cuban-American Sen. Bob Menendez (D-NJ) believes the Cuban regime's the one that needs to change. Meanwhile, advocacy groups are asking for the admin to send humanitarian assistance to the island.

Cuba's always been a policy challenge for the US. But decades of instability appear to be reaching a fever pitch. And many are waiting to see where Biden lands.

What's rolled out a greenprint...

The EU. Yesterday, the 27-nation bloc unveiled its plan to cut greenhouse gases by 55% from 1990 levels within nine years. How? By getting fit, so to speak. "Fit for 55" – the EU's plan – sets stricter emission limits to effectively ban petrol and diesel cars by 2035. It also taxes jet fuel and calls for a carbon tax for cement and steel importers. The EU reportedly contributes 8% to global emissions. And EU leaders are saying 'think of the children.' But the plan could face years of negotiations since the European Parliament and all 27 member states need to approve it. And coal-dependent countries (like Poland) and certain industries (airline) could be saying 'yeah, we're not into that.'

What's getting put on blast...

The FBI. Yesterday, the Justice Dept's inspector general released a scathing report detailing the FBI's failures in the Larry Nassar case. Hundreds of women and girls accused the former USA Gymnastics doctor of molesting them. And in 2018, a judge sentenced him to up to 175 years in prison after he pleaded guilty to 10 counts of sexual assault. Now, the report says agents not only disregarded allegations against Nassar in 2015, but lied to cover their mistakes. And that the "numerous and fundamental errors" allowed Nassar to continue his abuse for months. The FBI called its employees' actions "inexcusable." And said it'll work to ensure that it never happens again.

Overdoses. Yesterday, the CDC estimated that more than 93,000 people in the US died from drug overdoses last year – a record. It's a nearly 30% increase from the previous year. The US had been struggling with an opioid crisis long before the pandemic hit. Experts say the lockdowns only made things worse by further isolating and limiting access to treatments for those already battling addiction. One health official's reportedly calling for more accessible treatment options for people with substance use disorders.

If you or someone you know is battling substance use, call the National Helpline at 1-800-662-HELP (4357). Or locate your nearby treatment facility here.

Who's taken the mic again…

Britney Spears. Yesterday, she told a Los Angeles court that she wants to charge her dad with conservatorship abuse. Since 2008, Jamie Spears has controlled much of his daughter's career and personal life – sparking concerns among fans about her well-being. Last month, Spears said she's been barred from removing an IUD and forced to work against her will. Now, she's called for an investigation into her father's alleged abuses. And pleaded for her dad to be removed from the court-ordered conservatorship. The pop star called her situation "cruelty." Her father's lawyer said he has no intention of resigning as co-conservator. A judge allowed the singer to hire a new lawyer in the case. And another hearing has been scheduled for the end of September.

Her "little sister" is all moved in.