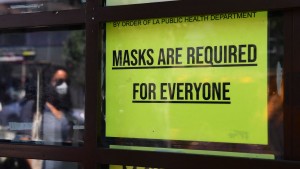 The US has a variant problem.

Earlier this month, the delta variant – the one first documented in India – became the dominant COVID-19 variant in the US. Now, it accounts for more than 80% of new cases. And the CDC's sounding the alarm. That's because delta is about 60% more contagious than the variant first found in the UK. And cases are up across the US.

They're still believed to be highly effective at preventing severe disease or hospitalization. Over 99% of those who died in the US last month from the virus were unvaccinated. The good news: roughly half of the US population is vaxxed. But many Americans are still hesitant. Some are concerned amid news of blood clots and autoimmune disorder risks. Others have been met with misinformation. Fox News, whose hosts have been accused of promoting skepticism about vaccines, is starting to take note. Host Sean Hannity recently announced he believes "in the science of vaccination." And pleaded with viewers to get pricked because "enough people have died."

Cases have been going up – a trend that does not look like it's going to change anytime soon. The WHO and CDC can't agree on messaging for whether vaccinated people should wear masks indoors. But LA County isn't taking chances: it's already reinstated an indoor mask mandate. Other places in the US are nudging people to mask up, even if they don't require it. The reason: delta is concerning. In India, a recent study found that the official COVID-19 death toll of more than 414,000 people could be a vast undercount. And that the real toll could be in the millions.

The US has made huge strides in combating the virus. But two big challenges – vaccine hesitancy and coronavirus variants – are converging, and threaten to put historic progress on hold.

Psst...If you're thinking of traveling this summer, here's how the delta variant could affect those plans.

Harvey Weinstein. Yesterday, the convicted rapist was extradited from New York to Los Angeles to face 11 more charges of sexual assault. In 2017, The New York Times and The New Yorker first reported allegations of sexual misconduct against the disgraced Hollywood producer. More than 80 women came forward with similar stories – reenergizing the #MeToo movement. Last year, an NYC judge sentenced Weinstein to 23 years in prison for rape and sexual assault. LA prosecutors said 'we have a case against him, too.' Weinstein could appear in court today for allegations he assaulted five women between 2004 and 2013. A trial is expected later this year. Weinstein, who maintains everything was "consensual," faces up to 140 years in prison.

The Bootleg Fire. The Oregon wildfire has been burning for two weeks – destroying at least 70 homes, dozens of buildings, and over 340,000 acres (about half the size of Rhode Island). It's the largest wildfire this year – fueled by last month's heat wave and prolonged drought. It's still only 30% contained. And is so intense it's creating its own weather patterns. Like thunderstorms and possible fire tornadoes – both of which complicate containment efforts. Local officials are pointing the finger at climate change.

Athletes wear shorts, shorts. Over the weekend, the Norwegian women's beach handball team wore shorts instead of bikini bottoms...and got fined over $1,700 for it. Organizers said they wore "improper clothing." But critics, including members of Norway's gov, called the requirement for them to wear bikini bottoms "sexist" and "ridiculous" – especially since the male players can wear long shorts and tanks. As if that wasn't enough, in comes another comment on a woman's attire. Double Paralympic world champ Olivia Breen said she was left "speechless" when an official at the English Championships criticized her sprinting shorts. This time, for being "too short and inappropriate." The 21st century called, women can wear whatever they damn well please.

The Milwaukee Bucks. Yesterday, they beat the Phoenix Suns 105-98. Now, they get to call themselves NBA champs for only the second time in the league's history.