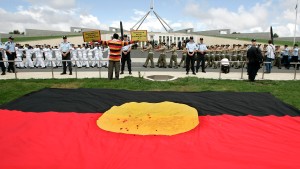 Australia's reckoning with its past.

In 1788, Britain began colonizing Australia, where an estimated hundreds of thousands of Aboriginal people were living. With them, they brought new diseases and violent conflicts, killing thousands. And between 1910 and 1970, the gov took between 10% and 33% of Aboriginal Australian children from their families, placing them with white families and institutions (like schools and church missions). The goal: to assimilate them and essentially erase their identities. Many had their names changed and were forbidden from speaking their native language. The more than 100,000 separated children became known as the "Stolen Generations." Now, Australia's saying 'it's time to make things right.'

Yesterday, Prime Minister Scott Morrison announced a $280 million reparations fund for members of the country's Indigenous population. Those who were under 18 and removed from their families while living in certain Australian territories can get a one-time payment of about $55,000, plus about $5,000 to support their healing. The announcement came months after 800 Indigenous survivors sued the gov. Now, this move could help reduce the social and economic gap between Indigenous and non-Indigenous Australians: Indigenous Australians have a shorter life expectancy and poorer health, and are disproportionately incarcerated.

One Indigenous representative hoped it would give survivors "some relief." But said it'd "never replace growing up with family." These reparations come as other countries address their dark histories. Earlier this year, hundreds of unmarked graves were discovered throughout Canada, shedding light on the country's past and highlighting the systemic abuse of Indigenous communities that saw children taken to residential schools often run by the Catholic Church. In the US, the gov has given minimal reparations to Native Americans. But the country is still grappling with its past, and has launched a review of similar schools that existed in the 19th and 20th centuries.

Western countries have disrupted countless Indigenous communities. Now, Australia's trying to address its past. But a government check may not be enough to course correct the decades of pain, abuse, and discrimination these communities have faced.

Who's trying to shift the nation's gears…

President Biden. Yesterday, he signed an executive order to get more electric vehicles on the road. By 2030, Biden wants half of all new US vehicles sold to be zero-emission (think: EVs and plug-in hybrids). The transportation sector (including ships, trains, and planes) is the country's largest source of greenhouse gas emissions. And EVs can reportedly emit 64% less carbon emissions than petrol cars. Now, Biden's already getting the support of the nation's largest automakers, including Ford and GM. He's also proposing new fuel efficiency and emissions standards – something former President Trump rolled back. The admin says this is all to combat the climate crisis and help create jobs. Critics (like unions) worry the move could lead to job cuts since EVs require fewer parts, which could equal fewer jobs.

Who's got people's attention…

Ebrahim Raisi. Yesterday, the former head of Iran's judiciary was sworn in as the country's new president. In June, Raisi won by a landslide in an election where many of his opponents weren't able to run. Many Iranians believe the election was rigged in favor of Supreme Leader Ayatollah Ali Khamenei's mentee and fave candidate. Now, Raisi's embarking on his four-year term. And he's already eyeing up the US, demanding that "all illegal US sanctions" be lifted. But talks to revive the 2015 nuclear deal have stalled. US sanctions have taken a hit on Iran's oil exports and kept the country out of the world banking system, leaving the economy hurting.

Where people are chasing dreams…

The Tokyo Olympics. Yesterday, the US women's soccer team beat Australia 4-3 to take home the bronze. The Americans kicked things off in Japan as the no. 1 ranked team and reigning World Cup champs. But they lost to Canada in the semifinal earlier this week, ending their chance at the gold medal. In yesterday's match, Carli Lloyd and Megan Rapinoe sealed the deal by scoring two goals each. *Victory dance.* Next up: boxing, basketball, and more events wrap up before the closing ceremony on Sunday at 7am ET. (Psst...our app has you covered when it comes to the final big Olympic events.)

...Oh and in other sporting news, Lionel Messi is hanging up his Barcelona jersey after 17 seasons.

PS: We chatted with some of your favorite Olympians. Here's what they had to say about their sports, teammates, and more.

What's trying to move in a new direction...