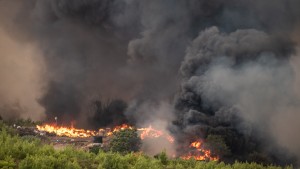 The UN just released an alarming report on climate change.

It's no surprise that climate change is causing major problems around the world. And we've seen its effects in action this summer, with extreme heat waves in the western US and Canada, deadly floods in China, Germany, and India, and more recently massive wildfires in Greece and Turkey. Now, in its first major review since 2013, the Intergovernmental Panel on Climate Change (IPCC) – which falls under the UN – is saying 'things are likely going to get worse.'

Lay it on me. What did the report say?

That human activity is unequivocally causing climate change, and that some of the changes are "irreversible." And that they're impacting every corner of the world. Within 20 years, global warming will likely reach 1.5 degrees Celsius (above pre-industrial levels). No matter what we do to stop it. That hotter temperatures are going to cause more drastic issues, from more extreme droughts and heat waves to rising sea levels and Arctic sea ice melting away. An IPCC official called the report "a reality check."

That's one way to put it. And Mother Earth's saying 'I can't take it any longer.' The report did say it might stop heating up so quickly if we reach net-zero emissions by 2050...and then eventually net negative emissions (when the planet absorbs more carbon dioxide than is released). But that's as big of a group project as eradicating COVID-19. Many countries have pledged to take action like cutting emissions and investing in green transportation. But it may require a more coordinated effort for the planet's sake.

This isn't the first report calling on governments to take action on climate change – but it may be among the most monumental. Now, it's up to leaders around the world to fulfill their promises to curb emissions for the good of the planet and humanity – or conditions around the world are on track to go from bad to worse.

PS: We Skimm'd how climate change can impact your health and your wallet.

The Pentagon. Yesterday, Defense Secretary Lloyd Austin told US service members to get ready to roll up their sleeves for the COVID-19 vaccine. And put out 'save the dates' for mid-September. More than 1 million troops are fully vaxxed. But the vax rate across military branches varies. Concerning, since many service members can live and work closely together. Now, Austin's saying "we need a healthy and ready force" to defend the US. And is giving military leadership a few weeks to prep for the mandate. But the plan is not approved just yet. The Pentagon needs the FDA to fully approve Pfizer's COVID-19 vaccine before it can make the mandate official. Or, in lieu of an FDA 'thumbs up,' it'll need President Biden to sign off on the measure. And he's already shown support for the move.

...Oh and speaking of vaccinations, a new CDC study says those who've already recovered from COVID-19 still benefit from getting pricked. So relying on natural immunity may not be the best option.

PS: The Pentagon isn't the only one moving in this direction. We Skimm'd vaccine mandates in the workplace here.

Prince Andrew. Yesterday, he was sued by Virginia Giuffre – one of Jeffrey Epstein's most outspoken accusers – for allegedly sexually abusing and raping her when she was 17. Giuffre first accused the royal of sexual abuse back in 2014. And has long maintained that Epstein and Ghislaine Maxwell recruited her for that purpose. In the suit, Giuffre alleges that the sexual abuse happened three different times about 20 years ago. And that she "feared death or physical injury" if she didn't follow orders because of their "powerful connections, wealth." Now, she wants to hold "Prince Andrew accountable for what he did to me." In 2019, Prince Andrew denied having sex with Giuffre and said he couldn't recall meeting her – despite the photo evidence.

Roberta Kaplan's. Yesterday, the chairwoman of Time's Up – the org formed amid the #MeToo movement dedicated to fighting sexual abuse – resigned. Last week, Kaplan came under fire after a report revealed her involvement in discrediting Lindsey Boylan's accusations against Gov. Andrew Cuomo (D-NY). Kaplan says she couldn't openly discuss her role since she's a practicing attorney. But over 40 survivors of sexual assault and harassment penned an open letter, calling out the Time's Up board for allegedly "working with our abusers in the shadows." Now, Kaplan's stepped down. And Time's Up said it's working to make itself more accountable.