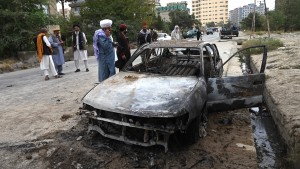 The US is hours away from ending 20 years of war in Afghanistan.

Over the last two weeks, the US and allies have evacuated more than 113,000 people out of the country. But at least 250 Americans and thousands of Afghans are still hoping to catch flights out – despite fears of potential new attacks. Last week, two explosions killed 182 people near the Kabul airport. Among them were 169 Afghans – including a Taekwondo champion, journalists, students, and children – hoping to find new lives abroad. And 13 US service members – 11 Marines, an Army soldier, and Navy corpsman. Over the weekend, President Biden paid tribute to the fallen heroes as flag-draped caskets carried their remains home from Afghanistan.

Yes. Yesterday, a US drone strike thwarted an ISIS-K car bomb from detonating in Kabul. At least three Afghan children reportedly died. Three days ago, another drone strike killed two ISIS-K members. And just this morning, a US missile defense system intercepted five rockets heading towards the Kabul airport. The Biden admin's still on high alert as the deadline to get all US troops out of Afghanistan gets closer. (It's tomorrow.) So, the US and 97 other countries have struck a deal with the Taliban to ensure people who need to get out can do so...safely. Even after US troops are gone. But their departure (and reportedly that of diplomats) may make it harder for Afghans to get travel docs approved. And could leave them few options: stay under Taliban rule or escape to neighboring countries.

What about the people who’ve made it out?

Thousands of Afghan refugees have landed all over the world. From cities in the US to the UK to South Korea, some families are being welcomed with handmade signs and gifts. And food, clothing, and furniture donations are coming in to help refugees who are arriving with little to no possessions. (Here’s how you can help.) The US is reportedly expecting at least 50,000 Afghan refugees over the next year. And over 14,000 have arrived so far. While some countries (hi, Canada, Australia, and Uganda) have vowed to help, others (like Turkey) are starting to close their borders.

The US’s presence in Afghanistan is winding down. But the journey out of the country for thousands of Afghans is far from over. And for thousands of refugees, their life in a new country is just beginning.

Ida. Yesterday, the storm hit southeast Louisiana as a Category 4 hurricane – on the 16th anniversary of Hurricane Katrina. With winds up to 150 mph and an expected 2 feet of rain in some areas, it's tied for the strongest hurricane on record to make landfall in Louisiana. At least one person has died. The storm waters could bring flash flooding and strain levees and pumps meant to reinforce the city. Over a million people in the state lost power, including the entire city of New Orleans. It’s been downgraded to a tropical storm. And Ida is expected to make its way across Mississippi and Alabama later today.

What’s back in the lesson plan…

Masks. On Friday, a Florida judge blocked Gov. Ron DeSantis’ (R-FL) exec order banning schools from imposing mask mandates. In July, the governor issued the EO giving parents the final say over whether their kids should wear masks in class. And threatened to cut funding for schools that ignored the order. But as Florida’s COVID-19 cases and hospitalizations rose, at least 10 school districts ignored DeSantis and told their students to mask up. Some parents decided to step in and sue the Florida state gov. Now, a judge is telling DeSantis 'you don't have that kind of power.' And told the Florida Dept of Education it can't punish school districts.

Sirhan Sirhan. On Friday, the man who killed Sen. Robert F Kennedy was recommended for parole by a California parole board. He's spent 53 years in prison for shooting RFK (former pres JFK's brother) to death during his primary victory as he pursued the Dem nomination for president. Sirhan's applied for parole 15 other times. Now, his parole rec could reach Governor Gavin Newsom's (D-CA) desk. It's unclear if it'll be approved.