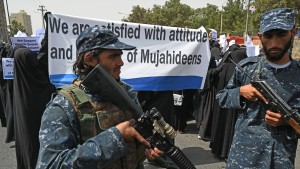 Rolling Back the Clock

The Taliban’s editing the lesson plans for Afghan women in higher education.

It’s not. In the late-1990s when the Taliban last controlled Afghanistan, women were banned from going to school and work. And couldn’t leave their homes without a male chaperone. They could be killed if they didn’t follow the rules. But things changed when the US toppled the Islamist militant group in 2001. Since then, women have reportedly made up at least 25% of the student population at public universities, sitting side by side with their male peers, no dress code required. Now, the Taliban’s rolling things back.

Yesterday, the group said women can continue to study at universities. But it’ll be under the Taliban’s strict interpretation of Sharia (Islamic law). Women will be segregated from male students. And can only be taught by female teachers. They’ll also be required to wear a hijab in the classroom. (It’s unclear if they'll be required to wear a headscarf or full face covering.) Oh, and the Taliban’s reviewing the subjects taught in universities to reportedly make sure that they’re in line with “Islamic, national, and historical values.”

Over the weekend, several hundred women turned out at a Kabul university carrying pro-Taliban signs. But the presence of Taliban fighters there had people wondering whether the event could have been staged. Meanwhile, critics are pointing to a shortage of resources for women, including facility space and female teachers. And there are several women who’ve been protesting daily, calling for equal rights. Often, they’re putting themselves at risk of the Taliban’s violence.

The Taliban may want extra credit from the international community for allowing women to continue getting an education, even as they restrict what they study, how they dress, and who they sit with. It's got many saying Afghanistan's women deserve better.

What hasn’t given much closure…

An FBI 9/11 report. On Saturday, the bureau released its first declassified document from its 9/11 investigation. The document – which came out on the 20th anniversary of the attacks – looked into allegations that Saudi officials helped two hijackers with logistics. But it doesn’t provide evidence that senior kingdom officials were complicit in the attacks. And in 2004, the 9/11 Commission said it found “no evidence” that the Saudi gov funded al-Qaeda. President Biden had ordered for records to be declassified amid pressure from victims’ families who are suing the Saudi gov for their alleged support. More docs could come out in the next six months. Meanwhile, the Saudi Embassy in Washington maintains that allegations against the kingdom are “categorically false.” A family member of a 9/11 victim said that the release “accelerates our pursuit of truth and justice.”

Where the new laws are apparently bigger...

Texas. Last week, Gov. Greg Abbott (R-TX) signed a bill banning social media companies from removing users or posts "based on their political viewpoints.” And requiring companies to create reports on the content they’ve taken down. Abbott’s the latest Republican lawmaker who has accused social media companies of censoring conservative voices. And says social media has become a “modern-day public square” where info “should be able to flow freely.” But legal experts say it could violate companies’ First Amendment rights. (Yup, they have those.) Now, citizens will be able to sue social media companies that violate the law. But the new measure – scheduled to go into effect in December – could come across some legal trouble after a judge blocked a similar law in Florida.

Who’s making quite the racket…

Who's ready for even more vaccine mandates...

Dr. Anthony Fauci. We talked to him after the government's recent roll out of requirements for federal workers and companies with over 100 employees. His stance on whether that will one day extend to airlines and public schools is here.

Who's singing 'all eyes on me in the center of the ring'...