Daily Skimm: Poverty in the US, No-Knock Warrants, and Apple 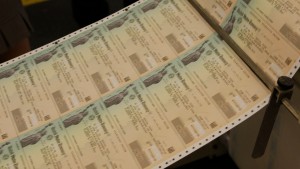 The annual check in on Americans’ finances is in.

Yesterday, the US Census Bureau delivered its 2020 review of income and poverty in the US. (Note: Last year, the average poverty threshold for a family of four was about $26,000. It jumps down to around $13,000 for a single individual.) Early last year, America lost 22 million jobs as the pandemic rattled and closed entire industries. And saw a record high of unemployment applications (over 6 million in one week). Now, the gov’s providing a clearer picture of just how big of an impact the pandemic and gov aid has had on Americans’ wallets.

Both. The US poverty rate rose to 11% last year. That’s more than 37 million people struggling to make ends meet. (For reference, that’s about 3 million more Americans than 2019.) It marked the first time poverty increased, instead of a steady decrease like the last five years. But once you factor in the five relief bills under then-President Trump, poverty actually dropped to just over 9% – the lowest on record. Stimulus checks and weekly federal unemployment boost kept over 17 million people from poverty. But it’s important to note that Black and Hispanic Americans reportedly experienced more poverty regardless of gov aid.

Experts say this shows that gov aid helps. Democrats hope this report highlights the importance of passing the $3.5 trillion spending bill that could include child care, parental leave, and an extended child tax credit. Last month, Congress passed the blueprint for the spending bill along party lines. But conservatives have remained wary about high gov spending, saying it increases the federal debt and keeps people from working.

The pandemic made it clear that millions of Americans were living paycheck to paycheck. Now as the country’s economy faces a shaky recovery, it’ll be up to lawmakers to decide how to best carry Americans out of a once-in-a-century pandemic.

PS: If you’ve lost income, here’s theSkimm on how to make a new financial plan.

Who’s got people saying ‘you win some, you Newsom’...

Gov. Gavin Newsom (D-CA). Last night, projected results showed he survived California’s second-ever gubernatorial recall election. Critics have tried to remove Newsom as governor at least five times. But amid growing frustration over his handling of the pandemic (among other things), one recall effort made it on the ballot. For weeks, Californians have been voting on whether Newsom should be fired. Now, the Golden State is letting him keep doing his job. It’s a sigh of relief to Dems who worried a new governor could appoint a senator in the event of a vacancy and tip the 50-50 Senate divide. But some state Republicans are already throwing around words like 'voter fraud' without any evidence. As for Newsom, he's channeling his inner Pottery Barn and saying he's "humbled" and "grateful" to have survived the recall.

The Justice Dept. Yesterday, it said it’s restricting the use of chokeholds and “no-knock” warrants among federal agents. Last year, Breonna Taylor was killed by police in her home following a no-knock warrant. Her name became a rallying cry at racial justice protests against police killings of Black Americans. And was a catalyst in national calls for police reform. Some local govs have since banned no-knock warrants and neck restraints (including chokeholds). Now, the DOJ’s making similar moves. Attorney General Merrick Garland said the move would help improve law enforcement “safety and accountability.”

Where people are pointing fingers...

Haiti. Yesterday, a chief prosecutor accused Prime Minister Ariel Henry of being tied to late-President Jovenel Moïse's assassination. In July, gunmen attacked Moïse’s Port-au-Prince home, killing him and wounding his wife. Dozens of suspects have been arrested but authorities are still investigating. The prosecutor says Henry spoke to a key suspect hours after the attacks. And that he failed to show up for questioning. Now, he wants Henry charged and barred from leaving the country. Henry's response? 'You're fired.’

The Wall Street Journal. Yesterday, the newspaper reported that Facebook's known about Instagram's harmful effects on teen girls. And that it's been researching it since 2019 – including its impacts on teens' anxiety, depression, and body image issues (like "Instagram face"). The research has even been reportedly reviewed by top Facebook execs. But the company has allegedly been downplaying the reviews for years.

Norm Macdonald. Yesterday, the comedian known for his role on “SNL’s” “Weekend Update” died at age 61 after a long battle with cancer.

While Apple has unveiled new iPhones…

Make sure you update your current one.