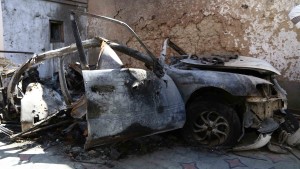 The US has killed innocent civilians in Afghanistan.

This has happened before.

It has. The civilian death toll of the US's nearly 20-year war in Afghanistan is in the tens of thousands. And while the US has acknowledged responsibility for some deaths, experts maintain the true number could be in the hundreds. Which brings us to this latest attack: Last month, as the US worked to withdraw from Afghanistan, two suicide bombings near Kabul airport killed over 100 civilians and 13 US service members. ISIS claimed responsibility. And President Biden vowed revenge. On August 29, the US launched a drone strike on a vehicle believed to be affiliated with the terrorist group. Ten people were killed. Except the US military made a "tragic mistake."

It wasn't an ISIS threat. The strike killed Zemari Ahmadi – a technical engineer, who worked for a US aid org – and his family members. That includes at least seven children, some as young as three years old. The US has apologized. But the attack's reportedly shaken the family’s faith in America. They're still looking for justice – including a potential court trial and compensation. And are asking to be relocated to a safer country. Meanwhile, the Biden admin – which was already getting flak for its rushed withdrawal – is facing a new wave of criticism. And all this is reigniting a broader conversation about remote killings.

The first drone killing happened in the fall of 2001 – also in Afghanistan. And as with this latest killing, the US was responsible. Today, dozens of countries are believed to own military drones – for everything from surveillance to targeted assassinations. Last year, Israeli agents reportedly used a remote-controlled machine gun to kill a top Iranian nuclear scientist. The US has justified its targeted attacks for years. That's because drones could mean fewer US soldiers – and civilians – in harm's way from things like aerial bombings or in-person raids. The counterargument: the risk is still high.

This was not the first time the US's drone policy has killed innocent civilians. But the recent attention on Afghanistan has forced the Biden administration to reckon with its mistakes on the battlefield there – and the human beings that suffer as a result.

Texas. Last week, the state saw another jump in Haitian refugees arriving at the US-Mexico border. For months, thousands of Haitians have been making the dangerous trek from South America. They’re seeking asylum in the US and are trying to escape poverty and political turmoil back in Haiti. But the number of migrants has ballooned as US immigration officials try to process their claims – prompting a humanitarian crisis. Now, the Biden admin has sent hundreds of agents to the border and began deporting Haitians back to their home country. But Democrats have called on the admin to halt deportations while the country tries to figure things out.

Who's not exactly feeling cuffing season...

France. On Friday, it recalled its French ambassadors to the US and Australia. It comes after the Aussie gov joined forces with the US and UK to get nuclear-powered submarines under a new deal (AUKUS). And dropped France from a $66 billion agreement for less-techy submarines. AUKward. Now, for the first time ever, the French gov has phoned its ambassador to the US home. And called America’s actions “unacceptable behavior between allies and partners.” Le gasp. The US says it’s working to “resolve our differences.” And the two countries' presidents are expected to have a little chat about it this week. In the meantime, oui all live in a submarine dispute.

Where people are heading to the polls...

Canada. Today, Canadians will be voting in a parliamentary election. Last month, Prime Minister Justin Trudeau called for a snap federal election in hopes that his Liberal Party would gain a majority in the House of Commons. But critics said ‘really? We’re in a pandemic.’ Trudeau’s weeks of campaigning have brought out violent protesters who aren’t a fan of his coronavirus vaccine mandates. Now, voters will decide whether they give Trudeau’s party more power. Or, hand a win to Conservative Party leader Erin O’Toole. Pollsters’ crystal ball says that neither party will win enough seats for a majority gov. Meaning, Trudeau could be thinking ‘this could’ve been for nothing.’ Oh, snap.

The Emmys. Last night, the awards show made “The Crown,” "Ted Lasso," and "The Queen’s Gambit" feel like royalty. But while RuPaul raced into the record books, a record number of diverse nominees were shut out of wins in the lead categories, prompting feelings of déjà vu...and the hashtag #EmmysSoWhite.