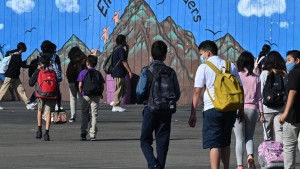 Get the Lollipops Ready

There could soon be a COVID-19 vaccine for kiddos.

Probably. For a while, many children were believed to have been spared from severe illness. Since the pandemic began, over 5 million cases have been reported among children and teens. But the delta wave has increased hospitalizations among youngins. And at least 460 children have died from the virus. In some cases, others have gotten “long COVID” or an inflammatory disorder. While vaccinations have helped save adults from severe complications of COVID-19, only children 12+ have been able to get the shot. But that could be changing.

Yesterday, Pfizer said their shot is safe and effective among 5- to 11-year-olds. The company carried out a trial of more than 2,200 children. And gave the majority two doses of 10 micrograms (a third of what adults receive) three weeks apart. The others got a placebo (in this case: doses of saltwater). Pfizer said the children who got vaxxed produced antibody levels similar to those seen in young adults. And that there were fewer side effects (think: fever, chills) in children. Now, Pfizer could ask the FDA for emergency use by the end of this month. And if all goes according to plan, parents may be making doctor visits by Halloween.

Throughout the pandemic, parents have been juggling at-home schooling and work. And with class back in session, many are dealing with a tug of war over mask mandates. Now, parents could soon have some peace of mind about sending their children to school, play dates, or even grandma’s house. But others may be hesitant. Regulators will be making sure that the shots are really good to go. Especially since heart inflammation has been a reported side effect. Although Pfizer claims no instances of the condition were found in their trial. Note: It’ll be months before the company rolls out trial results for kids under 5. Meanwhile, Cuba’s already offering shots to kids as young as 2. This month, the island started the world’s first mass vax campaign for children – using its own vaccines. It’s part of an effort to get 90% of their population vaxxed and its borders reopened before the end of the year.

Many families have been waiting for a vaccine to protect their children from COVID-19. Now, that could be a reality – just when the country is getting ready to loosen restrictions for our international friends.

Texas’s abortion law. Yesterday, two people (who don't live in Texas – and don't support the law) sued a doctor there for performing an abortion. This is the first known person to be sued under the state’s controversial measure. Over the weekend, the TX doc came forward and said he violated the Texas Heartbeat Act to help a woman who had a "fundamental right to receive this care." Remember: The law allows private citizens to sue anyone they believed helped a woman get an abortion. And awards at least $10,000 for a successful lawsuit. Now, these cases could reignite the debate on the constitutionality of the law – which is especially important since the Supremes refused to block it from taking effect.

...Oh and speaking of SCOTUS, more than 500 current and former female athletes called on the Supremes to protect abortion rights.

The southern border. This week, photos and video of the situation near Del Rio sparked outrage. In them, Border Patrol agents can be seen chasing Haitian migrants on horseback with what appeared to be whips. The White House called the images "horrific." For weeks, thousands of Haitians have been making the dangerous trek from South America to the US border in hopes of getting asylum. Many Haitians were already living in South America after the 2010 earthquake. But experts think the surge may have come from misinformation that the Biden admin is more welcoming to migrants. Now the massive influx of migrants has made it difficult for US immigration to process their claims. And many have already been deported back to Haiti to face uncertain futures. (Remember: the country is still reeling from a presidential assassination and back-to-back natural disasters.) Meanwhile, Democratic lawmakers are reportedly calling for accountability at the border. And the Department of Homeland Security said they are opening an investigation into the incident.

Burnout. This month, a new study apparently found that the average American’s workweek has gotten 10% longer. It’s no secret that COVID-19 has changed how Americans work and function. But this study’s saying it’s pushed many to stay logged on longer than before. Experts reportedly say the blurred lines between home and work life have made things worse. Because WFBed isn't what dreams are made of.

Psst...There are several pros to working from home. But burnout – from anywhere – is real. Here are some tips on how to manage it.

Amy Schumer. This week, the comedian revealed she had her uterus and appendix removed because of endometriosis. The condition – estimated to affect over 6 million women in the US – is when tissue typically found in the uterus grows outside of it. And could lead to painful periods, fatigue, and more. Now, Schumer wants to bring attention to the condition.

PS: Endometriosis is tricky to diagnose. In a “Skimm This” ep, we asked medical experts what it is and how we can treat it. Plus, we spoke to one Skimm'r about what it's like living with endo.