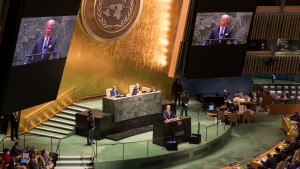 America's in the spotlight.

The United Nations General Assembly is back in action. Every year, leaders from 193 member countries get together in NYC to discuss the biggest topics going on in the world (think: climate change, COVID-19, Afghanistan). Unlike last year's mostly virtual event, people are there IRL. And after an alienating appearance by former President Trump in 2019, all eyes were on whether President Biden would sing a different tune. Spoiler alert: He did. Yesterday, Biden urged leaders that America is back to working together, promising “a new era of relentless diplomacy.” But not everyone was cheering.

America has to prove it can still be a world leader. Biden’s speech came after he’s received widespread criticism for the US’s chaotic exit from Afghanistan. And after France felt snubbed by the AUKUS ménage à trois: when the UK, US, and Australia closed out a high-tech submarine deal, leaving their French friends out to dry and $66 billion shy. It hasn't helped ease ongoing US-China tensions either. Let's not forget the Iran nuclear deal. Oh and booster shots. While the US is already providing a bonus shot to some immunocompromised people, the WHO keeps reminding them that many other countries haven't even gotten the chance to get one dose yet.

Biden said his priority is “rebuilding our alliances” and “revitalizing our partnerships.” And fighting climate change. Biden also emphasized that there needs to be a united front against challenges like the once-in-a-century pandemic, which can’t be solved with “bombs and bullets.” He reminded the assembly that the US has invested more than $15 billion toward the global coronavirus response. Meanwhile, UN Secretary-General António Guterres called out "billionaires joyriding to space while millions go hungry on Earth" – telling the world to get it together. And the Taliban apparently said ‘where’s our invite?’

President Biden has tried to convince leaders that America’s here to play nice. But his latest decisions – from Afghanistan to AUKUS – may have some thinking he’s not far from the predecessor he’s trying to distance himself from.

The US Treasury Dept. Yesterday, it sanctioned a cryptocurrency exchange – SUEX – for allegedly acting as a middleman in ransomware attacks. This kind of cyberattack has affected the US gov and major companies several times this year. (Think: Colonial Pipeline and the world's largest meatpacker.) And orgs have had to pay big (totaling more than $400 million last year) to get back to work. Now, the gov’s saying at least 40% of SUEX's transactions are criminal. And could be making an example out of the company for its alleged role in helping hackers pocket their crypto-ransomware payments. The Treasury could also make it harder for SUEX to work with US companies. Meanwhile, the Dept’s urging Americans who are hacked to report it to law enforcement. And said that paying the ransom could be illegal for US orgs. The sanctions are the first against a virtual exchange.

Psst…from basic vocab to whether it’s right for you, we Skimm’d what you need to know about crypto.

Gov. Greg Abbott (R-TX). Last week, he signed a bill that restricts the use of abortion-inducing pills. In the US, 60% of women reportedly choose the medication as an alternative to the surgical procedure. Now starting in December, Texas will prevent physicians from providing the medication to people who are more than seven weeks pregnant. (That’s shorter than the 10-week limit under the FDA.) And will block the pills from being mailed out altogether. Those who break the law could face up to two years in jail and a $10,000 fine. It's the state's latest attempt to control women's bodies and their "fundamental freedoms."

PS: We Skimm'd what you need to know about Roe v. Wade and the legal battle around abortion rights in the US.

Willie Garson. Yesterday, family confirmed that the actor known for roles in “Sex and the City” and “White Collar” died. Garson was 57. Tributes on social media called him “brilliant” and a “source of light.”

These companies. Yesterday, Amazon, Facebook, Pfizer, and UPS – and 29 others – pledged to hire and train Afghan refugees in the US. Chobani’s CEO created the coalition in an effort to help tens of thousands of Afghans jump-start their new lives.

Where Change is Brewing...

ESPN. On Sep 29, the sports network is having its first all-female broadcast team (hi, Melanie Newman and Jessica Mendoza) for an MLB game. Bases are loaded with change.

What may be a tender idea...

An insect-based diet for pets.