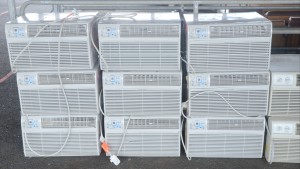 I slept through chem class.

HFCs for short. They're powerful greenhouse gases typically found in AC units and fridges. And in leaky US supermarket freezers. In the 1980s, HFCs were considered a better option than, bear with us, chlorofluorocarbons (CFCs). But as it turns out, HFCs are thousands of times stronger than carbon dioxide at trapping heat and warming the Earth. Last year, Congress passed a bipartisan law saying ‘cool down the use of HFCs.’ And the EPA said 'hey, we have an idea.' Now, the Biden admin’s following up on it.

Yesterday, the EPA issued a rule to cut down HFC production and use by 85% over the next 15 years. The agency will continue to scale back over time. The Biden admin also launched a task force to prevent people from illegally importing or producing the substance – something European countries have been dealing with. It's apparently the first time the gov's set nationwide standards on HFCs. And the transition to more energy-efficient cooling (like ammonia) could save the US over $270 billion over 30 years. If other countries get on board, the EPA estimates that the Earth could avoid 0.5°C of warming by 2100.

The White House says the new rule will create "and maintain" hundreds of thousands of jobs. And gov officials are calling it a major win in the fight against climate change. But some were apparently hoping the gov would speed up its timeline to phase HFCs out. And other critics fear the new rule could mean extra costs for businesses (think: to update all their appliances). Meanwhile, the Biden admin isn’t done talking about climate change yet. Next on the agenda: the United Nations climate change conference in November. That’s when the US is expected to update the world on how its climate goals are coming along.

More and more people are using ACs and fridges with HFCs. Now, the Biden admin is looking to make some changes – but there are still plenty of other household objects that add to a carbon footprint. Here's how to calculate yours.

Where a picture was worth a thousand words...

Del Rio, Texas. Yesterday, the Department of Homeland Security (DHS) temporarily halted horse patrols there. Over the weekend, the number of Haitian migrants trying to apply for asylum to the US topped 14,000. Authorities have been trying to curb border crossings – patrolling the area by car and horseback. But images of Border Patrol agents have prompted accusations that they whipped migrants with horse reins. Now, DHS is saying ‘no more horses’ as it investigates. The move comes a day after US special envoy for Haiti, Daniel Foote, resigned. Foote blasted the Biden admin for its “inhumane” and “counterproductive decision” to deport hundreds of Haitians back to the Caribbean island. Especially as Haiti’s dealing with the aftereffects of natural disasters and a political crisis. The State Dept called Foote’s resignation “unfortunate.” And has yet to name a new envoy.

Tigray. This week, reports revealed that people are starving to death in Ethiopia’s northern region. In June, the Ethiopian gov declared a ceasefire after a months-long conflict with the Tigray People's Liberation Front (TPLF) – a regional ruling party. But since then, the gov has reportedly tightened its control of the region and rejected humanitarian aid. The UN had warned that over 400,000 people in Tigray were suffering from famine. Last month, at least 150 died. Now, reports say that residents in every one of Tigray’s 20+ districts are dying from hunger. And that some people reportedly only have green leaves to eat. The US is calling on the Ethiopian gov to end the fighting and let humanitarian orgs into Tigray, or risk sanctions. But the gov has denied there’s any famine. And has put the blame on the TPLF for blocking aid.

The EU. Yesterday, officials announced plans to require smartphone companies to use the same charging cord for phones. For years, certain companies (cough, Apple, cough) have strayed from more universal charging ports – likely creating an overflow of cords in your junk drawer. Now, the EU's saying 'I USB-C what's happening here.' And is pulling the plug on plugs that don't spark joy. The goal: to help the bloc cut down on tons of electronic waste. But Apple's reportedly worried this will restrict its creative freedom. Because nothing screams 'creative' like a charger that doesn't fit anything.

What parents should get rid of…

Boppy loungers. Yesterday, the Consumer Product Safety Commission recalled over 3 million Boppy infant loungers due to the risk of suffocation. It comes after eight infant deaths in the past five years.

What all you cool cats and kittens want…

The zaddy of the moment.