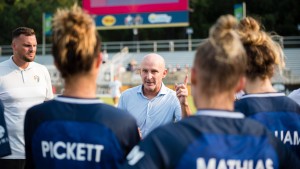 The National Women’s Soccer League has been rocked by sexual abuse allegations.

Last week, The Athletic published more than a dozen NWSL players’ stories of verbal and sexual misconduct, including at the hands of coach Paul Riley (the North Carolina Courage). One former player described how Riley allegedly coerced her into having sex in his hotel room. Another said Riley forced her to kiss a teammate so he could watch. Others detailed the verbal abuse (think: weight and sexual orientation comments) they reportedly suffered under Riley’s coaching. And said the NWSL dismissed their concerns and still hired coaches for different teams. Now, the nine-year-old soccer league is coming to terms with its years of inaction.

The Courage fired Riley hours after the allegations went public. And the US Soccer Federation suspended his coaching license. It came after the NWSL had already cut loose another coach – the Washington Spirit’s Richie Burke – following a separate harassment investigation. The league canceled five games amid the allegations. NWSL commissioner Lisa Baird resigned and general counsel Lisa Levine was ousted. And now, multiple probes – including from former acting Attorney General Sally Yates and FIFA – are looking into the allegations. Riley’s denied the claims. But the players say the systemic abuse has been rampant for years.

Riley’s the third head coach to be fired after accusations of abuse since August. And Women’s Professional Soccer – the NWSL's predecessor – dissolved in 2012 partly because of allegations of bullying. US Soccer star Alex Morgan called out the NWSL for failing to “protect its own players.” And athletes are blasting the league’s actions as “unforgivable,” adding that they don’t feel safe at work after officials protected their abusers. Now, the women want the NWSL to better defend them against future abuse. And they’ve got other soccer orgs like Canada Soccer on their side.

Another wave of sexual abuse allegations has shaken up the sports world. And it has female athletes calling out their abusers and the large entities failing to keep them safe.

The European Union. Yesterday, Europe’s top health regulator gave the green light for COVID-19 booster shots. Specifically, it recommended a third dose of the Pfizer vaccine six months after a healthy adult’s second shot (earlier if they’re immunocompromised). The move is a major departure from the FDA’s approach – which largely restricted its booster recommendation to those 65 and up, immunocompromised or at high risk of exposure. And highlights how in this stage of the pandemic, different gov agencies can have vastly different approaches on interpreting the data for how best to fight COVID-19.

Who's about to lose a lot of followers...

Facebook. Today, Frances Haugen – the whistleblower who leaked research on the harmful effects of social media to the press – is testifying in front of a Senate subcommittee. Facebook’s internal research had found that Instagram negatively impacted young teens. The company allegedly knew about it. But downplayed it. A FB exec was in the committee’s hot seat last week – but now, lawmakers want to hear from Haugen herself. Including her eight complaints filed with the SEC about how Facebook misled investors and the public.

...Oh and speaking of unrest, FB, Insta, and WhatsApp had people constantly refreshing. Turns out, networking issues are to blame for the six-hour outage yesterday. At least we had LinkedIn.

Whose contributions have been ignored…

Henrietta Lacks’. Yesterday, her family sued a biotech company – Thermo Fisher Scientific – for allegedly selling their late family member’s stolen cells. In 1951, doctors at Johns Hopkins Hospital took tissue from the Black woman’s tumor (without her consent) before she died of cervical cancer. Lacks’ cells (known as HeLa cells) were the first human cells to be successfully cloned. And have led to scientific and medical breakthroughs like a polio vaccine and gene mapping. Now, her family’s saying doctors exploited her – and many other Black women – as part of a “racially unjust medical system.” And want the company to stop using the cells without the estate's permission. On its website, Johns Hopkins says it should’ve “done more” to work and respect her family. And that it hasn't sold or profited from her cells.

While this captain's soaring to space...