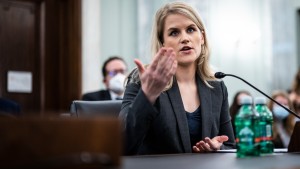 Give me the status update.

Last month, The Wall Street Journal reported leaked findings from Facebook's internal research on Instagram's harmful effects. Especially on teens – and how the app negatively impacts their mental health. Cue: senators calling two hearings about all this. A Facebook exec defended the social media giant, saying most users have a positive experience with the app. Amid it all, no one knew the whistleblower's identity...until former Facebook product manager Frances Haugen entered the chat. Now, she’s telling the Senate subcommittee everything she knows.

What’s on her mind?

A lot. She said FB knew it was promoting anorexia content to young users. That different "authoritarian or terrorist-based leaders" (like China or Iran) were using the site to spy on people. And that from what she'd seen, execs would rather risk misinformation than risk losing money. (Haugen has said the company actually disbanded the Civil Integrity team right after the 2020 presidential election.) Now, she’s calling on Congress to regulate social media and make it possible for people to sue companies over algorithms that promote harmful content.

CEO Mark Zuckerberg said Haugen's testimony painted a "false picture." And that the company cares "deeply" about safety. An FB spokesperson also tried to discredit Haugen, saying she hadn't worked on anything Instagram-related and had "no direct knowledge" of FB's work on child safety. Then, the company told Congress 'if you want us to follow rules, you gotta make them.' Meanwhile, there could be more revelations in store. That’s because Rep. Adam Schiff (D-CA) is saying Haugen should testify about how FB could have played a role in the Jan 6 insurrection.

Facebook can’t seem to catch a break. But that’s because the social media giant’s continued to raise alarms – on everything from national security to child safety. And these testimonies might not let up until Facebook does something about it...or until Congress decides to act.

Whose dark history has been unveiled...

The French Catholic Church’s. Yesterday, an independent commission said that thousands of French Catholic clergy abused over 200,000 children in the past 70 years. And that the majority of the victims were boys – many between the ages of 10 and 13. For two and a half years, officials gathered over 6,000 testimonies – from victims and witnesses – about abuse dating as far back as the 1950s. Now, after previewing the report earlier this week, the commission’s saying church officials turned a blind eye, allowing abuse to continue. And called on the church to compensate the survivors and educate clergy on children’s rights. While some cases passed the statute of limitations, others have been handed over to prosecutors.

Ernest Johnson. Yesterday, the 61-year-old Missouri man was executed by lethal injection despite calls for clemency. Johnson – who is Black – received a death sentence for killing three people during a robbery in 1994. But his lawyers argued that it was unconstitutional to give Johnson the death penalty because he’s intellectually disabled. Supporters – including Pope Francis – urged Gov. Mike Parson (R) to stop Johnson’s execution. But Parson said the state would move forward and “deliver justice.” And the US Supreme Court denied a request to stop it. Before his death, Johnson reportedly apologized for his crimes and thanked his lawyers for their support. His execution was Missouri's first since May 2020.

What’s been pulled over...

Tesla. Earlier this week, a San Francisco jury ordered the EV company to pay nearly $137 million to a former worker over a discrimination lawsuit. In 2015, Owen Diaz – who is Black – was contracted as an elevator operator. During his time at Tesla’s Fremont plant, Diaz said he was subjected to a racist hostile environment – where he dealt with “daily racial epithets” and was told to “go back to Africa.'' Diaz sued. Now, a jury’s saying ‘we hear you’ and awarded damages. Diaz said “a big weight” was lifted off his shoulders. Tesla’s saying they’re “not perfect” and have come “a long way” from five years ago.

What’ll probably be checked out at libraries...

This memoir and this magazine.