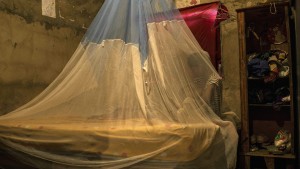 A Shot of Hope

There’s a new tool to combat one of the world’s deadliest diseases.

Are we talking about COVID-19?

Not this time. We’re talking about malaria. The mosquito-borne disease is one of the world's oldest diseases (up to 30 million years old). It kills over 400,000 people each year, and can seriously weaken the immune systems of those who survive it. Forty countries and territories around the world (including the US) have used things like insecticides and antimalarial meds to get rid of it. But nearly 95% of malaria deaths happen in Africa – mainly among children under 5. Mosquitoes thrive in sub-Saharan Africa in part because of its tropical climate (ideal for the insects to spread the disease). And the region's been waiting for a miracle.

And now we have one?

We might. In a historic move, the World Health Organization backed the world’s first malaria vaccine for children. After decades of research, the shot (Mosquirix) got the green light for distribution in Africa and other high-risk areas (think: Southeast Asia, the Eastern Mediterranean). The four-dose vaccine attacks the deadliest of malaria parasites. And trials involving 800,000 kids in Kenya, Malawi, and Ghana showed the vax reduced severe cases by about 30%. (Note: no data yet on whether it's lowered the death rate.) But one study found that when combining antimalarial drugs with the vaccine, hospitalizations and deaths decreased by about 70%. But it's not a miracle cure – the WHO still suggests using things like medications and insecticide-treated bed nets.

Health experts see it as a game changer. One study found the vax could prevent over 5 million cases and 23,000 child deaths every year. But some are raising concerns about Mosquirix’s efficacy rate. It’s far lower than other childhood vaccines like measles and polio, which are over 90% effective. And that could deter global orgs from investing in the shot's distribution. Not ideal, since it could already take more than a year to get doses out. And COVID-19 only complicates that process. Still, the WHO’s saying ‘anything is better than nothing.’ Especially since other malaria shots are reportedly five years behind Mosquirix.

In recent years, lack of funding and political support have snagged malaria eradication efforts around the world. And while there are still some unknowns with Mosquirix, the world’s celebrating a scientific breakthrough that could save millions of lives.

Where a federal judge is (Roe v) Wading into the picture…

Texas. Yesterday, a federal judge blocked the new abortion law there. Specifically, the one that bans abortions as early as six weeks into a pregnancy and puts the onus on private citizens to witch hunt on each other. Sound familiar? The law stunned many, apparently even some who are anti-abortion rights. But despite protests and pleas for the Supreme Court to step in, it went into effect last month. Now, a Texas judge is hitting the brakes. He accused state legislators of an "aggressive scheme" to rob citizens of their constitutional right to get an abortion. And halted the law immediately.

What’s got the Biden admin’s attention…

Student loan forgiveness. Yesterday, the Education Dept said it’s overhauling the gov’s Public Service Loan Forgiveness Program. Under the 2007 law, the gov forgives remaining federal student loan debt for public servant employees...only if they’ve made monthly payments for 10 years while working in their role. But the program's been hard to figure out. And customer services aren’t exactly providing, well, services. Only about 5,500 people have had their balances go down to $0. Now, the Education Dept’s saying 'we're working on it.' And will make it easier for military members and other fed employees to also benefit. The move could help over 550,000 borrowers.

PS: We Skimm'd what forgiveness could mean for everyone, whether you have public, private or no student loans.

Where health care disparities are top of mind…

California. Earlier this week, Gov. Gavin Newsom (D) signed a law aiming to close racial gaps in maternal and infant deaths. The "Momnibus Act" will expand state Medicaid eligibility for those who can't afford services. And applies to people up to a year after giving birth, regardless of their immigration status. It will also provide coverage for doulas – professionals who support mothers during pregnancy. And will support the midwifery workforce via a new fund. This is all part of an effort to help reduce racial disparities – an issue that's especially relevant in the US, where Black women are three times more likely to die from causes tied to pregnancy than white women. Advocates for maternal health applauded the measure but are pushing for a federal version.