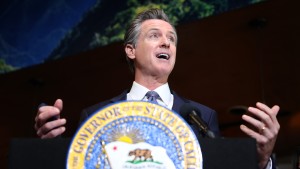 Removing a condom without consent is now illegal in California.

It’s called stealthing. In 2017, a paper by former Yale student Alexandra Brodsky brought attention to nonconsensual condom removal during sex. It's more common than you may think: One study found that 12% of women ages 21-30 have been victims. And 10% of men have said they’ve ditched the rubber without telling their partner. But the numbers could be much higher given that only some countries (like Germany, Australia, the UK) define it as sexual assault. It's often hard to bring the cases to court. And stateside, efforts to crackdown on stealthing haven’t made it far...until now.

Last week, Gov. Gavin Newsom (D-CA) signed a law that makes stealthing a civil offense. It’s the first law of its kind in the US. And gives victims a legal avenue to sue perpetrators in civil court for damages (think: money to pay for therapy or medical bills). Newsom said the law highlighted "the importance of consent." And advocates for sex workers – who are also impacted by stealthing – applauded the measure. Some want the law to go even further (think: into the criminal code so offenders get jail time). Others wonder how stealthing will be proven in court. And it wasn't the only thing on CA's agenda.

The Golden State is also cracking down on spousal rape. While marital rape is illegal in all 50 states, CA (and eight others) had put it in a different category – with less severe punishments. But the new law changes that, making clear rape is rape. And the state's also focusing on menstrual health. It'll require all public schools and colleges to provide free menstrual products next fall. (About time.) On top of that, it's telling department stores to create gender-neutral sections to show certain products. (But can we get rid of the pink tax, now?)

California’s setting the pace for progressive legislation on sexual health. But that means there are still 49 states where people can remove condoms without consent, resulting in STIs, unwanted pregnancies, and nonconsensual sexual experiences.

136 countries. Over the weekend, they agreed to a minimum 15% tax rate for multinational corporations. For those counting, the number represents over 90% of the global GDP. Earlier this year, Treasury Sec Janet Yellen called for a minimum global tax rate for companies. The reason: if everyone taxes the same, then corporations may be less likely to relocate their money offshore. And there could be less competition between countries trying to attract businesses. Last week, Ireland and Hungary agreed to join Yellen’s fight. Now, the deal will allow countries to bank $150 billion in new revenue each year. The plan is to put it into effect in 2023.

Where the vaccine debate is escalating…

Texas. Yesterday, Gov. Greg Abbott (R) signed an executive order banning companies – including private businesses – from mandating vaccines. The decision comes weeks after President Biden mandated companies with 100+ employees to get vaxxed or face regular tests – a move Abbott called government overreach. The governor had already banned vaccine mandates by state and local government agencies. Now, he’s reached into his own pocket to sign his own antimandate...mandate. And said that private workplaces in Texas cannot ask anyone to get their shot if they object to it for “any reason of personal conscience.”

Who used Indigenous Peoples' Day as a call to action...

Indigenous communities. Yesterday, hundreds of Indigenous climate activists gathered in DC to pressure President Biden to declare a national climate emergency. The protesters – reportedly traveling from as far as Oklahoma and Minnesota – are concerned with the environmental impact of climate change. And demanded an end to fossil fuel pipelines that they say violate tribal land and threaten water safety (see: this month's CA oil spill). The protests began on Indigenous Peoples' Day, and are set to continue through the week.

These winners. Yesterday, three US-based professors won the Nobel Prize in economics for their work on natural experiments. Through their research, they were able to show how experiments in the wild (think: outside of a lab) could yield quality research on how things like immigration and the minimum wage impact labor markets. They have our interest.

Who's calling out not just anybody…